The Legion of Frontiersmen . 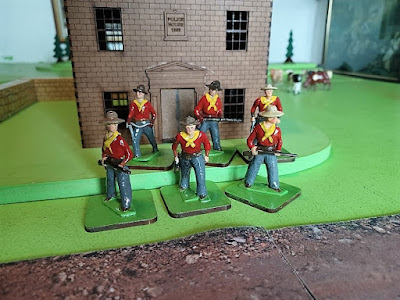 In response to the unrest amongst the Patio-gonian Indians the 'Red Army' command has formed companies of frontiersmen to patrol the boarders of the Great Patio and combat any incursions  . Unfortunately poor of Goverment funding has resulted in a total lack of horses to aid in their patrols * . Here we see a unit of the Legion outside their Patrol House . 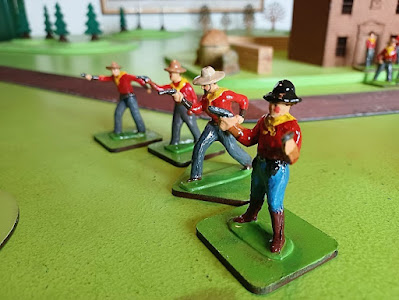 They are armed with reapeating carbines and a array of 'six-shooters' and have been uniformed in red flannel shirts and yellow bandannas . These are some of the figures I have been stripping recently, some of them came with especially manky paint jobs and quite a few were badly flashed/miscast - but a coat of varnish hides a multitude of sins . Hopefully appearing on the tabletop soon .
*hollow cast mounted cowboy are few and rather expensive on eBay .
Posted by The Good Soldier Svjek at 06:38 12 comments: 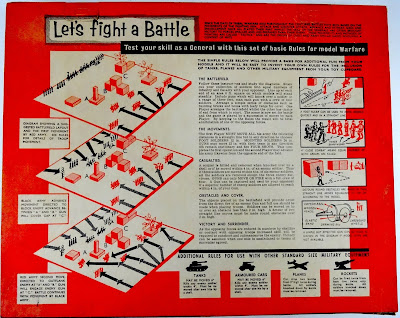 I came across this interesting set of Old School rules on James Opie's Facebook page (4) James Opie Wargaming | Facebook it was issued by Britains on the back of some of their larger boxed sets in 1962 . It has a lot of similarities with H.G. Well's 'Little Wars' with the additional suggestions for tanks etc . I must admit I had no idea that Britains had tried to promote using their figures for wargaming - if you click on the photo it will enlarge  .
Posted by The Good Soldier Svjek at 02:26 18 comments:

Email ThisBlogThis!Share to TwitterShare to FacebookShare to Pinterest
Labels: 54mm Madness, Others 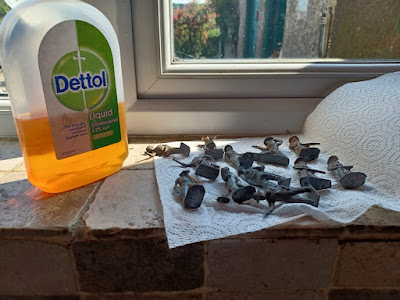 At the moment lots of my fellow bloggers are busy stripping the paint off and renovating old figures and having purchased a few from eBay I've got around to cleaning some up . I've used bleach in the past and Dettol - last time I used some 'own brand' supermarket stuff that didn't work at all - far to weak and diluted , so this time I'm back to the real stuff ! . 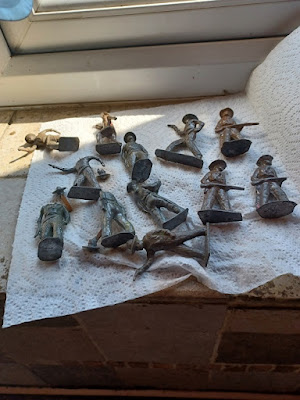 Some of the finished figures smelling very clinical , three of the figures have heads that have been repaired with matchsticks and came away in the cleaning process , so they will need repairing before undercoating . I hate to think of the lead/chemical content of the old paint on these figures, pretty toxic I would say looking at my glove and gunged up tooth brush . It was at this point in the cleaning process whilst using bleach as a stripper I managed to splash it allover a good tee shirt and inadvertently 'tie dyed' it - hence reverting to Dettol - and yes I did clean the sink up ! .
Posted by The Good Soldier Svjek at 03:00 2 comments: 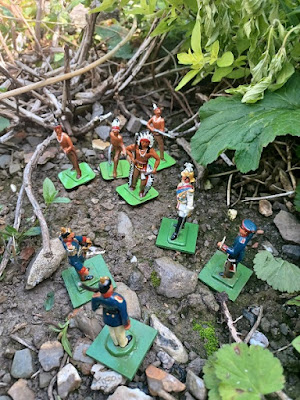 Deep in the undergrowth bordering the Patio a secret meeting is taking part between the 'Blue Army' High Command and Chief Escargot Killer great War chief of the Patio-gonian Indians ........ 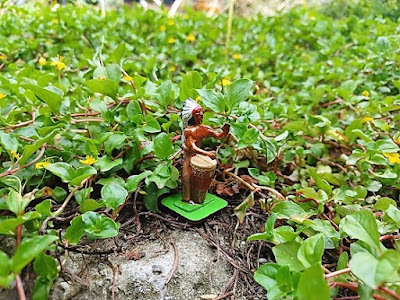 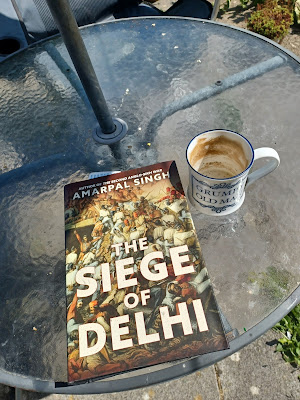 I think the current weather is having a subliminal effect on my reading , I'm half way through a book on the 'Battle of the Bulge' 1944 which of course is set in winter and I just couldn't get on with it - all that talk of snow and ice etc . - then along comes the above book which I pre-ordered and has arrived early (evidently he's written two cracking books on the 1st and 2nd Sikh wars) and so I'm now immersed in the sweltering heat of India just outside Delhi ! - much better ! .
PS must clean my mug out !!
Posted by The Good Soldier Svjek at 04:25 8 comments: 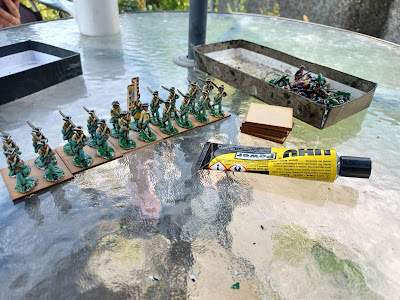 Getting a bit bored with all this hot weather , I don't find it conducive to painting so I've been doing some re-basing . One of the advantages of my clear out of my wargaming room is  now I can access figures a lot easier and in the past I have been sorting out my Spencer Smith figures and basing them for 'Black Powder' - so I've got a few more done - It's an ongoing process . 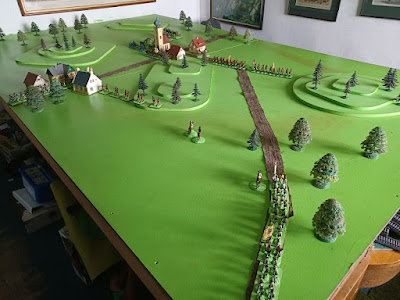 Whilst I was on with my 30mm SYW I decided to set up and play a game using 'Black Powder' rules .
Posted by The Good Soldier Svjek at 01:07 16 comments: 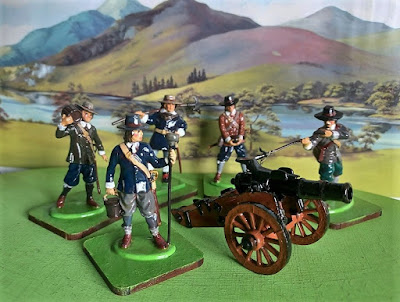 Been plugging away at my plastic ECW 54mm figures and got this gun and crew done . The gun is a metal pencil sharpener with the sharpener removed , painted and varnished . Am finding this hot weather not very conducive to painting so my productivity has dropped - roll on the wet weather ! .
Posted by The Good Soldier Svjek at 04:19 16 comments: 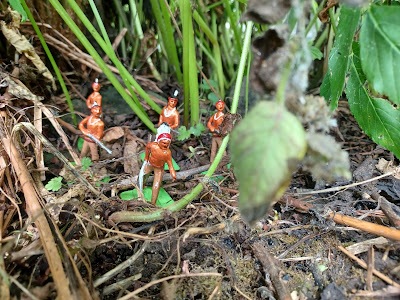 Well I've got the hollow-cast Red Indian figures re-painted and varnished and with the absence of the dog and a spell of fine weather I thought an outdoor photo shoot was just the ticket . 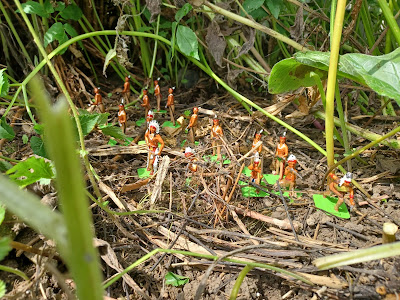 Here we see them cautiously emerging from the dense forest that boarders the Great Patio . 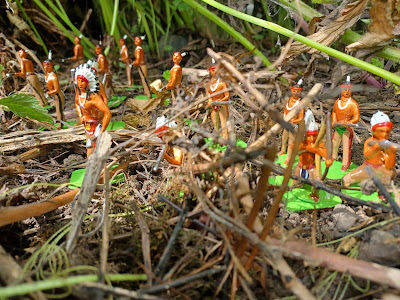 Lead by their great Warchief Escargot Killer they are armed with obsolete rifles supplied by the 'Red Army' with whom they  have a fragile alliance  . 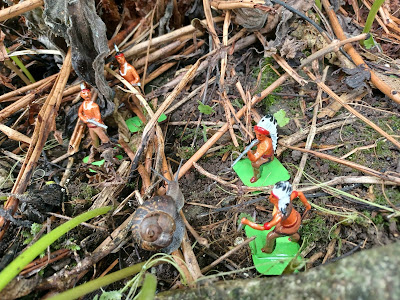 Suddenly they spot one of their main food sources , a giant snail ! - this is swiftly dispatched and they melt back into the thick terrain carrying it away with them . Click on photos to enlarge them .
Posted by The Good Soldier Svjek at 06:38 12 comments: 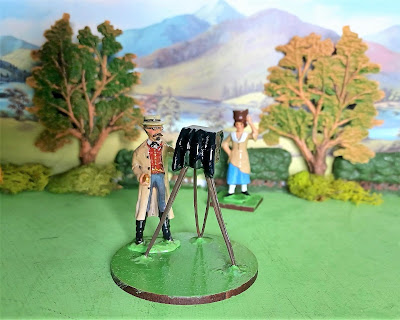 Been painting up mainly 54mm Red Indians this week but in between I finished of this figure and camera , I'm not sure of the manufacturer but it portrays the American Mathew Brady famous for his ACW photography (I would argue Alexander Gardener was more relevant and a better one - but don't get me going off on that hobby-horse !) 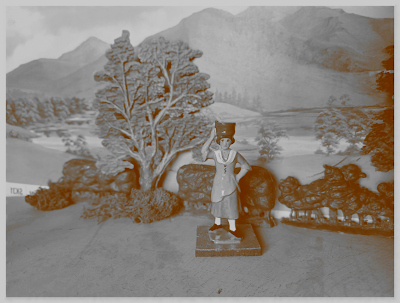 Whilst doing my research about the English Civil War in Borsetshire I visited the University of Felpersham and was lucky enough to be able to view some of the almost unknown collection of Brady's photos of rural Borsetshire life , although doing the maths I believe they are the work of his son Mathew Brady Jr . as they portray life many years after the 1860's . 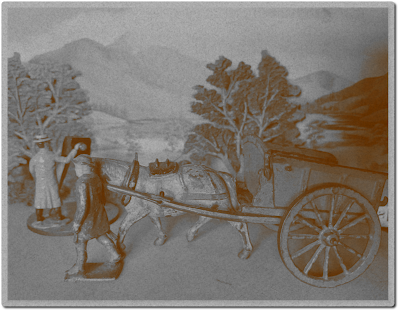 A photo of the photographer at work somewhere in Borsetshire , unfortunately Brady Jr got into trouble with the police as he started producing a series of ,shall we say 'risque' portraits of young ladies in states of dishabille in rural settings which he claimed ti be 'Art' - the Borchester Courts thought different and he left for Paris where he claimed his genre would be appreciated . I was also lucky enough to see his series of photos of 'The Great Patio War' which I believe have generally not been seen before .
P.S there is an argument that some of the photos in the Almark book 'With the Guns to The Patio' should be credited to Brady Jr . - but there's another can of worms !
Posted by The Good Soldier Svjek at 09:12 6 comments: 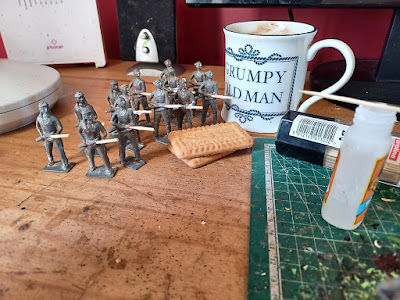 Like an number of my fellow bloggers I'm busy renovating old hollow cast 54mm figures , these are some Britains (?) Red Indians . When I stripped the rather grungy paint job I found that they have had their rifles repaired using matchsticks , unfortunately several came off in the cleaning process and I've been busy whittling matchsticks and gluing them onto the figures . Here's the first batch taking cover behind the Malted Milk biscuits . 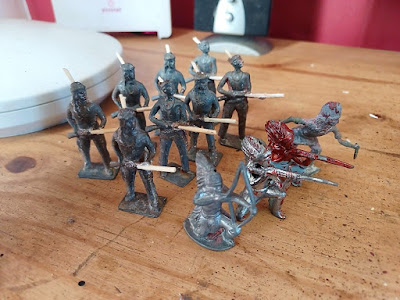 I've also started adding feathers to the standing warriors , in front some Indians from a different purchase , one of which refused to shed it's paint ! . Next to glue them to bases and give them a undercoat . I will report back on progress ......
Posted by The Good Soldier Svjek at 11:55 12 comments: 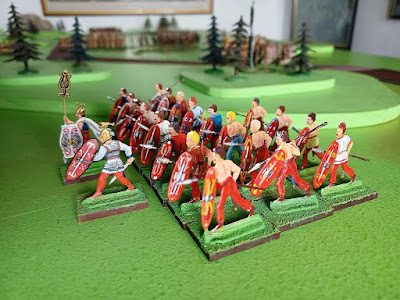 About six months ago I started painting this unit of Cimmerian Warriors for my Hyborian collection and they have sat in the cupboard waiting patiently to get finished . However this week I felt like painting something different so I got them out and they are now completed . They came with a 'factory paint job' and I have added shading and highlights, spruced them up and painted various shield designs and given them a coat off gloss varnish to protect them . Now to get them in action on the tabletop .
Posted by The Good Soldier Svjek at 06:34 18 comments: