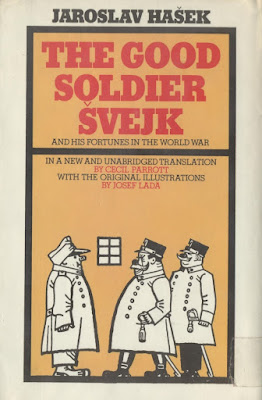 I'm re-reading Hasek's 'The Good Soldier Svejk' , I first encountered it when doing a Literature exam at school , the  rather strange method used by 'Longlands Boy Secondary School' was that you read a set book ( think it was a Thomas Hardy ?) and then had to choose another book to read from the pile of books on the teachers desk , the only problem was - there was only one copy of each and as pupils were called out to make their selection alphabetically - there was not much choice when it was my turn ( this alphabetical method of selection used on many occasions by the school - on reflection probably blighted my academic life !) . I can't remember the other choices that were left but the bright yellow cover and the Lada drawing attracted my attention , also it was a paperback and our English teacher had an old fashioned distaste of paperbacks (this was a long time ago) , so I felt I was being revolutionary as well ! (already Hasek was casting his spell ?). As a choice of book for a exam it's very questionable ? but it was a long time ago and they did things different then ! .I can't for the life in me remember the results of the exam - I doubt it had any lasting effect on my future - but I read the book and I have been a life long fan of 'The Good Soldier' and this battles with authority and have tried to employ his principles from then on .It also gave me a lasting interest in the Austro-Hungarian army of the early 20th century. It's a long rambling book and of course was never finished - Hasek drank himself to death (and was drunk half the time he wrote the book !) . I've just found an old copy of it when clearing out some books for a charity shop and have decided to tackle it again , it will be interesting to see how I get on ! . 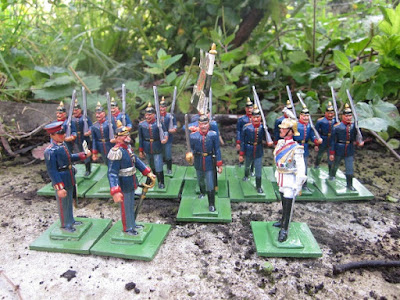 Been waiting for a fine morning to photograph my latest additions to my 54mm 'Black' Army. I've cast up and painted a new standard bearer and a couple of extra rank and file to bring them up to strength. Here they are inspected by Prinz Hertz Van Hyre and the C in C 'Black' Army . 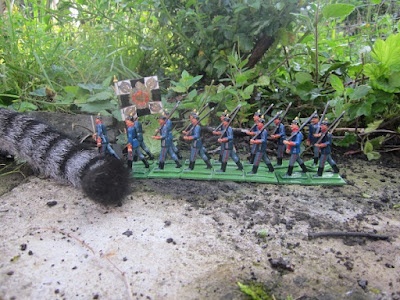 They march off only to have their route blocked by a cats tail ! (Hugo !). 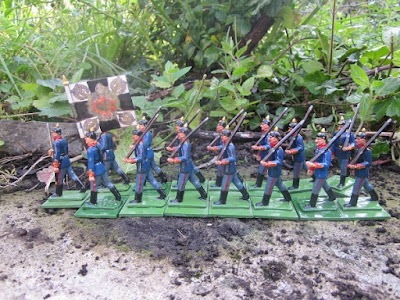 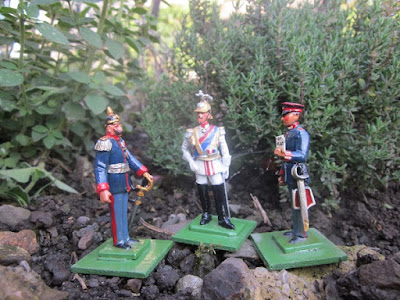 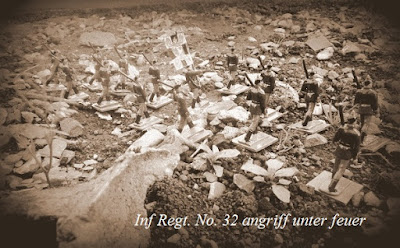 Whilst the evidence for the carrying of Regimental Colours in 'The Great Patio War' by the 'Red' Army is mired in controversy* ! , there is harder evidence for the 'Black' Army carrying them in the field (Patio). The above and following photos are from the 'Die große deutsche Heer Archiv' and are I think published for the first time here . They seem to show the 32nd Infantry Regiment advancing under fire !? . 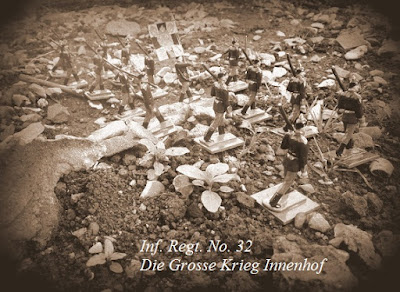 The Regiment is advancing in skirmish order which would make sense with their colours in the centre , if they are really under fire or not this is harder to establish , it could be only a training exercise . The camera technology at this time had improved and the use of the 'Box Browning' camera was fairly widespread at this time , which would allow 'action' shots ? 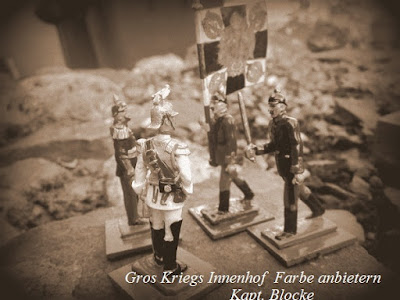 However we might have the identity of the photographer - this photo shows some General Officers with the Regimental Colour (of I think) Inf.Regt.32  and is signed Captain Blocke who was the Aide to General Mouters and would be well placed to take photos of the war . Unfortunately the 'Die große deutsche Heer Archiv, is not available on the Internet at the moment and any more research will have to be done in person . I would like to thank my wargaming colleague 'A' who helped me with the translation from German. 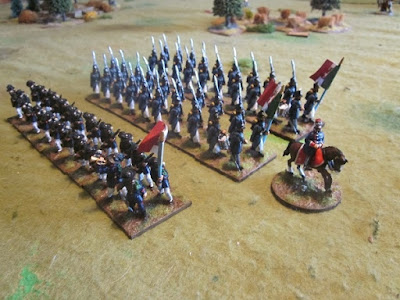 Well it's taken ages - been seduced by other shiny things - but I've got the first part of my 1860 Piedmontese army done !. 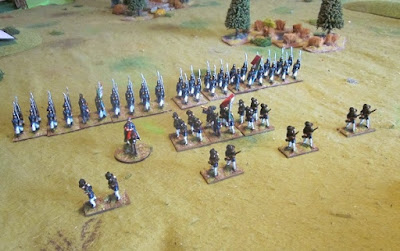 The Brigade comprises of the 1st and 2nd Battalions of the 9th Infantry Regiment and the 11th Battalion of Bersaglieri . Here seen deployed ready for action . 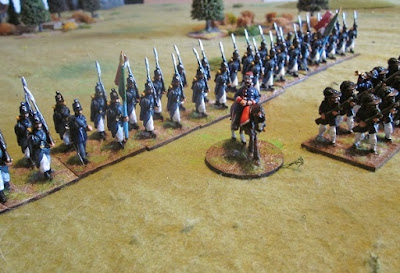 A close up of the Brigadier , I have one or two other things to polish off then I will be putting another  order in to Irregular for the next Brigade . It may be a couple of Lancer Squadrons and a gun and crew as the Line Infantry are a bit boring to paint - grey greatcoats and white trousers, the regimental distinctions are to small to paint on the figures (at least for me they are!) and the one thing that distinguishes them is the number painted onto the shako . 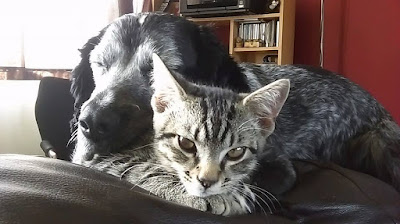 And finally a gratuitous 'Ah ' photo of Charlie and Hugo , who as you can see are getting along very well . 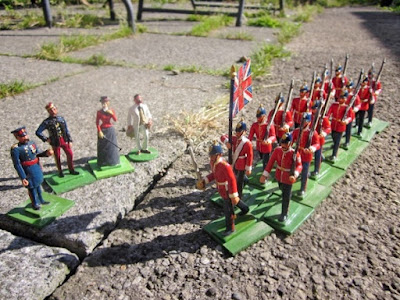 This morning the sun is shinning - a non-too frequent event of late and I thought - 'this is toy soldier weather' ! . So with the absence of the dog (on a walk with my wife) I set up some 54mm Prince August figures on the patio , Ah ! the glint of sunlight on high gloss varnish ! , nothing better ! 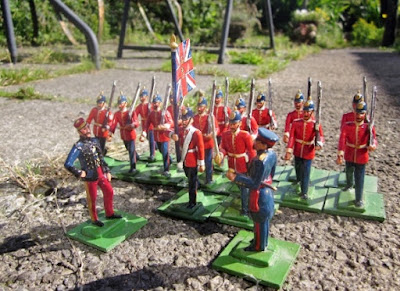 The Borsetshire Regiment troop their Colour and are inspected by the CinC Red Army and Captain D' Anger . 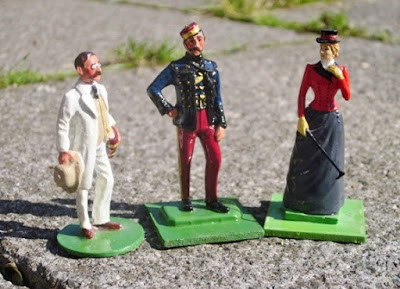 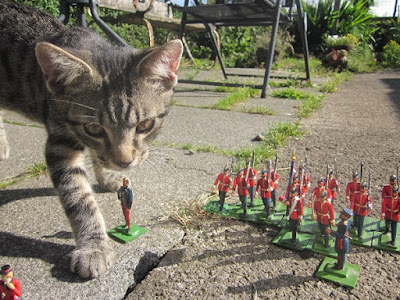 The dangers of Toy Soldiers outdoors ! CAT ATTACK !!!. Hugo is intrigued  and tries to carry off Miss Penelope Welch ! . Hugo is banned from the wargaming room because of his bad behaviour !. 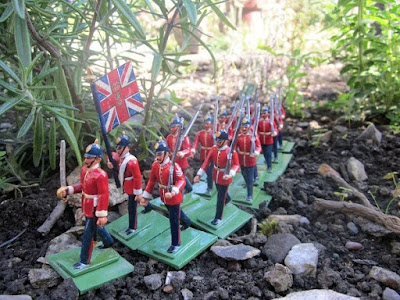 The Borsetshires set off on a route march through the herbs. The Great Patio War was the last time that 'Army Red' had Regimental Colours in action - although many authorities dispute this* ! (I hope to add flags to the other units and also 'Army Black' when I get around to it ). 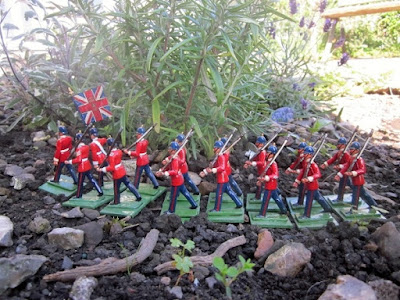 A Gaming Evening At 'A's 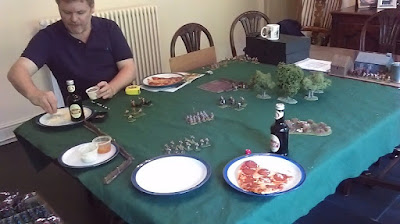 I went around to 'A's the other night for a evening of gaming , several games were played and much junk food eaten ! - as witnessed by the above photo . Please note -  not bottles of beer but old fashioned Ginger Beer ! (lashings of ) , sadly I forgot to take my camera and my phone camera was less than adequate . I managed to loose a 'Lion Rampant game ( an Ancient Britons versus Romans variant 'A' is working on) and then proceeded to loose the Battle of Balaclava using 'Black Powder' . But a 'good time was had by all !'. 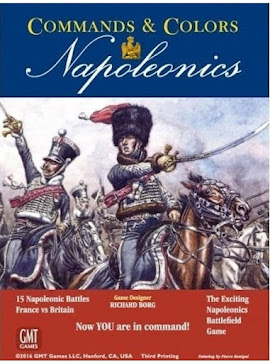 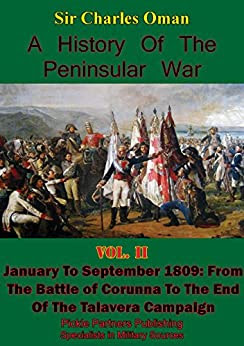