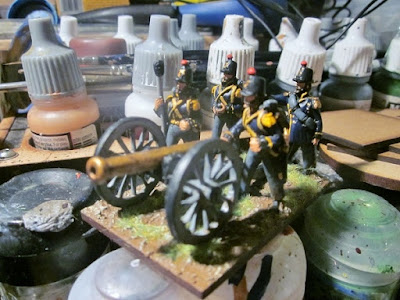 Unfortunately 'real life' and family visitors have prevented much painting and hobby based activities of late so the only thing I've got done is this Piedmontese artillery piece and crew . 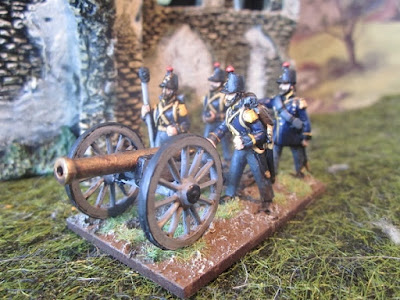 Here's a slightly better photo . The uniform info I have says 'yellow' leather belts - I'm assuming this means a 'buff' colour and as this is the third army (the others being - Neapolitans and Papal) I have use these figures for I'm pleased with the different uniform colours of the Piedmontese . Hopefully when things return to normal next week I'll get the remainder of the cavalry done and some Generals so I can set up a small game to take on the Papal forces in 1860 Italy .

We've Been On Holiday . 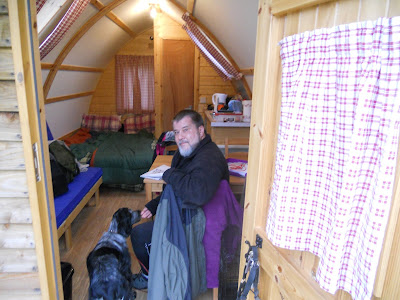 No ! not a Hobbit Hole - our camping 'pod' , we've been away for a week or so on holiday near Whitby in North Yorkshire staying in the above 'pod' on a rather nice camp site . 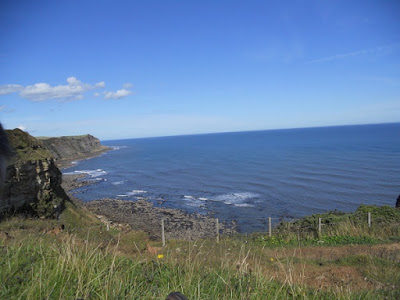 The weather forecast was poor - but luckily they got it wrong and we only had one wet day . 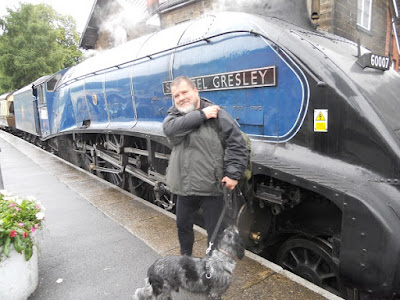 Charlie meets 'Sir Nigel Gresley' - and was not impressed - more interested in the packed lunches a group of women passengers were eating. 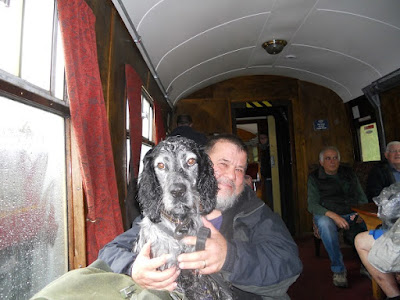 The steam train journey didn't bother him at all !. 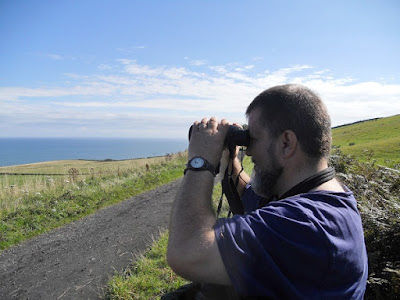 I scan the horizon for ships and wonder why I've never got to grips with naval wargaming !?. 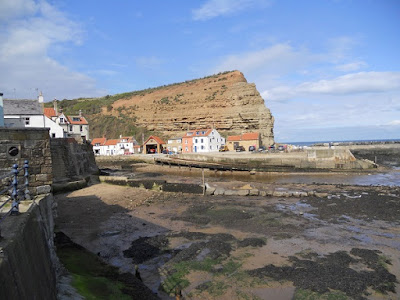 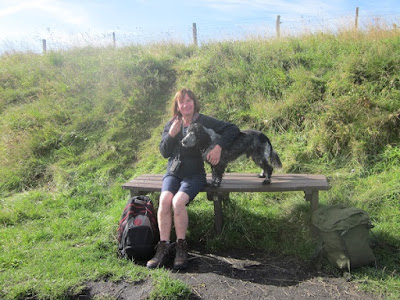 Mrs 'K' (with very pale legs - says a lot about our summer!) and Charlie. 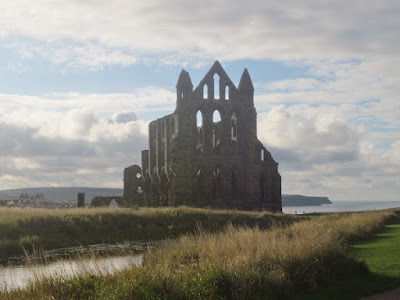 Whitby Abbey - always impressive ! . No wargaming content this holiday although the Abbey got me thinking medieval 'Lion Rampant' . The break has done me good and I've returned to the painting/wargaming table with fresh enthusiasm . 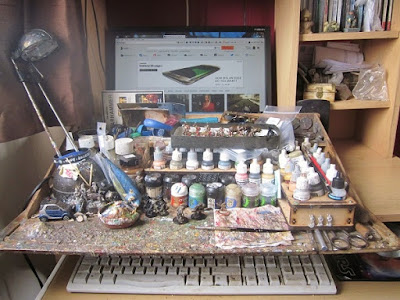 For years I've been using my painting tray sat on a fold down table next to my armchair to paint figures on , in poor light I have a lamp sat on it and it has served me well. The other day my wife was using MY table to do some 'girly' crafty things on !? , sooooo instead of sulking I thought "will it fit in front of the computer ?" and it did ! - why didn't I think of this before !? - its right next to a window - very well lit and now I can watch pod casts etc whilst painting !  - Huzzah !!!! . 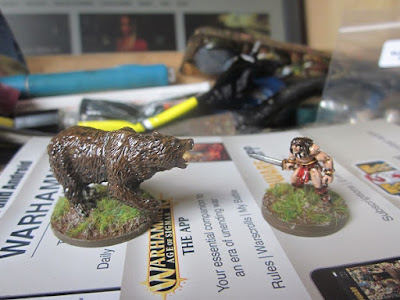 Getting on well with 15mm Fantasy figures , here Conan is confronted by a giant bear !. 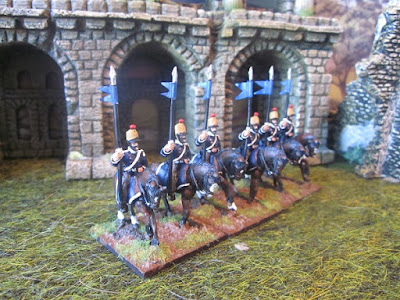 My next order from Irregular arrive at the weekend comprising of 2 squadrons of Lancers and a gun, crew and limber/team . Spurred on I painted up the first of the Lancer units . 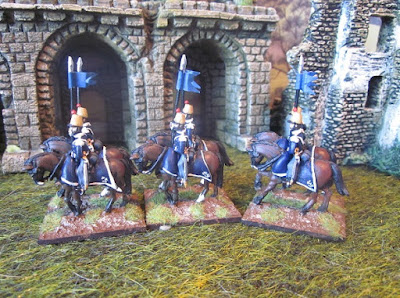 They are the Lancieri Di Novara , I've decided to go a bit more cavalry heavy with the Piedmontese force and as I haven't got any lancers in my Unification of Italy project they were an obvious choice . Just to make things a bit more interesting they had their shako covered with a 'yellow' waterproof cover . Irregular figures are not the most detailed but they do paint up quickly and at 'wargaming table distance' (about 3' ish) they look as good as any other manufacturer . 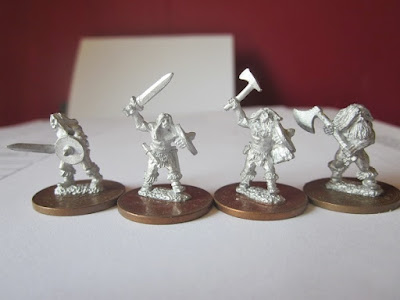 My wargaming colleague 'A' said - " are we going down to the Reading show this November ?" , we did this show last year and combined it with wargaming in our hotel room and lots of bad for you food ! (http://tonystoysoldiers.blogspot.co.uk/2014/11/warfare-reading-2014.html ). One of the challenges was playing on a 2' X 4' table ( the maximum size we could use in the room ) so we were limited to which games could be taken to play . We thought this year we would take different games down to use and 'A' has a 'secret project X ' he is working on - so I wondered what I should take new this year ?. I'm a big fan of 'Lion Rampant' medieval skirmish rules - but this takes up to much room - however there are going to be a fantasy variant of them next year and I was thinking of painting up some figures for it  . I'd come across the 15 mm Copplestone Casting Fantasy range and really liked the figures and was going to use them for it , so I thought if I bought a few of them I could use them with the excellent 'Songs of Blades and Heroes' rules which came be used on a 2' X 2' board . The figures have arrive very quickly and are for 15mm very detailed ! . 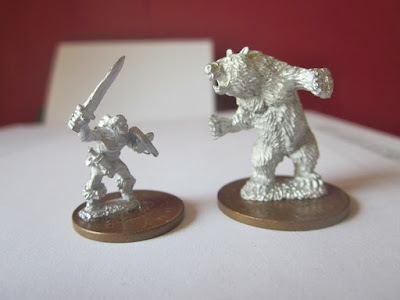 The problem is 'A's prejudice to fantasy - it hasn't to be to 'far out' ! - I think he used the term 'histrofantasy' ie fantasy based on historic facts/periods , so I preposed a sort of Dark Age - Conan the Barbarian setting so I can sneak in the odd Troll - Witch etc ( and  giant bear see above) . The figures are rather nice and I'm looking forward to painting them - will only need a couple of dozen or so at present and they will make a change from all those 28mm Napoleonic figures. 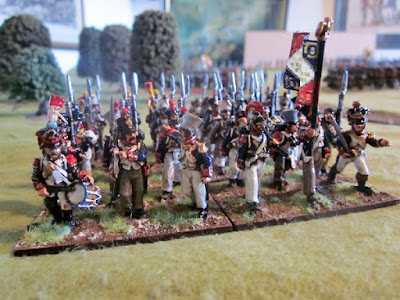 I was looking at a post I wrote about 12 months ago stating what I hoped to achieve in the coming year . One of the statements was that  I was going to get some more of my Napoleonic figures painted up. Hmm ! haven't touched them yet !. 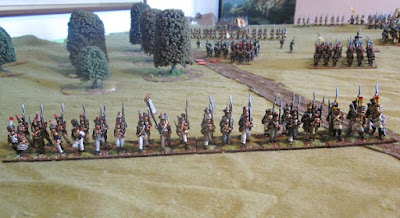 This French Infantry battalion was already blacked up ready to paint so overcome with guilt I decided it would be a very worthy thing to get them painted . Was not looking forward to it to tell the truth, 36 figures and French infantry is a bit of a task ! , but I 'buckled down' and got on with it ! . 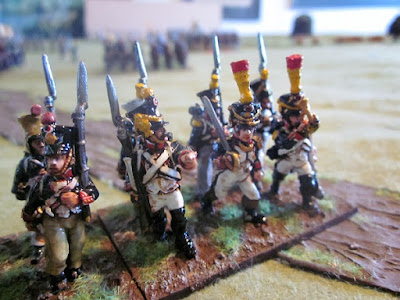 It was not as bad as I thought it would be , the figures were a hotch-potch of full dress and campaign dress so there was a pleasant mix of poses and figures and I managed to get them done in a week !. 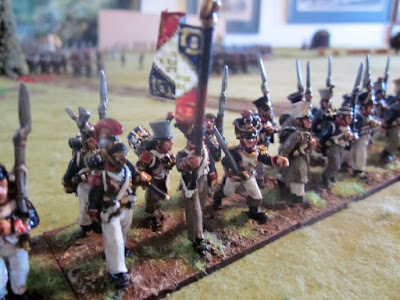 They are the 18th Regiment of Ligne and are the last of the French infantry figures I had left unpainted 'phew' ! . I still however have about 4 unpainted Austrian battalion to do ! . 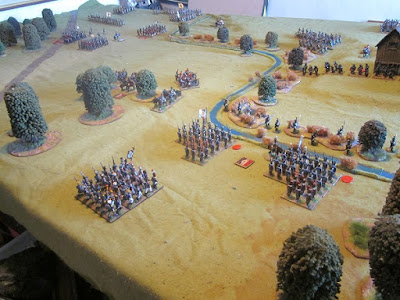 Seeing I've got them varnished and based up I have rushed them onto the table as reinforcements in a game I'm playing at the moment (centre of the table near the table edge) . Rather pleased with myself getting these done as I was dreading doing them , I wonder if the 'curse of the newly painted ' will dog them in the game ?.