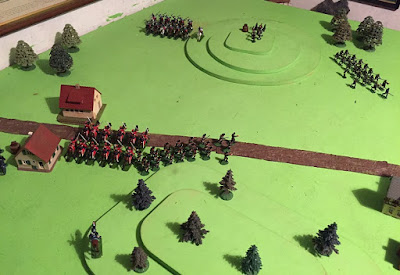 The other day 'A' rang me say was I free for a game that afternoon , well I had nothing set up or planned so I reset some existing terrain and got out my O.S. FPW  figures and set up a small game which would last eight moves . Then my camera battery died and so I am indebted to 'A' for taking the photos with his phones camera . He was the Prussians (nearest the camera) and I the French . 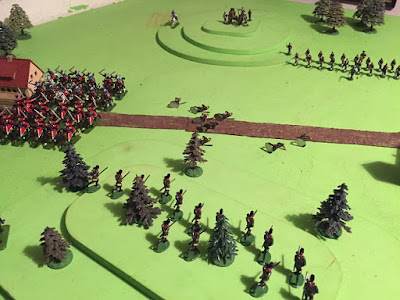 The scenario was to control a railway crossing in the centre of the table , but both initial forces arrive opposite each other on one flank . The cavalry were involved in a protracted melee and his advancing Jaegers were driven back by my Chasseurs De Pied and my artillery placed on the hill . 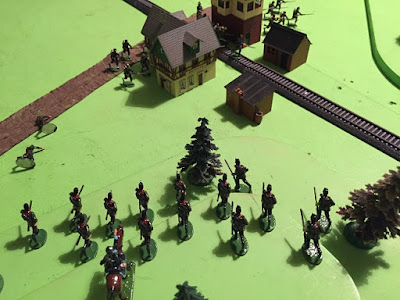 Having driven the Jeagers off, the Chasseurs De Pied took control of the objective , whilst the Jeagers rallied and took up a position to fire on the enemy. 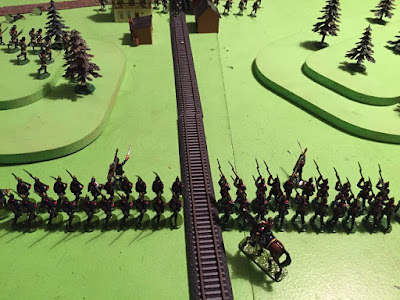 'A's reinforcements arrived and advanced on the objective of the game . 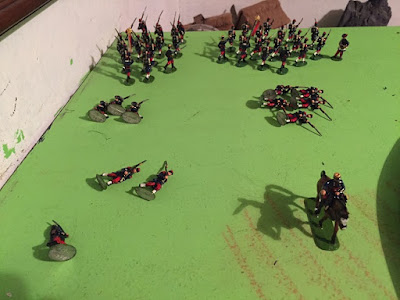 Meanwhile my reinforcement came on and immediately came under fire from 'A's artillery , one unit took casualties and retired from the table the other one tested it's morale but rallied before it left the table . 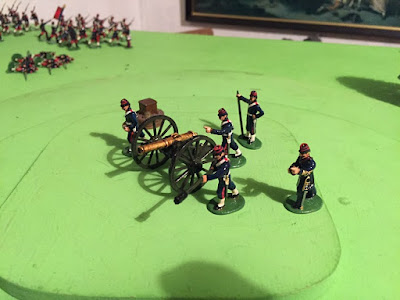 My gun revenged my fleeing infantry by knocking out the Prussian gun and crew - in fact they were the French 'Man of the Match' hardly missing a shot (for once in their career). 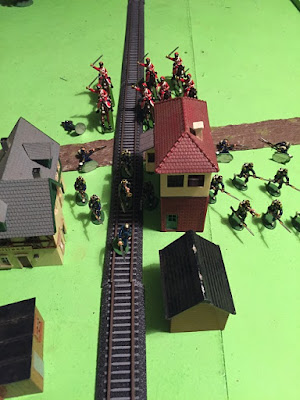 The Prussian cavalry destroyed their French opponents and wheel around and charged the Chasseurs De Pied in the rear ! . 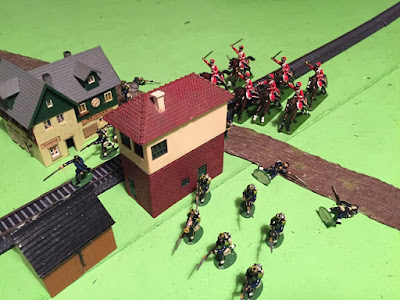 This was the last move and under Featherstone's rules troops charged in the rear have to throw a dice to see how they respond to the attack - I rolled a '1' - and they were 'cut down' - so 'A' won the battle on the last move  . A good game at rather short notice ! . 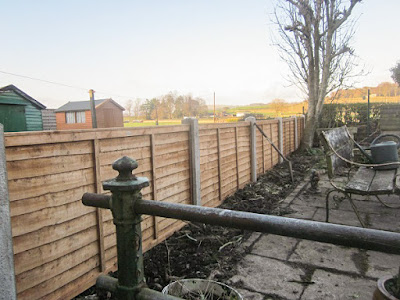 Our new fence , rather ordinary really but it replaced a poor and straggly hedge and took quite a bit of work in removing the old hedge and it's roots . The soil needs levelling and tidying but the wet weather has made it rather sticky so it will have to wait till it dries out . Whilst the fence building was going on I found buried - 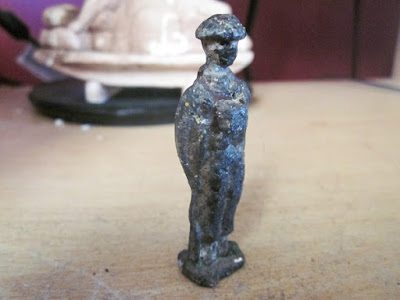 A little lead soldier !  here he is cleaned up , he seems to be in WW2 British Battledress and standing at attention . There are traces of paint on him and is rather a crude casting . 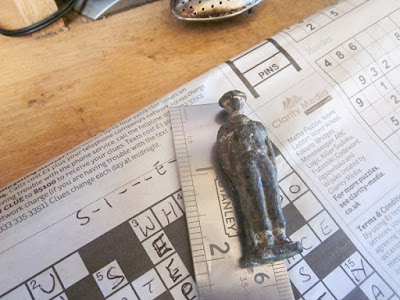 He is about 54mm (2") scale , I'm not sure where he has come from , my parents moved into the house in about 1946 shortly after it was built and I have lived here all my life and can't remember ever owning him as a child so he is a bit of a mystery , but he will stand guard on my painting tray from now on . 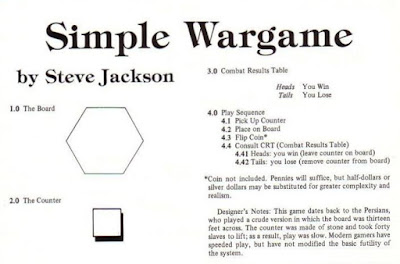 At the moment myself and the neighbour are replacing our adjoining hedge with a wood panelled fence and it has taken on the proportions of building the Great Wall of China , so I've not got much painting done of late , instead here's a simple games mechanism gleamed from the inter web . Normal service to be resumed as soon as possible

If You Go Down To The Woods Today. 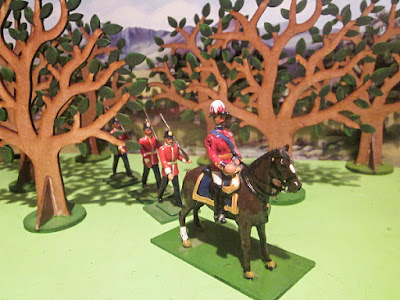 Well I've finally got my trees finished , the delay being due to real life and other painting projects . Here we see General Smyth and a small patrol from the Boresetshires reconnoitring the new woods. 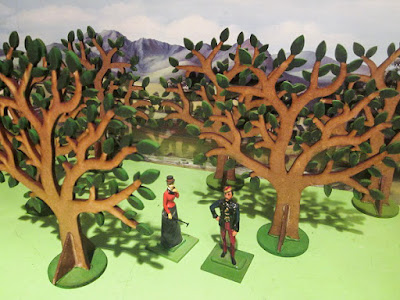 I gave the trees a coat of gloss varnish then painted the leaves dark green , I then highlighted the edges of the leaves with a lighter shade and painted the bases . 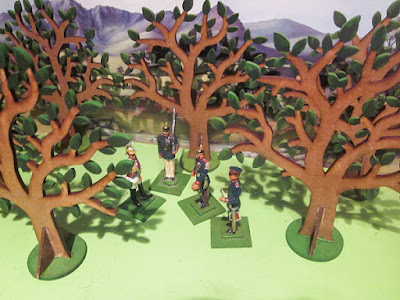 Here we see the General Staff of 'Black' Army using the woods to plan some dastardly action against 'Red' Army. 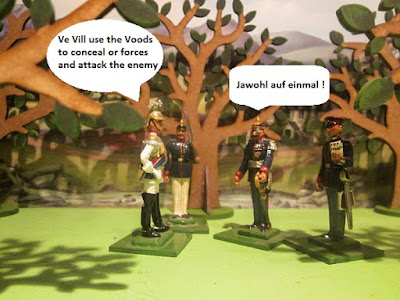 Hopefully the woods will be appearing in a battle between the two forces in the near future. 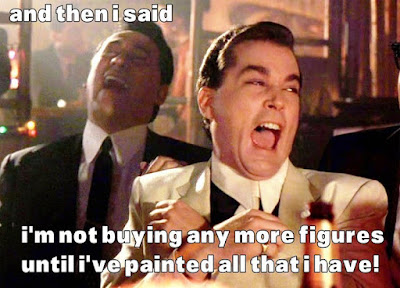 Found on the Inter web (we've all said it !)

Seeing The Trees For The Woods 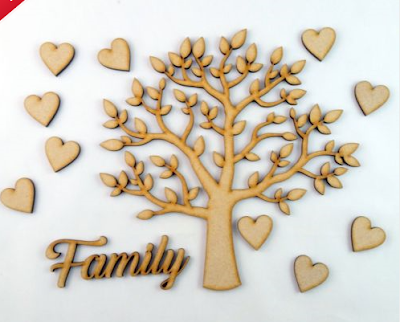 I blame Ross from http://gameofmonth.blogspot.co.uk/ he was talking about gaming using 54mm figures , now I have some home-cast 54mm figures but have never really played with them due to the lack of suitable terrain - I have dabbled with out door gaming but due to the weather and the dog never that successfully - I was looking in a Family History magazine , my wife does genealogy and came across the above MDF tree for making family trees (think you attach the heart shapes with the relatives names on them) and thought would it do for 54mm gaming ?!. 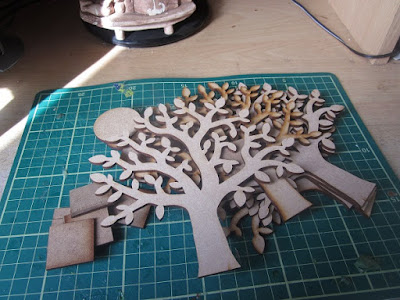 I sent for some (they come in various sizes ) and got a parcel with six of them . Now they are two dimensional  but I was thinking stylised terrain - VERY Toy Soldier so I had to think of some method of basing them . 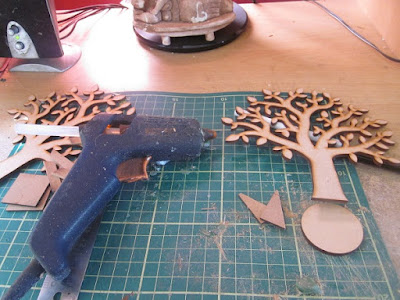 I decided to hot glue them to some round bases I already had and support them with two triangular uprights . 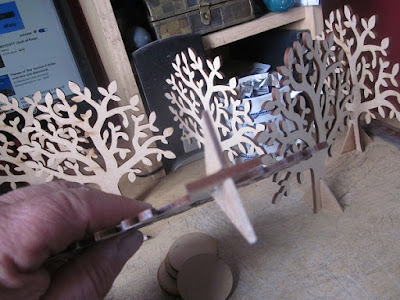 These I glued at right angles to the tree trunk and then the whole thing to the base . 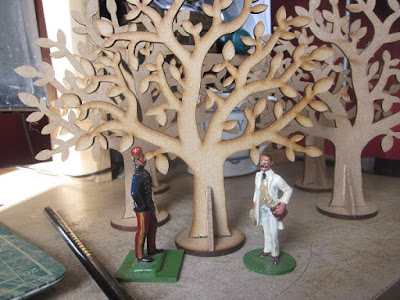 Here we see Colonel Flashman and Mr Kipling (in 54mm) inspecting the finished trees to give some scale . I'm going to give them a coat of gloss varnish and then paint the leaves and bases green - an update to follow soon ............
P.S Have been asked were I got them from EBay -  http://stores.ebay.co.uk/MDF-Craft-Supplies?_trksid=p2047675.l2563

A Poem About Wargaming .

This poem by Elvis McGonagal  has been borrowed from the ' Man of Tin Blog '  https://manoftinblog.wordpress.com/

He fights them on the beaches
He fights them on the seas
He fights them on the carpet
(Despite his creaky knees)
He fights them in his attic (and why not?)
He fights them in his head
He fights the Battle of Thermopylae
In his garden shed
With his barmy army of tiny tin men
Painted precise Prussian blue
He is the very model of a modern major general
Who need never meet his Waterloo
Whistling Colonel Bogey
As he manoeuvres his platoons
He knows exactly the number of buttons
On a Hungarian Hussar’s pantaloons
Like Louis XIV in a toy-shop
Consumed by insatiable decadence
“I’d like that Philistines’ ox-drawn chariot please
And ten more Carthaginian elephants”
Hair thinning, waistline spreading
Is this an obsession he should indulge?
Surely the only battle for a middle-aged man
Is the battle of the bulge?
Some say he’s a Little Napoleon
A pocket Agamemnon of Mycenae
An itsy-witsy, teeny-weeny
Bellowing, diddly-squat Mussolini
But fear not do not beware the Geek
For he’s no gun-toting, gung-ho hawk
He’s harmless, he faints at the sight of blood
His warmomgering games are all talk
He’s just a peaceful chap in his bedroom
He’s not Darius the Great of Ancient Thrace
Indeed, if Tony Blair had only stayed at home in Number Ten with a Rowney Sable paintbrush quietly colouring in a dinky wee moustache and the horsehair plumes on his 22mm Bavarian fusiliers then
The world might be a safer place
Posted by The Good Soldier Svjek at 04:56 6 comments: