Taken in for questioning 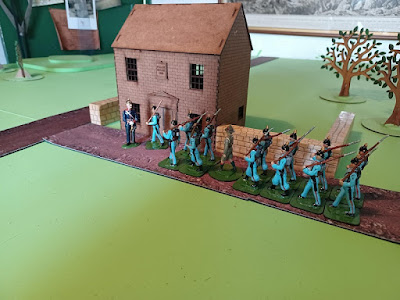 Shiny in their newly painted uniforms the Bavarians march the prisoner to the Police station for questioning . 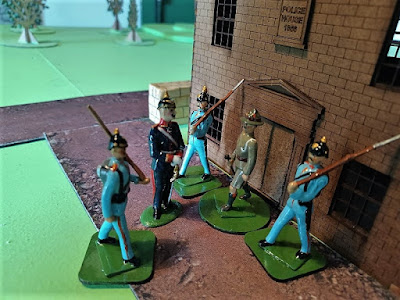 There they are met by the 'Blue Army' Staff Officer Graf Von Rottenburg who wants a word with Baden Powell about the suspicious sketch books found on him - Von Rottenburg is over 6.6" tall (perils of buying from eBay he's a  60mm tall figure) . 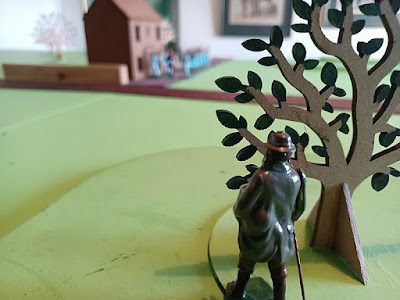 However the proceedings are being observed ! 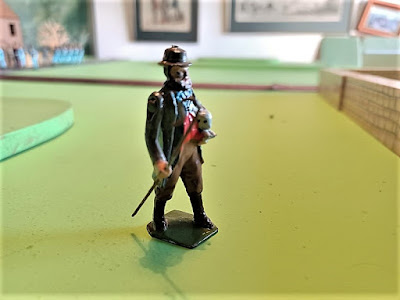 Shepard Gabriel Oaks hurries off to let the relevant people know what's going on !
Posted by The Good Soldier Svjek at 11:14 14 comments: 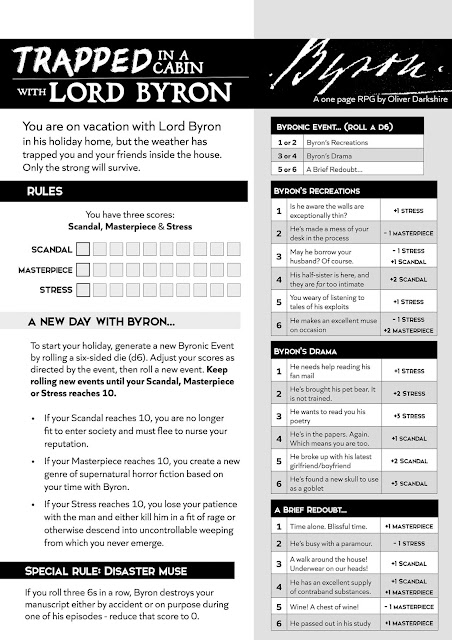 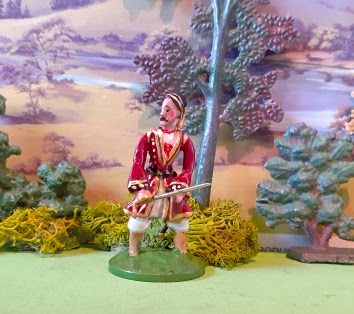 Can you survive a close encounter with Lord Bygon with your sanity still intact ? .: Lord Bygon. (tonystoysoldiers.blogspot.com) 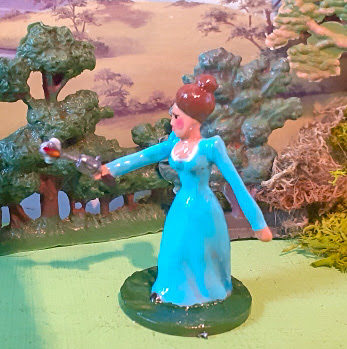 Or will you resort to physically harming him !? .: Mad , Bad and Dangerous . (tonystoysoldiers.blogspot.com)
PS I almost completed my Gothic masterpiece of a novel . whilst keeping my stress levels under control , but succumbed to the scandal due to the excesses of Lord Bygon !
Posted by The Good Soldier Svjek at 06:51 6 comments:

On the way to the paint shop . 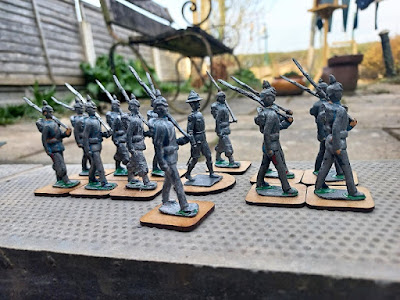 Whilst on their way to receive their new uniforms they came across this chap behaving suspiciously near the 'Great Patio Wall' - he has been taken in for questioning - says his name is Baden Powell !?
Posted by The Good Soldier Svjek at 08:13 16 comments:

A few posts ago I commented on a illustration from a French magazine (.: Soldat Des Plomb (tonystoysoldiers.blogspot.com) Whilst I was googling to find more information I found that there was a copy of the illustration for sale (only £10 - which I thought a bargain) - so I purchased it . 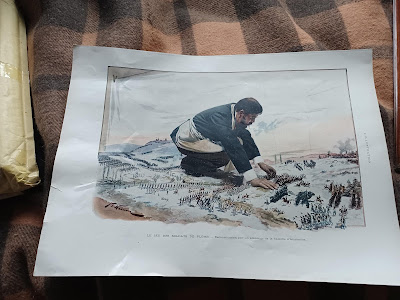 It is a page from L'Illustration a French magazine from about the turn of the 19th century . 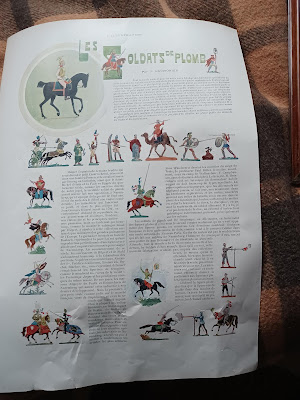 Of equal interest is the reverse side , an article on Les Soldat de Plomb 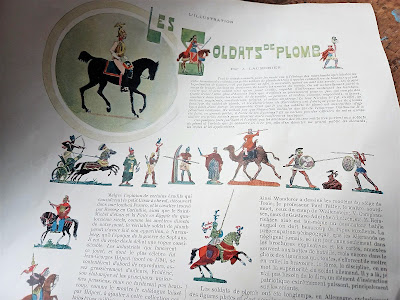 Here are a couple of closer shots , unfortunately my French is of the same level of 'Del Boy' Trotter* so I'm not up to a translation . 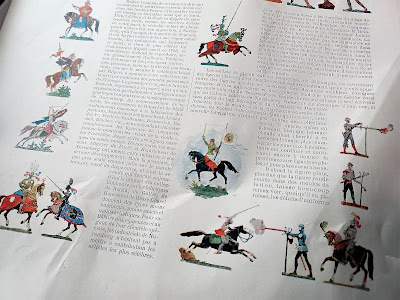 Here's the bottom section - if you click on them they will I hope enlarge . . I'm hoping to get the page into a picture frame  and hung on a wall (when our decorating progresses ).
*BBC TV series 'Only Fools and Horses'

I saw these figures on Ebay and put a tentative bid on them and rather forgot about them as I was not going to get into a 'biding war' over them . Much to my surprise I won them with my low bid of only £12 - nobody else seemed interested evidently , which is a bit odd as you hardly ever see Germanic/Prussian figures for sale .
They are 54mm solid cast figures and I'm afraid rather badly painted - so I'm going to have to strip the paint off them . Interestingly they are 3 different types , one with high boots (left) one marching straight base and one with the base at 45deg . Not sure who is the manufacturer - will have to check up in my books .
Posted by The Good Soldier Svjek at 06:42 16 comments: 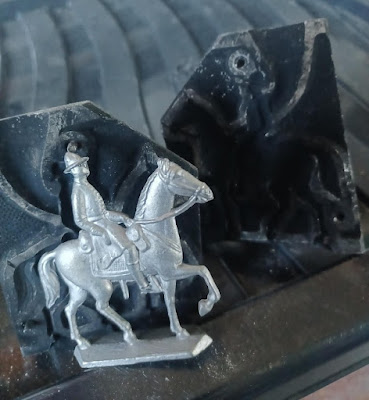 As I mentioned a couple of posts ago I've come into the possession of some old metal molds and castings . I found I had six of the above figure which is a ACW General (?) - not the most useful figure so I decided I would do a conversion and an alternative paint job . 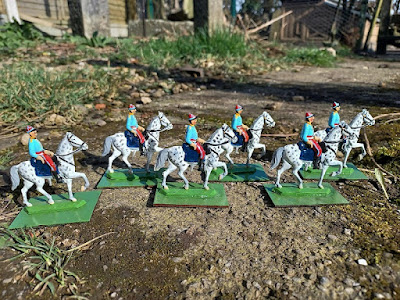 I give you the Chasseurs d' Patio ! , as you know the Army 'Kepi Rouge' was not involved with the 'Great Patio War' in a large way sending only a few units one of which were the famed Chasseurs d' Africa , who in honour of their part in the struggle were given the honorary title  Chasseurs d' Patio ., here we see them on patrol on a rare sunny day . 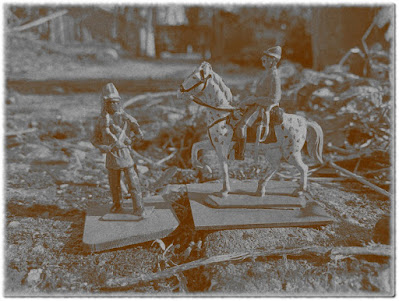 Contemporary photos of 'The Great Patio War' are rare and ones that show the Army 'Kepi Rouge' even rarer . This is one of the few , it shows a Chasseure d' Patio Officer with a Patiogonian Indian Chief , who it is thought to be Tueur d' Escargots by some authorities . This photo is taken from the Almark series book 'The Great Patio War' published in 1970 but sadly long out of print and hard and expensive to find . 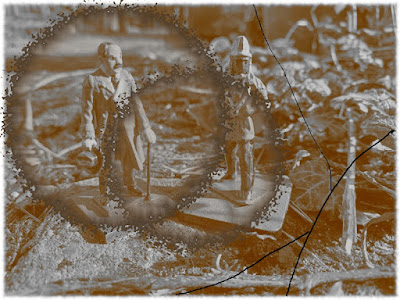 Whilst researching for this blog I came across the above badly damaged photo which seems to show a Patiogonian Indian who looks very like  d' Escargots in the other photo and may have been taken at the same time . More interestingly is the supposed presence of H.G. Wells , it bears a striking resemblance to the great man and he was known to have briefly visited the Patio * ,, however this photo is a source of great controversy amongst scholars of the era .
*Dispatches from the Patio by R. Kipling
Posted by The Good Soldier Svjek at 10:20 8 comments:

Fruits of the loom (well molds) 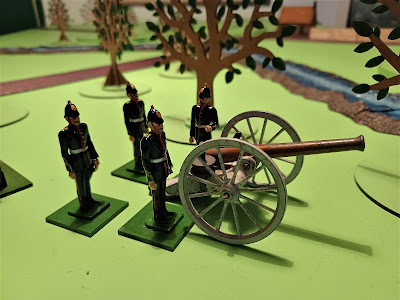 Got these figures I cast up a couple of weeks ago finally finished , so this gives 'Red' Army two gun crews , this means I have to cast some up for Army 'Blue' to even things up . They are of course Prince August 54mm . 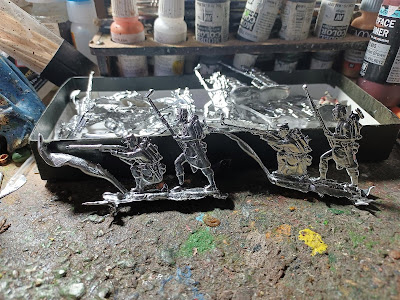 I've also been playing about with the metal mold I got and have managed to get these done . They are 40mm semi-flats and are French Infantry . Found the trick with metal molds is the hotter the mold gets the better the casting , totally different than the rubber molds which start to distort if you don't let them cool down whilst casting . Need to clean these up and based ready for painting .
Posted by The Good Soldier Svjek at 08:48 14 comments: 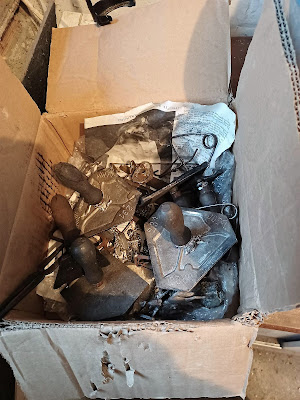 I recently got a box of bits and pieces of casting equipment and  metal molds , a treasure trove ! 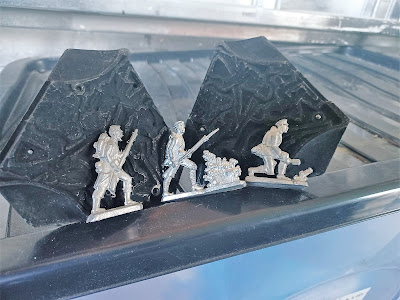 , I've no idea who they are by, the molds are metal with wooden handles , amongst the files clamps etc were a number of castings that had been cast from the molds . They seem to be WW1 ish ,  40mm semi-flats a French infantryman and two Germanic (?) infantry figures - one with a couple of grenades . 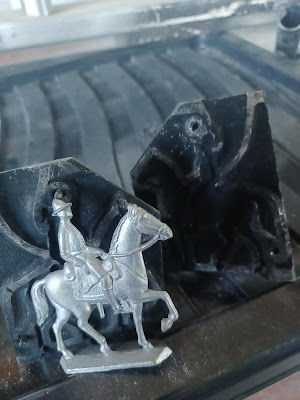 The other one is a mounted ACW General (?) seems about 54mm and semi-flat . There were 6 castings in the box from this mold . 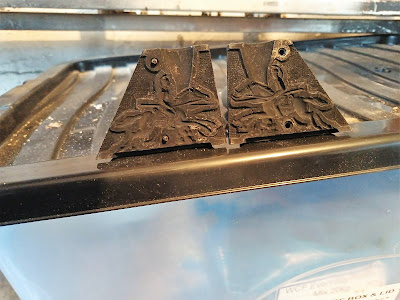 There is also a small curious mold - seems to be about 25mm and seems to be a Lancer (?) . Does anybody know anything about them ? . When I get some more cast they will be appearing on the tabletop in the ranks of my Imagination armies .
Posted by The Good Soldier Svjek at 00:29 10 comments:

Email ThisBlogThis!Share to TwitterShare to FacebookShare to Pinterest
Labels: 40mm Imagination, Others 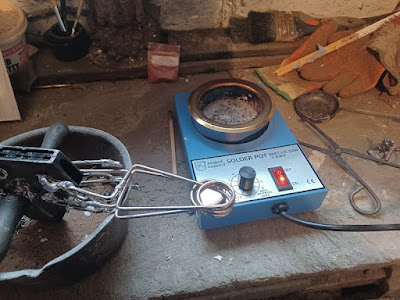 So I've decided to move into the 21st century , it was going to be expensive to replace my gas bottle which fits onto the old camping stove that I have used for melting metal - my wife was not entirely happy with me using the cooker hob in the kitchen (even when told I was being 'super careful' ) . People have in the past pointed out the usefulness of these solder heaters sold by Prince August - so I got this one for about £30 - and it works very well indeed ! - rather pleased with it ! . 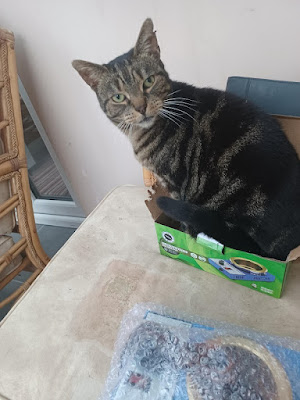 Other members of the household were equally pleased with the packaging - 'if it fits - I sits' ! . 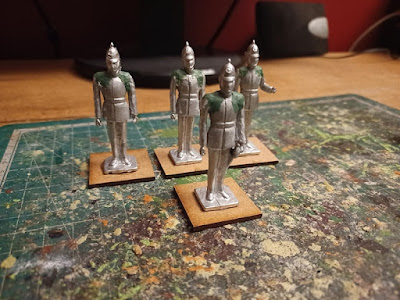