Not a good day for 'The Thousand' . 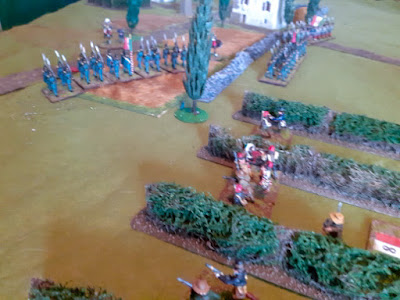 First apologies for not illustrating this battle properly - as things got exciting I forgot to take photos . The Sicilian irregulars tried to get around the enemies right flank but being 'wavering' had to take a morale test when they received their first casualties and promptly fled ! 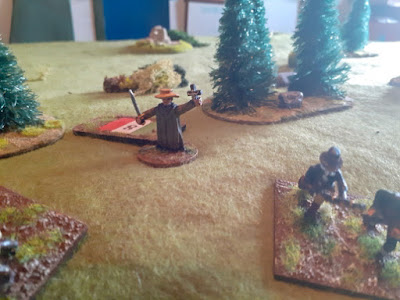 Their commander Friar Pantaleo was unable to rally them ! , he was formerly a Spanish Napoleonic guerilla from  'Parkfield Miniatures' an odd little figure but matches the Irregular figures in stature . 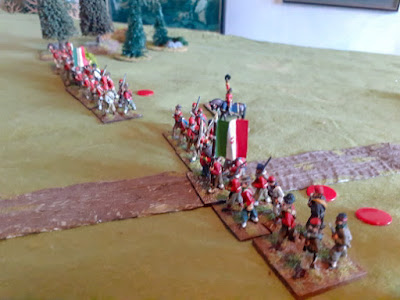 The 'Thousand' advance but are outgunned by the Neapolitan Carbineers and start taking casualties . 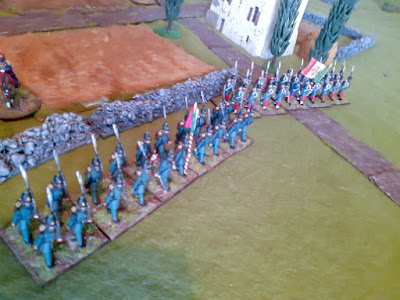 Sensing victory the Neapolitan Line and Foreign Carbineer Regiment advance and drive the rebels from the field ! . Well that didn't end up as I expected - the Neapolitans rolled very well and Garibaldi's very badly , I classed the Neapolitan Foreign Battalions as veterans and the Line as poor and although their Commander was not brilliant the behaviour of the 'piccolotti' was very poor and took the pressure off their right flank allowing then to concentrate their fire onto Garibaldi's volunteers and drive them off .. Inspired by this game I have reset the table and re-jigged the forces and will replay it .

Return of 'The Thousand' . 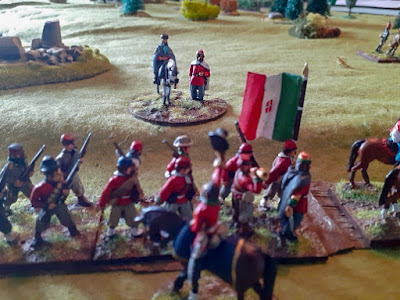 Been looking through some of my old posts and realised it was over twelve months since I had any of my Italian Wars of Independence on the tabletop and thought it was time to get them out again . Here we see Garibaldi reviewing his volunteers as they march to reconquer Sicily . 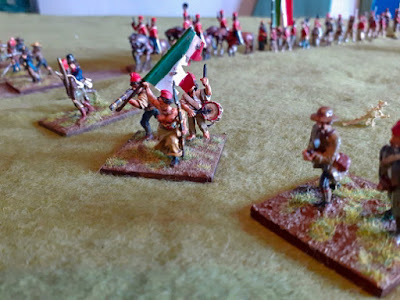 The column is proceeded by a skirmish screen of the local 'piccolotti' , a fine mix of old Hinchliffe and Foundry figures . 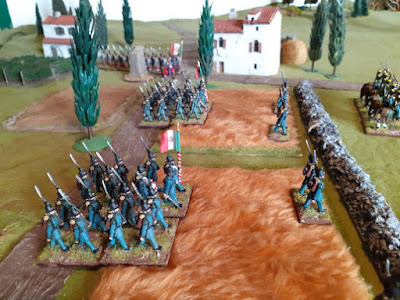 The opposition , a brigade of Neapolitan's , Irregular 28mm figures . 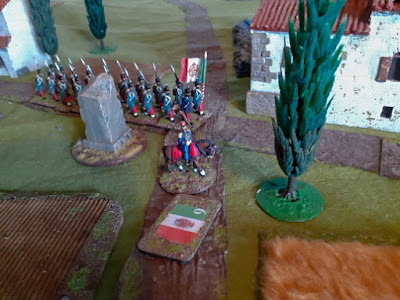 The Neapolitan commander - only a command strength of 6 - not a brilliant tactician . I use 'Black Powder' rules for this period and am having to give them a quick once over to remind myself how they work as it's a while since I used them . 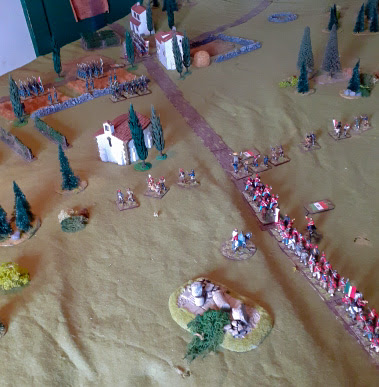 A overall view of the action with Garibaldi's force nearest the camera and the Neapolitans drawn up in the fields around the cross roads . I'll report the result of the battle in my next blog post .

Several months ago I said I would post a copy of my latest version of Donald Featherstones Horse and Musket rules which I use for my O.S. Franco-Prussian games and then forgot to do so ,  so better late than never - it's still a work in progress so things might alter in the future.... 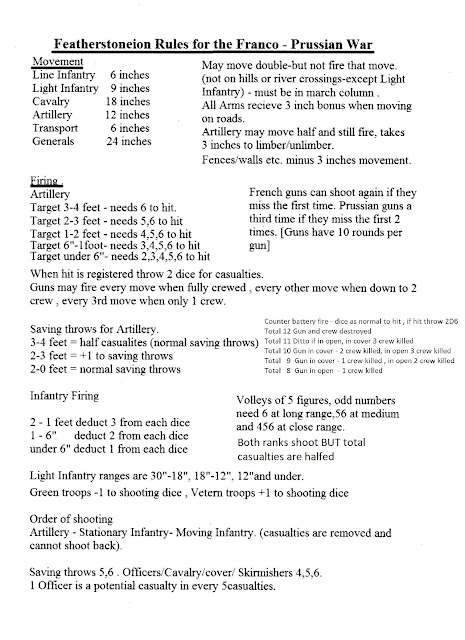 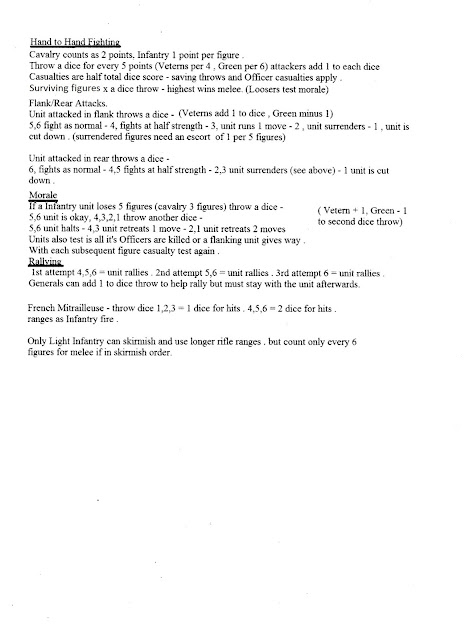 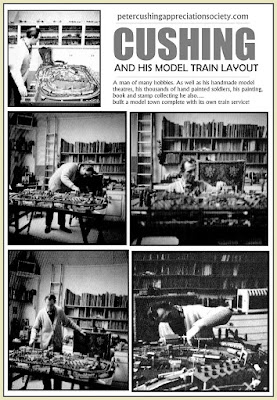 A couple of posts ago I put up some photos of the actor Peter Cushing with his toy soldier collection , I had heard that he also had a model railway fan and have tracked down the above article of his  layout , it's from the 'Peter Cushing Appreciation Society ' , hopefully if you click on it it will enlarge .. 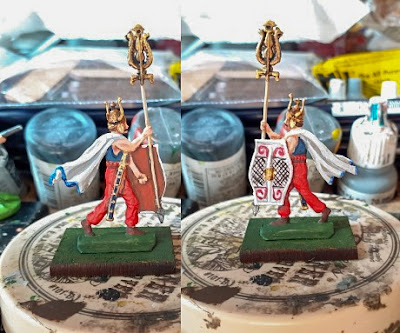 Searching in my 'wargaming draw of shame' for something the other day and at the bottom of the draw I found the above ancient flat figure . A few months ago I purchased some barbarian type figures from a Ebay seller in Germany for my Hyboria collection  and the box when it arrived was deposited into the draw of shame and he must have tumbled out into the chaos of the  draw . I  took this to be a sign from the Gods of Wargaming to get him painted , he had a basic paint job with no shading at all so I've repainted him from scratch and added some dramatic shading which I think you need to make flat figures look right . He will be an Officer/Standard Bearer for my next unit of Cimmerian's which he has inspired me to start painting up ready to be commanded by Conan (hopefully if you click on the photo it will enlarge) 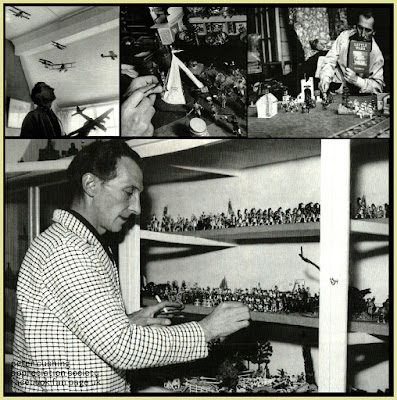 Came across these photos of Peter Cushing and his toy soldiers on a site on Facebook , a couple I've seen before but not the others . 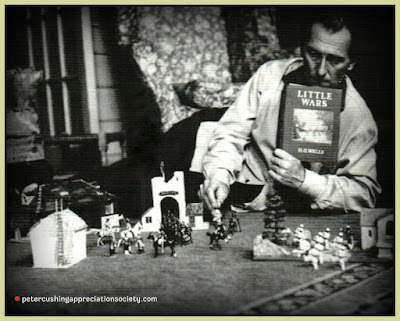 I wonder if he really used 'Little Wars' or was it purely for effect ? 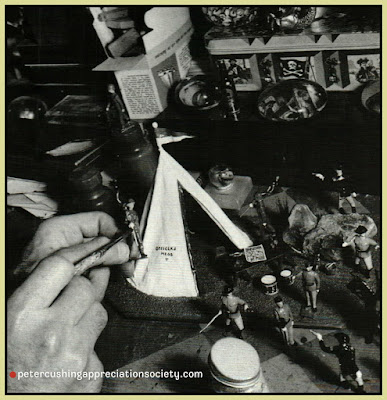 The photos originally came from the 'Peter Cushing Appreciation Society' 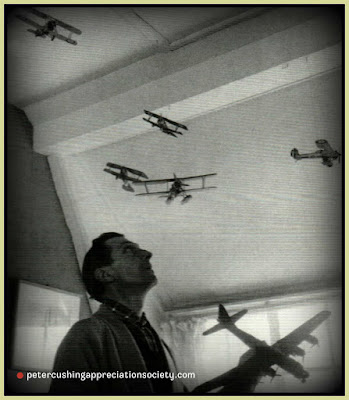 I didn't know he was into model aeroplanes though , hanging models from the ceiling - we've all done it ! 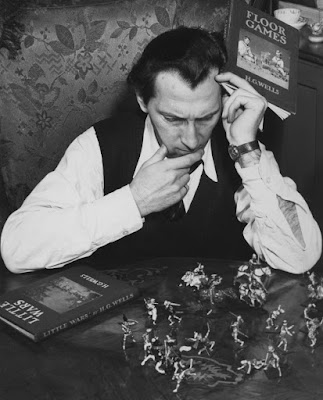 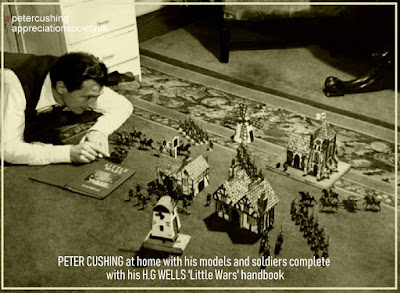 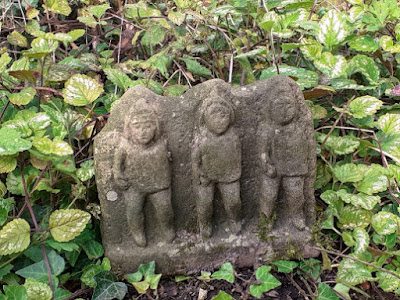 Look what I found at the bottom of the garden whilst hacking back the jungle . Many years ago I did quite a lot of voluntary work with the National Trust on Hadrian's Wall helping on various excavations and visited the wall several times a year . On most return trips I used to call in at Carlisle Museum to look around their bookshop , they sold at one point resin casts of various Roman statues that where in the museum . It must be 30 years ago since I bought this one , it is of three Genii or spirits ( Genius Culcallati ?) each wearing a hooded cloak and carrying an egg in their right hand - a symbol of good luck . There is a theory that they are the forefathers of the humble garden gnome . 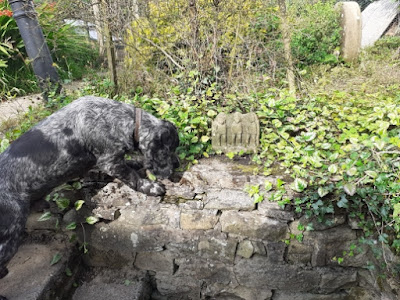 Of course I made the rookie mistake of not adding a scale to the first photo so here's a second with Charlie for scale . 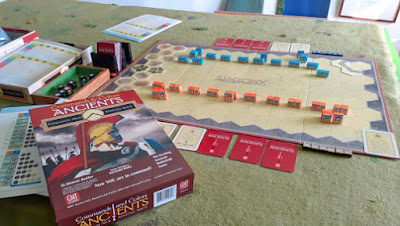 Believe it or not there is wargaming going on in the background - but not very photogenic , working my way through he Spartan C&C expansion . Back to Toy Soldiers next week !

Email ThisBlogThis!Share to TwitterShare to FacebookShare to Pinterest
Labels: Ancients, Others 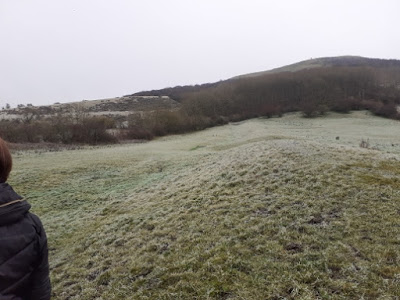 I find I don't use my camera very often nowadays and like everybody else use my phone (which probably does as good a job with my basic photographic skills) . So when I was sorting out the memory card I found I had not used it since last November when we were on holiday in Bradwell in the Peak District , A couple of photos had me puzzled for a moment - pictures of bumps in a frosty field (I have taken lots of this type of thing to illustrate various historic sites)  but these seem even more enigmatic - then I remembered it was when I found the Grey Ditch !!!  , here seen sweeping majestically upwards towards the tree line . Well what we are seeing is the upcast or rampart the actual ditch is to the left (lighter green ?). 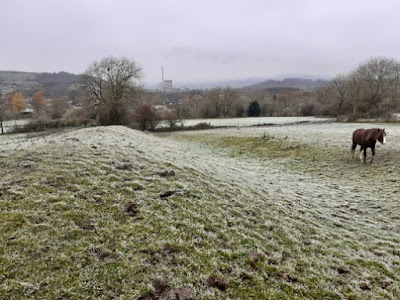 From the same place looking the other way (the horse will become significant later in my tale) I'd read a little about it in the tourist literature at the cottage we were staying at and was super excited when we came across it whilst walking the dog . Historic England class it as a linear embankment and adjacent ditch which stretched across the entire valley and is dated by pottery finds to be post-Roman 5th/7th century , it was originally 8 feet high and 22 feet wide at it's base and the ditch was of equivalent width and a further 6 feet deep - that's some big hole and pile of earth ! I was very pleased - as pleased as Punch as they say ! - my wife less so , she wasn't impressed - it was cold and me capering on a bump in the ground probably didn't help - then she saw the horse - she doesn't 'do' horses neither does the dog who was whining by now - so she and him left for the next field via a stile- I though " I'll take a few more shots then join them" . However the horse was lonely and very friendly and all I got were shots of it's nose and head , so abandoned the idea but vowed to return ,which of course I never did . 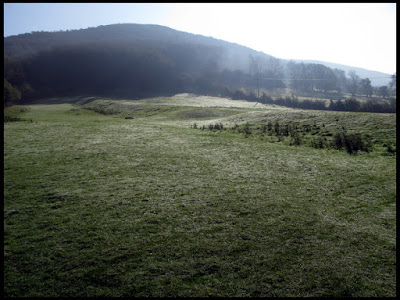 Another shot looking uphill (found on the internet - not sure who by ?).Theories vary but a boundary defense between Mercia and the Kingdom of Northumbria is possible as ditch like this exist in various places in England (Offa's Dyke being the most famous) and a local legend says that there was a battle in which King Edwin of Northumbria was captured and subsequently executed ,   locals remember the  'Eden Tree' where according to folklore Edwin was hung and it used to stand until recently by the road side to the North of the village . I must admit I find structures like this far more exciting than any amount of castles and stately homes , so thank you for your indulgence .

Email ThisBlogThis!Share to TwitterShare to FacebookShare to Pinterest
Labels: Ancients, Others, Weirdness 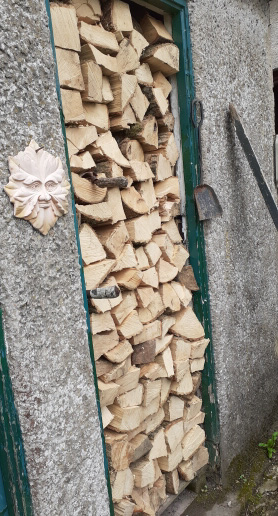 This week has not been a good one for wargaming activity as I have been restocking our wood supply . Not the most onerous of tasks but complicated this year by the fact that it was already half full ! . I get my wood from a chap I used to work with who has a wood and I usually phone him about September for a load each year, however this year he rang me to say that he was selling his trailer and wouldn't be able to deliver any more for the foreseeable future and if I wanted any he would deliver it tomorrow before the trailer departed - as I always get a good deal from him I said yes and it duly arrived . This then meant I had to remove the existing wood which was well seasoned and ready for burning into the shed and then wheelbarrow the new wood around from the front garden and stack it so it can sit for the next six months to season and here is the result - also a bad back and a grumpy old man .