A Merry Christmas To All. 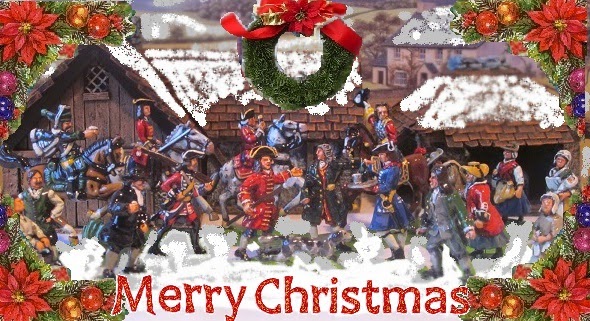 Wishing all out there in Blogger Land a Happy Christmas .
Posted by The Good Soldier Svjek at 05:02 8 comments: 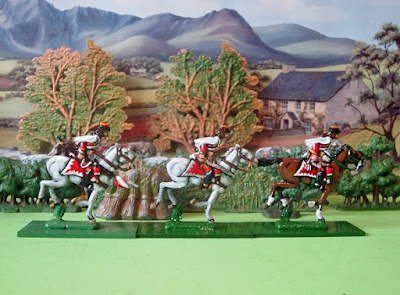 In an attempt to get my painting tray cleaned off for the new year I've got the 40mm SYW Uhlans converted and painted . I tried an arm conversion on them and it didn't work so I melted them down ,recast them and resorted to cutting away the lance and modelling a trumpet for the musician and a sword for the officer - L to R original figure , officer, trumpeter .(click on photo to enlarge) . Not as dramatic as I would have liked but they will do ! . I've got the three extra 54mm figures I cast up painted and varnished and was going to do a photo shoot outside (the natural environment of 54mm figures) but the weather has been wet yet again so had to resort to my usual set up in the bathroom ( experience has shown it has the best lighting for photographing toy soldiers). 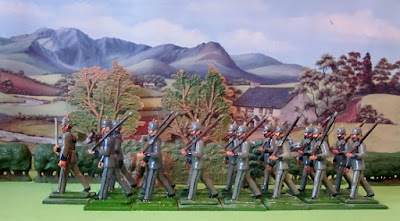 Here we see them with the rest of the finished unit , next year I plan to cast up some more 'Germanic' figures for there opponents 'Army Black' . 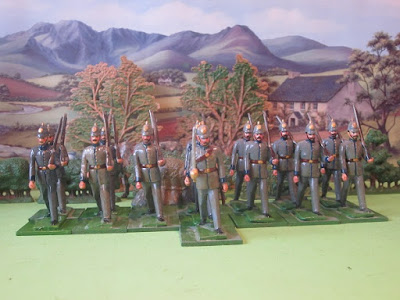 It was only when I came to put this photo on 'blogger' that I noticed - a) the dust on the bases of the older figures and b) the new figures are a slightly darker shade of grey - damn ! as it's nearly three years since I painted the original figures I've obviously forgotten which paint I used , perhaps it's not too noticeable . 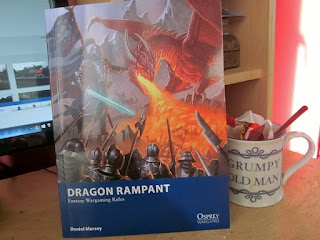 STOP PRESS:  Just arrived from Amazon my copy of 'Dragon Rampant' the fantasy version of the successful Medieval rule set 'Lion Rampant' . I have high hopes for these as they follow similar rules mechanisms and I have lots of various fantasy figures tucked away which never get used much . I have had a quick look through them with a cup of tea and biscuit and am impressed , more about these and test games after Christmas. 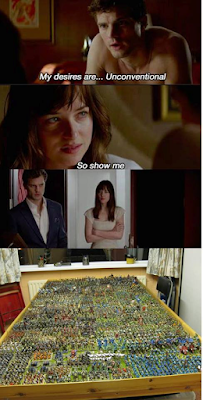 Pinched off  https://twitter.com/GravenGames - to good to miss ! (click on photo to enlarge)

A Case of Auto-Suggestion ?. 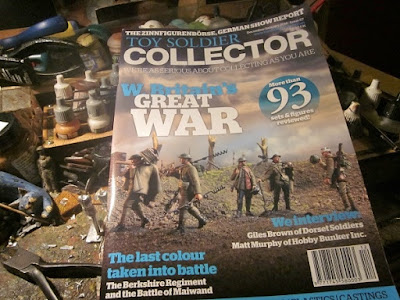 This morning my 'Toy Soldier Collector' magazine arrived in the post - It's the only mag I subscribe too nowadays - I rarely bother with the wargaming magazines . I then took the dog for a walk and this magazine had started me thinking about my 54mm project which has languished recently , by the time I'd returned home I was all fired up to cast a few figures  and start expanding my collection . 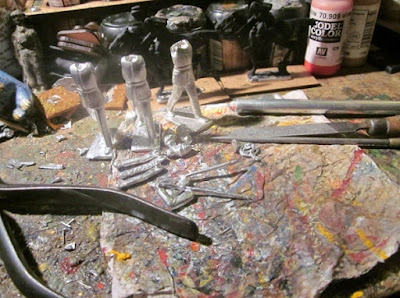 I'm expanding each of my units by 3 figures increasing them to 15 per unit . Here are the 3 figures for my 'Red' army .Lanarkshire Rifle Volunteers . The 'Toy Soldier' moulds from Prince August are I think some of their older ones and are I find difficult to fit together - needing lashings of 'Green Stuff' modelling putty . 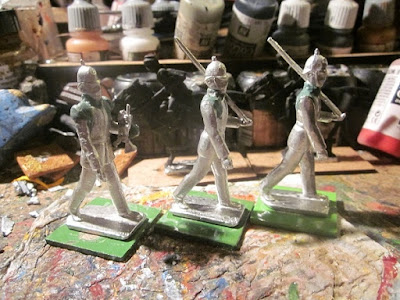 These additional figures will be another infantryman , a Sergeant and being a Light Infantry unit a Bugler rather than the more usual Standard Bearer . Here they are glued together, the gaps filled with 'Green Stuff' and based up. I've given the Bugler a instrument from the Irregular range of bits and pieces , They will need a bit of tidying up tomorrow - a bit of filing  of the filler etc and then a spray undercoat . I'll report back when I start painting them .

Just been looking at last years plans for gaming/painting in 2015 and I must admit I did stick to my intentions - well more or less . This year I'm NOT starting any new projects (Hmm! how long will that last?) I may expand on existing ones (reinforcing success) but the emphasis will be painting up figures I have already got - such as finishing off my Napoleonic lead pile - I have lessened it this year but there are still figures to paint . I am also going to try to find a way to use some of the figure that don't get used very often such as my Conquistador/Aztec's and the Bronze Age collection which I think I will revamp and use with a variation of 'Lion Rampant' rules . On the 'home cast' front I would like to do a few more 40mm SYWish and expand my 54mm 'Toy Soldier' figures - these will need suitable terrain to go with them . This year I think I will be using the rule sets that I've found the most successful ie 'Black Powder', 'Bolt Action' , 'TSATF' and 'Lion Rampant' a s these are the ones I can remember easily and they play well. It will be interesting to look at this entry in a years time and see if I've stuck to my plan .
Posted by The Good Soldier Svjek at 11:03 12 comments: 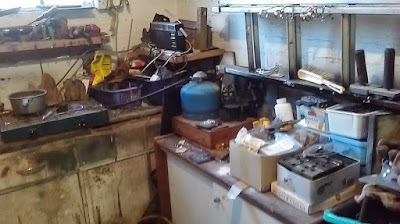 My wife took the dog out for the afternoon so I decided to clean out the 'washhouse' . Our house being a 1940's ex council house, it was provided with an outside bricked 'washhouse ' this being the days before electric washing machines and everything had to be boiled and hand washed - sounds very Victorian now ! . It is now used for storing the lawn mower , tools etc. I also use a corner of it for my casting , being single bricked and concrete floored its a bit chilly during the winter months and its also the place to dump things we don't know what to do with - "Oh put it in the washhouse for now!" we say and after about 6 months you can't open the door for 'stuff'. So I set off on this Herculean task and the fist thing I did was accidentally knock all my moulds over onto the floor - the cat left at this point due to the language being used . So I reorganised my moulds and the casting area , now the more fastidious of you may not think it looks very tidy -BUT - you should of seen it before I started !. Half way through the cleansing process our neighbour called to ask if he could borrow my ladders (notice hooked onto the wall in photo) -I had to stop and get the ladder out- a process that resembled a 'Laurel and Hardy' routine. To celebrate this mammoth task I've cast up a couple of 40mm Uhlan figures which I'm going to turn into command figures for the recently finished unit and will post photos of them when done . 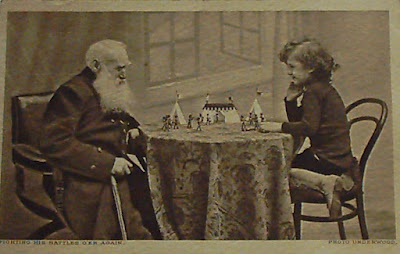 I was looking at this old postcard on Ebay and my wife leaned over my shoulder and looked at it and said " Oh ! that looks like you playing with your toy soldiers" - I swiftly asked which one was me ? - she then retreated without further comment ...........

Sad to say the RCW game didn't really work , this may be due to me rather than the rules . Still a bit under the weather with my 'man flu' , the conditions for dog walking are vile outside and I found the rules a bit bland . Hmm ! , I was tidying the scenery away and thought " I need comfy slipper wargaming!" , Soooo .......... 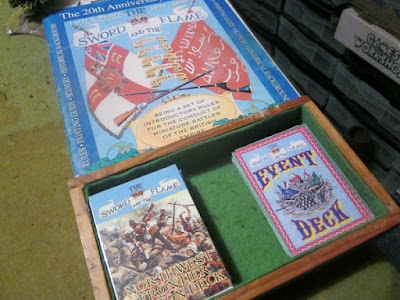 Back to my old favourite - 'The Sword And The Flame' Colonial rules. I've played the 'Desert Island Wargaming' game many times on long car journeys with 'A', 'S' and 'R'  - " if you were to be shipwrecked on a desert island which set of rules and two armies would you take with you ?". Mine is invariably TSATF and North West Frontier armies !. 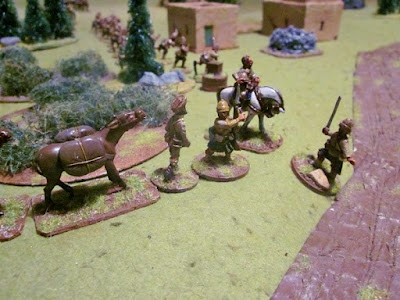 So I set up a couple of forces and thought of a quick scenario , here we see the British command group Colonel 'Creepy' Crawley (mounted) and Captain Mc Donald of the Highlanders with Sgt. Major Scott who is directing the mules carrying the spare ammunition . 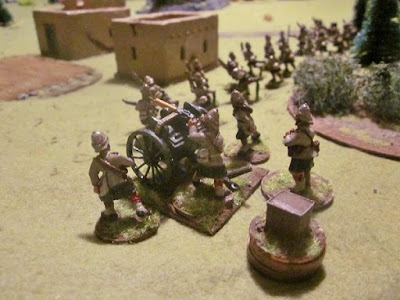 The Highlanders have a Maxim gun as well , the crew had to be converted from ordinary infantry by being given kilts . The pile of pennies represent the amount of ammo available . 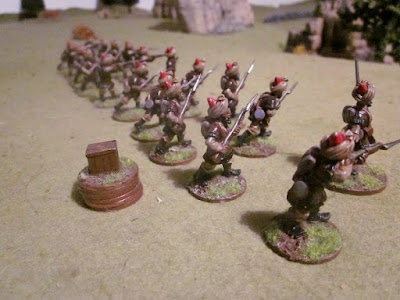 A Company of Sikhs deploy in open order again with their ammo supply . 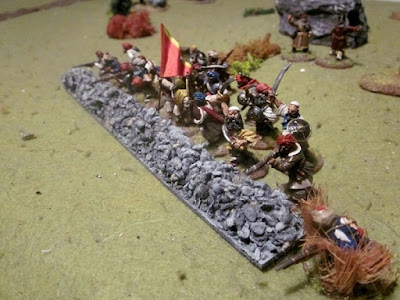 The Afghan tribesmen have deployed behind stone built sangars . (cat litter (unused) glued and painted onto a strip of wood) . 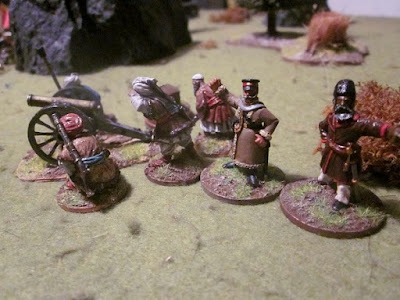 The Afghan Khan has a difference of opinion over the positioning of the artillery with the Russian adviser . 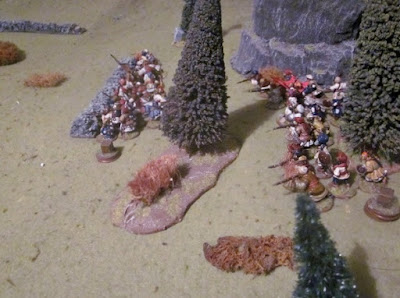 More Tribesmen move onto the table . I diced for the initial positioning of the units on the table . The figures are a mixture of Foundry and Old Glory . 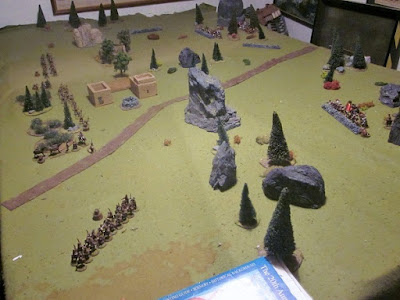