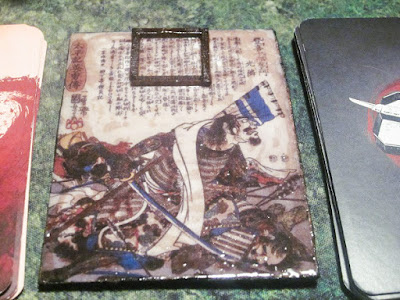 I'm playing a linked campaign using 'Test Of Honour' Samurai rules and several of the scenarios need the turns counting , now I normally put a dice on the table top to remind me of the turn number - BUT I always seem to either mislay or end up using the dice for rolling and so loose count ! . So I hit upon this idea pinched from a Board Gaming site and made a dice holder . I printed off a suitable Samurai image from Google and stuck it to a piece of fine Oriental wood - well MDF actually , I then glued four small pieces of MDF onto it to hold the dice and gave the whole thing a couple of coats of gloss varnish . 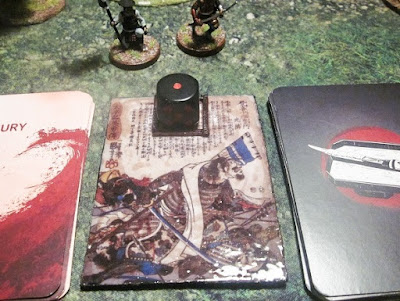 Here we see it in action !

Email ThisBlogThis!Share to TwitterShare to FacebookShare to Pinterest
Labels: Samurai 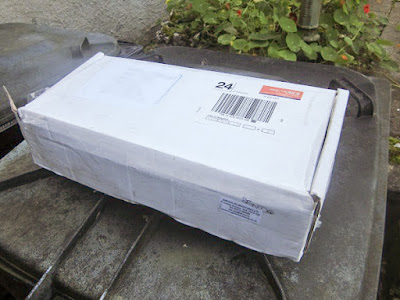 'A' dropped off this box the other day - a very heavy box full of toy soldiers ! . He had asked me to paint up some figures for his new project - 'The German Invasion Of Britain 1897' which I believe is based on a series of articles in a newspaper at the turn of the century about the threat to the U.K. from Germany. 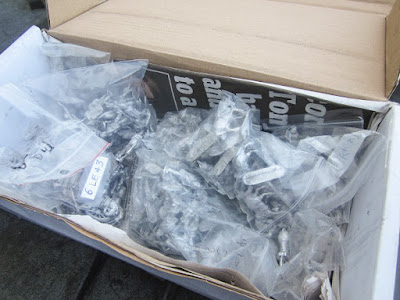 OMG ! there is a serious amount of lead in the box ! . He is using Irregular Miniatures 28mm figures , the British are from the 'British Home Service' range and the Germans from the Franco-Prussian range . He is planning to use a modified version of the 'Black Powder' rules with the standard unit of 12 figures for the infantry and 6 for the cavalry . 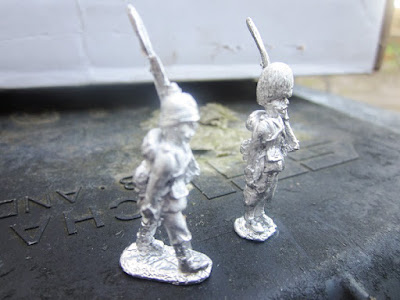 A couple of the British figures , rather nice ! , so I have a lot of cleaning up of figures , basing (using 1p pieces) and undercoating to keep me busy in the future. I will post some photos when I get some of them painted

Email ThisBlogThis!Share to TwitterShare to FacebookShare to Pinterest
Labels: 1897, Others

And they said it would never happen ! - after a break when my Generals went on holiday , then I went on holiday - we have returned refreshed in mind and body and getting back into wargaming ! . Here we see the situation on the 4th Day of the campaign with two action developing , one in the North of the map and another in the centre , we will be re fighting the centre action first . 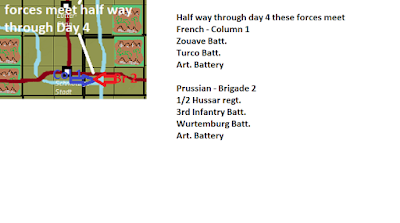 The forces have met half way through the day and comprise the above units , this is an important battle as both forces need to push past each other to capture their respective objectives , the French have to capture the bridge and demolish it and the Prussians have to take the town (Schutzige Stadt) . The players have sent in their orders of march and will more detailed orders when the table is set up , which hopefully will be later next week . ( click on the maps to enlarge )

Posted by The Good Soldier Svjek at 13:16 No comments: 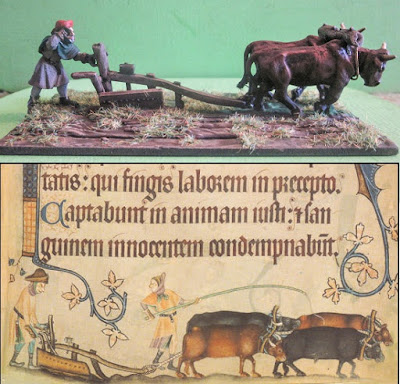 This figure and oxen have been waiting to be based up for over six month and so on returning from our holiday I got him finished . He's a 28mm Foundry figure for my 'Lion Rampant' Medieval skirmish project . 'Patience is a virtue' as William Langland said ! 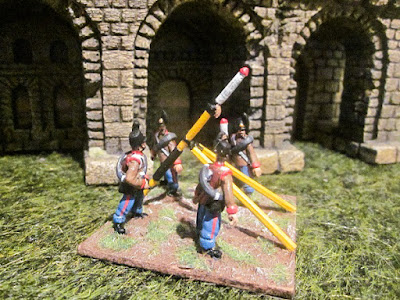 The Austrians had rocket batteries in 1859 , in fact they used them in the First Schleswig-Holstein war 1848-51 , but what they looked like I have no idea ! , I have Googled them but came up with no results , Irregular do a Congreve Rocket in their Napoleonic range - so I asked Ian if he could send me one with a replacement Austrian gun crew - as always he was happy to help . If anybody has any more info I would be pleased to hear , till then this model will have to do ! 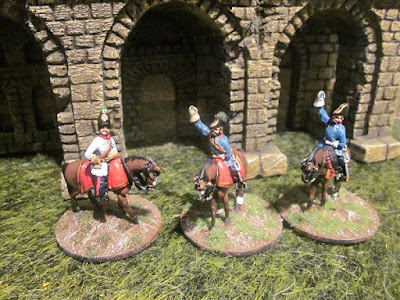 One of the drawbacks with Irregular is that they tend to do only one General per army . So I have been making variants for my 1859 Austrians . The right hand figure is the original figure , the centre one is a slight conversion using a different horse, adding a sash and plumes to his bicorne using 'green stuff' . The left hand figure is a more ambitious conversion using a British officer in 1890 Home Service Dress (!?) , I scraped off the various straps over his shoulders , added  coat skirts  , sash and  lengthened the  trousers using 'green stuff' . I cut the head off and added an infantryman's head and shako . 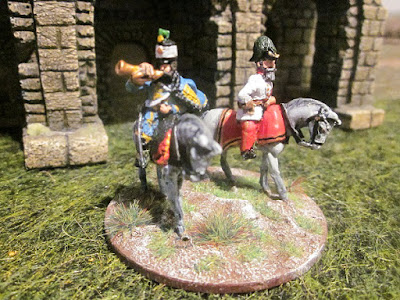 This is the Austrian Commander in Chief and a Hussar bugler on the command base , he is a British General from the Irregular '1890 Home Service Dress' range with a rather  impressive beard ! . I cleaned off the various straps, added longer coat skirts and trouser legs , I also added a sash around his waist . I CAREFULLY cut off his peaked cap and added a bicorne , tidying up with 'greenstuff ', so that is the Officer Corps sorted out for my Austrian army . 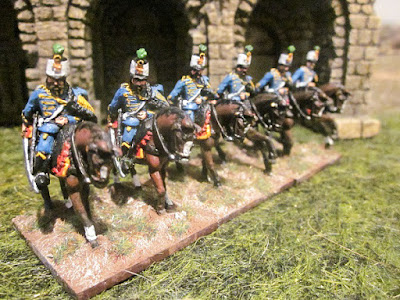 Still beavering away painting 1859 Austrians for my Second Italian Wars of Independence . These are Austrian Hussars from the  12th Regt. Heller . They probably should have a black waterproof cover but that would mean you wouldn't see the white shako. 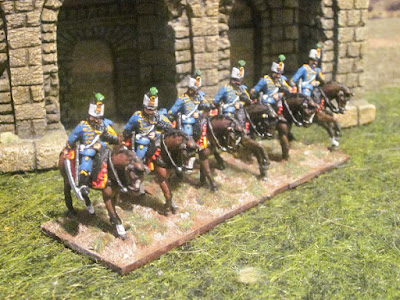 They count as a 'small' unit under Black Powder , I'm not painting a lot of  cavalry for my various armies as not many seemed to be used in the smaller actions in Italy that I'm playing . 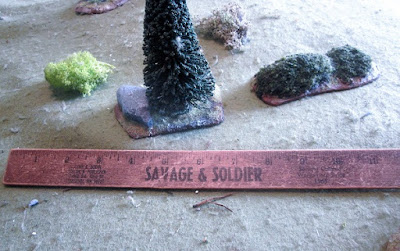 The other evening 'A' came round for a game and whilst playing he borrowed my ruler and remarked "you must have had this old thing for ages!" and "I thought I broke it ?" - the answers where 'yes' and 'yes' and 'I repaired it !' . This set me thinking how long have I had it ? . To the best of my recollection I acquired it at 'Northern Militaire' when I bought a couple of 'Savage and Soldier' magazines from a trader and was given it as a 'freeby' , now there hasn't been a 'Northern Militaire' wargaming show for over twenty years or more so that is probably how old it is. 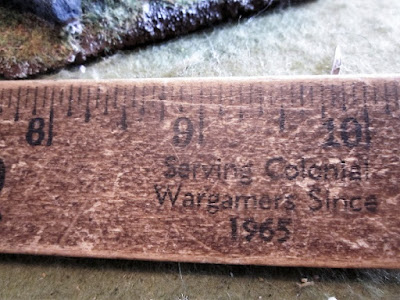 Savage and Soldier was a magazine which dealt with Colonial warfare and wargaming (sadly I don't seem to have any copies left in my collection) and seeing it had been 'serving wargamers since 1965' must have been one of the first gaming magazines out. 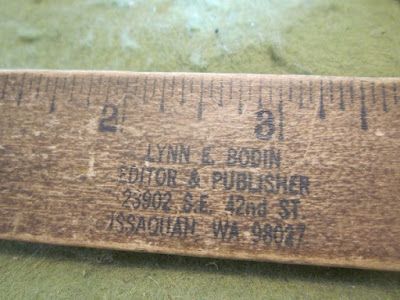 It has served me well and suffered injury in action - 'A' was making a dramatic sweeping action mid battle hence the breakage - which was repaired using wood glue and is as good as ever . A fellow blogger was remarking how difficult it was in this metric era to get twelve inch rulers nowadays , so I had better look after 'Old Faithful' . (just found that some of the original articles can be found at http://www.savageandsoldier.com/)

Well my two Generals have returned from their holidays and we have got to Day 4 of the campaign (click on map to enlarge ) . In the South the French have spent the whole day building a temporary bridge over the river after the Prussians blew it up  . In the centre the two forces have met half way through the day , so they need to make decisions on the forthcoming action . In the North the Prussians are pushing forward to their second objective  (the town of Nebel) and have caught up with the French Cavalry Brigade , so another potential battle . However these two actions are not likely to be played out in the next couple of week or so as I'm away on holiday myself soon . Too be continued (soonish) ..........
Posted by The Good Soldier Svjek at 12:50 No comments: