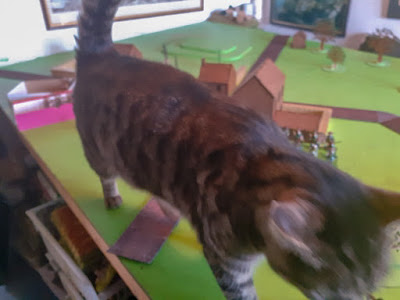 First of all - evict Hugo from the photo shoot ! 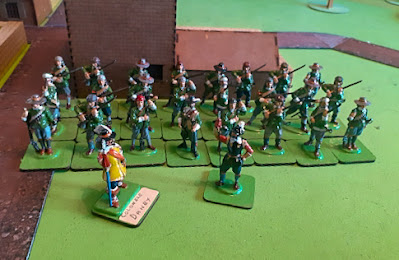 Colonele Danby parades two compamyes of musketeers of his Regimente of Foote on the College Green in Felpersham , he now awaits the arrival of a Companye of Pikemen to bolster his force ready for his march on Borchester to evict Royalist curs ! . 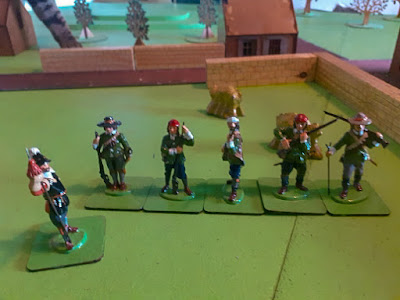 His Sergeante demonstrates 'The Postuers of a Musketeer' . There has been a bit of a hiccup in getting these figures table ready as my varnish went solid and I had to wait till I went into town to get a new one . (I have a theory that the makers of varnish like super glue producers make most of their money for their customers never using 100%  of the products before it goes hard) .
Posted by The Good Soldier Svjek at 01:54 8 comments: 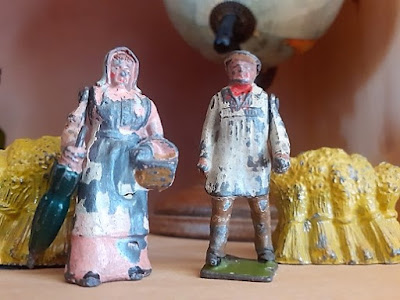 Just got these figures off Ebay , think they are Britains hollow-casts and will add a touch of rural life to my 54mm games . Clarrie Grundy and Walter Gabriel perhaps ?
Posted by The Good Soldier Svjek at 12:57 10 comments:

Shiny in the sun . 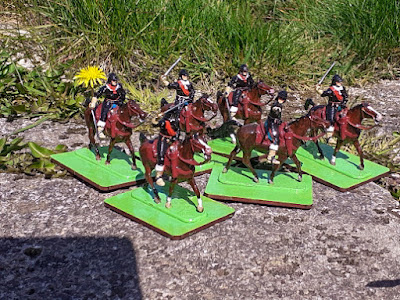 Taking advantage of the sunny weather and the absence of the dog I thought I'd photograph the newly varnished 54mm ECW figures I've got done . First up is Nigel Pargetter's Troope of Horse , nice figures that fit their horses well and only one annoying pose - the chap shooting to his right . 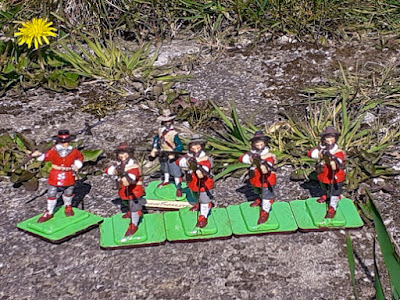 Next Thomas Forreste's group of 'Commanded Muskets' , think I should have taken these photos in a bit more shadow , didn't realise how 'glarey' the sun was. 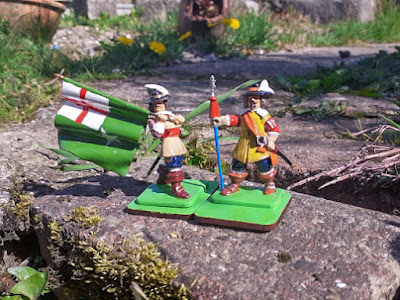 Got the Parliamentarian Commander done, 'Colonele Danby' and his Ensign . 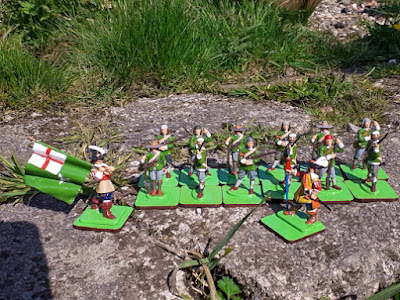 Here seen with the first Companye of Musketeers of Col. Dandy's Regt. of Foote .I hope to crack on and get some more painted this week ready for the first clash in Borsetshire.
Posted by The Good Soldier Svjek at 06:49 15 comments: 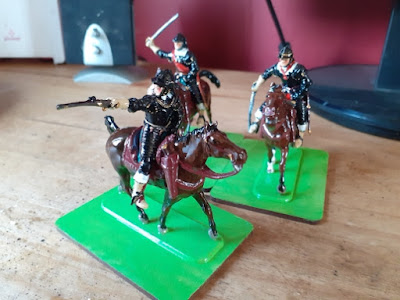 Just a quick update as I've just realised it's a week since I posted . I've been busy painting up more of my 54mm plastic ECW figures and here are the first group of Nigel Pargetter's Horse for The Kinge , more to follow ....
Posted by The Good Soldier Svjek at 02:28 10 comments: 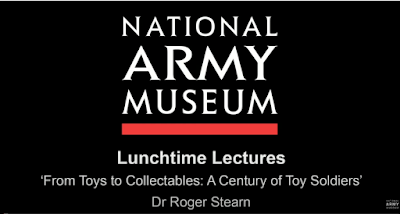 An altercation in the streets of Borchester. 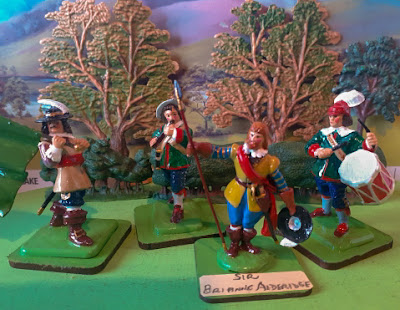 On the 6th instant being St Berthane Day , Sir Brianne Alderidge did cause 'sweete martiale musick' to be sounded in the streets of Borchester to recruit men for the 'Trained Companyes' in support of the Kinge . 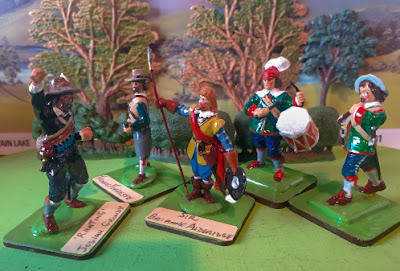 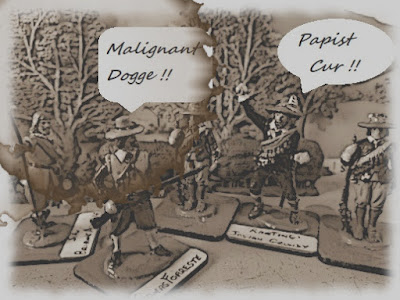 He is dragged away under escort by Sir Brianne's gamekeeper 'Thomas Forreste' and exhibited till dusk in the market place stocks . The above picture comes from the 'Borchester Mercurial' the local broadsheet that dates back to 1600 . I was lucky enough to be able to view the origanal copy in the Felpersham University reading rooms *, having a much sort after readers ticket and will try to track forthcoming events using these original documents .
*I must point out that these illustrations are used with the permission of the University of Felphersham  Archive Dept.
Posted by The Good Soldier Svjek at 06:29 18 comments: 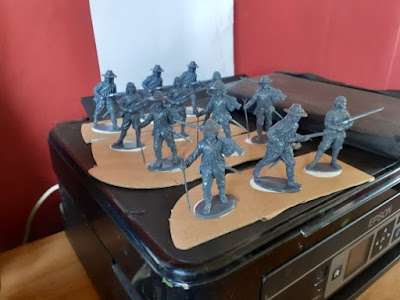 The blame for this project must be laid squarely at the door of  'Vauban and Shandy' blog Vauban and Shandy - Flanders Garden Wargaming (shandyandvauban.blogspot.com) for getting my juices flowing for large scale ECW wargaming . 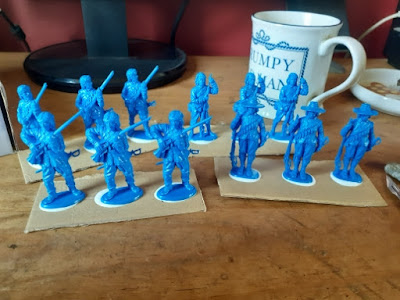 The figures are 54mm by 'A Call to Arms', here being cleaned up and glued temporarily to card for undercoating and painting . Pleasingly they are in suitable restrained postures (well with a couple of exceptions ) suitable for gaming . I was lucky enough to get a deal from an 'on line' Model shop and got one of each of their boxes , they do a Command , Pikemen , Artillery crew , Field Gun , 2 boxes of Musketeers and 2 Cavalry  . I've also ordered some more odds and sods from Ebay to bolster my forces . 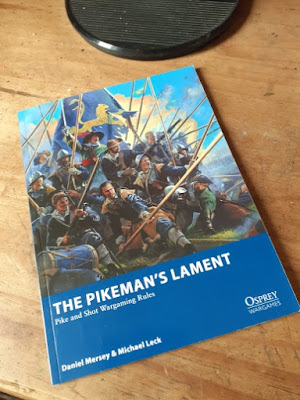 The next question was - which rules !? , I have decided on 'The Pikeman's Lament' it is designed for small actions/skirmishes which will be the main tabletop games portrayed in Borsetshire . It is based on the successful 'Lion Rampant' system which I have played a lot and like , they also have 10 scenarios which is very useful . 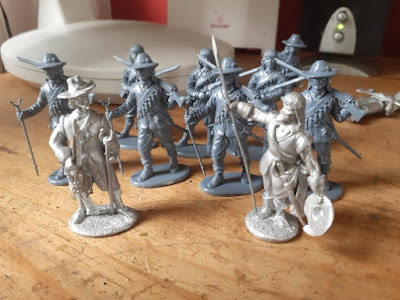 I also have a few Irregular 54mm which match very well with the plastics and I will probably use as personalities  - here we see Sir Brianne Aldridge talking to his game keeper Thomas Forreste . I hope to get a couple of small forces sorted out and try the rules out soon .
Posted by The Good Soldier Svjek at 09:48 10 comments: