The Greate and Terrible Civil Warre in Borsetshire . 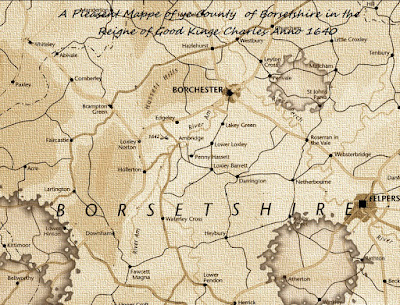 Coming to a Blog near you soon , the troops are being gathered , the Campaign is being formulated , will Sire Briainne Alderidge hold the County for Ye Kinge or will the forces of Milignant Discontent under the Leveller Grundy claim it for The Parliament ? .............
Posted by The Good Soldier Svjek at 08:45 17 comments:

H.M.L.S. Thunderchild in action on The Patio. 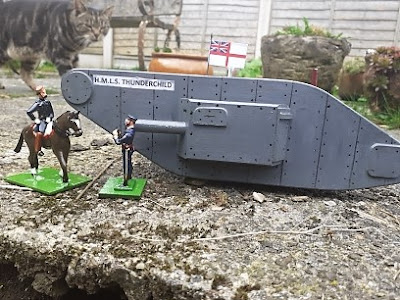 I've got my wooden 'Landship' finished and took the opportunity of the fine weather to take some photos outdoors. (note - in the background is one of the gigantic felines that roam The Patio ) 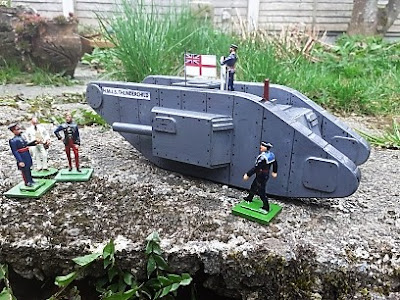 Here we see General Stoores , Mr Kipling (war correspondent) and Col. Flashman inspecting the Landship 'Thunderchild' . Against a lot of opposition from the military it is being crewed by Naval personal under Capt. 'Jolly Rogers , here seen standing on the upper decking . 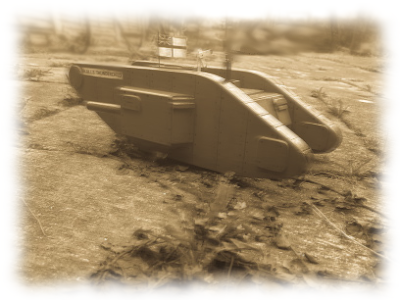 Although it arrived to late to see action in  'The Great Patio War' it was put through several training missions and the hard surface of the Patio proved a perfect terrain for its movement . Here we see a rare still photo from a now lost piece of cinematography* of the Landship .in motion. 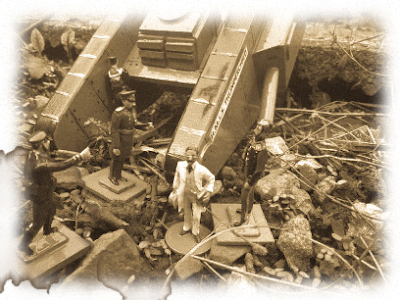 However not everything went as planned , whilst maneuvering over some rougher terrain in got stuck and had to be partially disassembled to recover it . The above photo is from Kipling's 'Dispatches from the Patio' , a publication which was heavily criticised at the time for it's anti Red Army stance . It was so badly received  that Kipling temporarily abandoned his writing career and went back to the family cake confectionary business before returning to writing childrens stories .
*a sad loss as it was probably one of the first military action films .
Posted by The Good Soldier Svjek at 11:56 19 comments: 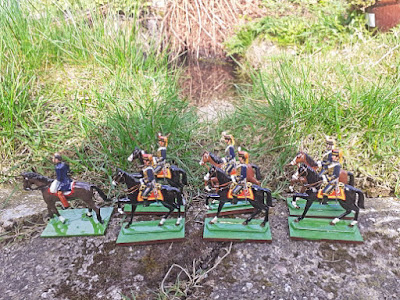 Here are the newly restored cavalry figures I was saving from 'lead rot' , the weather being sunny I took the opportunity to photograph them outside - whilst fending the dog off from investigating to closely . 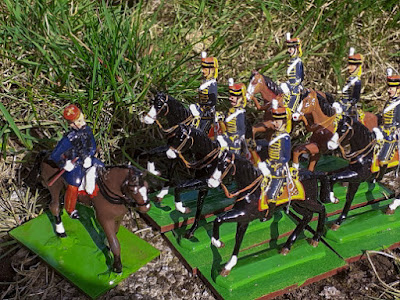 Here we Col. Flashman inspecting them . Think I've managed to match the colours to the originals successfully and given them all another coat of varnish to seal everything . I'm pleased with how they have turned out and look forward to them appearing on the tabletop soon . 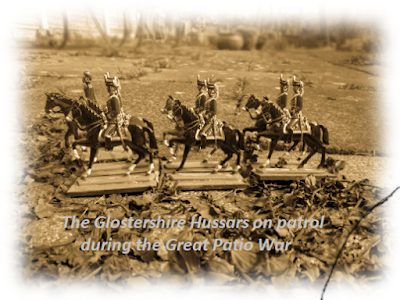 Whilst thumbing through my copy of 'With The Guns To The Patio , The Dairy of Lt. Mackison' (Almark1972 *) I came across this photo supposedly taken during the war.
*it is a great pity this book is long out of print and hard to find nowadays and commands such high prices when it does come up for sale .
Posted by The Good Soldier Svjek at 05:35 18 comments:

The Worm in the Bud . 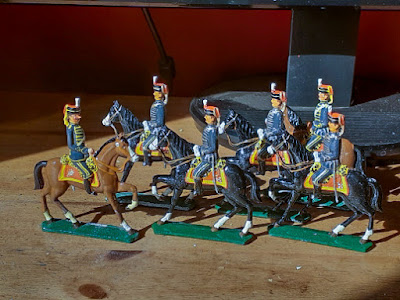 Always having an eye open for a bargain I was intrigued to see these 54mm semi-flat figures on EBay for only £2 each ! - however the seller pointed out that they had reacted badly to their storage and had damaged paintwork on one side where they had reacted with the paper they had been stored in . I thought at that price I can't be bit - so I ordered them and they arrived promptly . 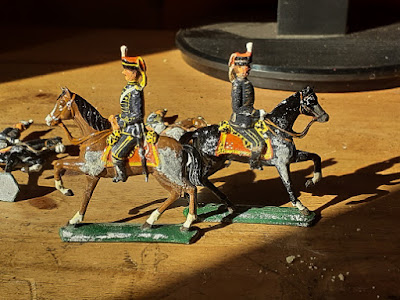 Lead Rot !!! - I've only come across it a couple of times in 50 years collecting toy soldiers , it can be caused by dampness but it seems to be the contact with the storage material as only one side of each figure is affected . 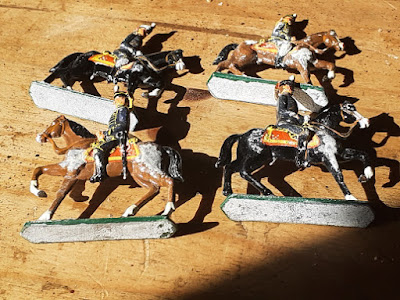 Also the unprimed basses have been effected . I have been investigating 'lead rot' on the internet and it's rare in modern castings (the two others I've come across were early 70's Minifigs) and luckily not contagious and it can be treated . 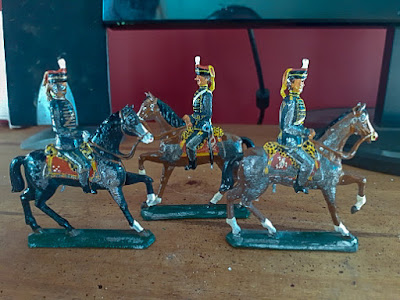 On further investigation I think the figures are pure lead - which would help in the rot and when scraping some of the paint off, not undercoated another cause of the rot . I've wire brushed the effected areas with my Dremel back to shinny metal and I think its only started to affect the paintwork as there's hardly any pitting on the metal . I think I might have caught them just in time so I'm giving them a wash in soap and water and letting them dry before undercoating the damaged areas . I'll report back on further progress .
Posted by The Good Soldier Svjek at 07:08 18 comments: 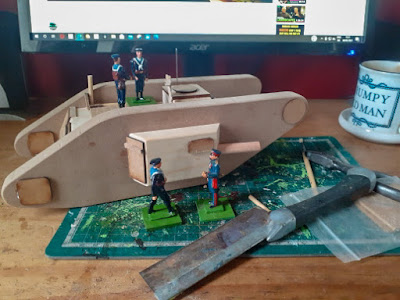 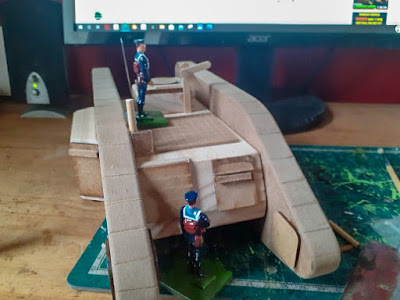 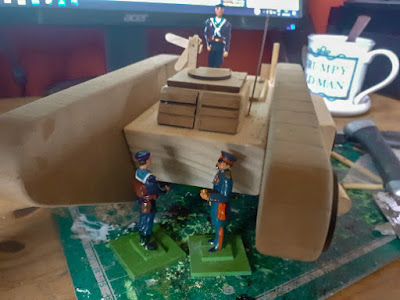 The front with armoured hatches and visors for the Helmsman and Commander and a better view of the semaphore signal. 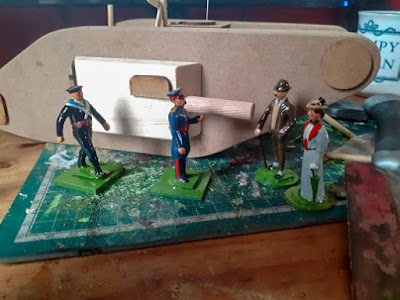 The project has caused a lot of interest and here we see a junior Member of the Government and his wife being shown around the Landship's progress . I've given the tank two coats of black undercoat and when it's dry will give it it's final 'Battleship Grey' finish and paint on some more details .
.
Posted by The Good Soldier Svjek at 03:54 14 comments:

We Have Ways Of Making You Talk - Podcast.

I'm indebted to my friend 'R' for telling me about this podcast , very interesting and scholarly with over 200 episodes about various subjects of World War Two .Home – We Have Ways of Making You Talk Podcast (wehavewayspod.com) Just been listening about the British Auxiliary units who were to be the British resistance in the event of the German invasion , still shrouded in mystery after all these years . 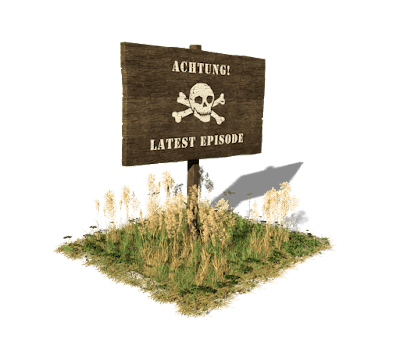 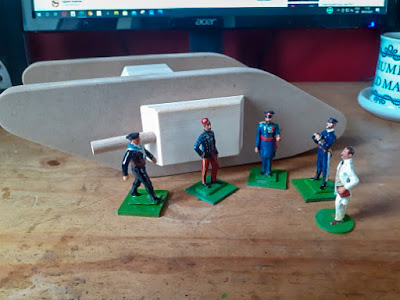 Today 'Army Red' took delivery of it's prototype Landship which is hoped to be ready for action soon. Unfortunately there is a dispute who is to provide the crew for this machine, the Navy is claiming it being a 'landship' it comes under their jurisdiction, however the Army says it should be them that man it. . 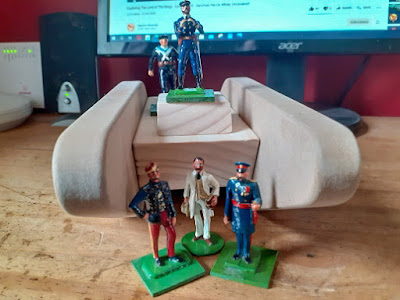 Here we see the pre-production mock up , with Captain (Jolly) Rodgers standing on the coning tower from were the ship will be steered, at the front L to R Col. Flashman , Mr Kipling (war correspondent) and General Stoores Officer Commanding 'RedArmy' Landship project . My thanks to Alan (The Duchy of Tradgardland: Landships and improvisation ) for drawing this model to my attention , it's available from the Bovington Tank Museum shop - who about now are wondering why there is a sudden demand for their wooden toy tank kit .
Posted by The Good Soldier Svjek at 04:29 12 comments: 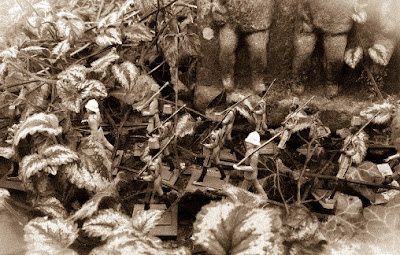 I've posted before on my fascination of that little know conflict - "The Great Patio War" (Tin Soldiering On: Mr Kipling Under Fire. (tonystoysoldiers.blogspot.com) and I'm very pleased to announce that three new startling photographs have come into my possession passed onto me by a collector who wishes to remain anonymous due to the heated controversy this subject always causes . As you know "The Great Patio War" has been little studied (probably due to the total incompetence of both sides in the conflict and the lack of documentation ) , it has been thought that 'Blue Army' used Colonial troops during this conflict and these photos show I believe photographic evidence of their presence . The above post shows a patrol of colonial Askaris with two European officers/NCO's moving through some heavy vegetation which is know to have bordered the Patio , there seems to be an ancient ruin or temple in the background which would fit with archaeological find for the area. 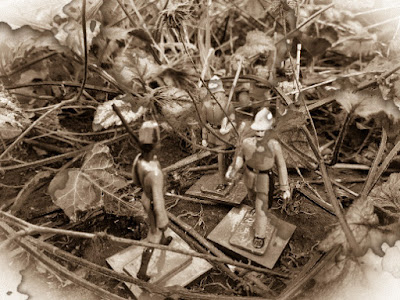 The photos are in a lamentable state and I have done my best to improve them, although a lot of staining remains . Here we see the same patrol (?) with an Askari reporting to an European Officer, a European NCO is I believe just behind them armed with a rifle. There is no evidence that the Askaris where used in the few field actions but their ability to patrol and scout the heavily vegetated  borders would have been a great advantage . 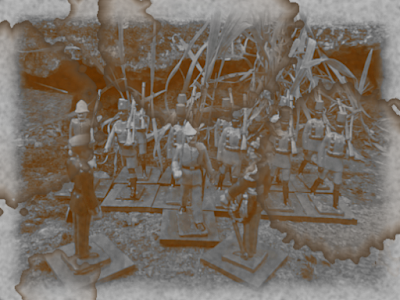 Although of the poorest quality this photo is of the greatest interest I believe it shows the 'Blue Army' Commanding Officer General Mouters , the Officer half turned to us on the right of the photo . If this is the case it would be conclusive evidence to the use of these troops during the war . The back of this photo has some writing in Prussian which is almost undecipherable , but the signature of a Capt. Blocke who was Mouter Aide can be made out . 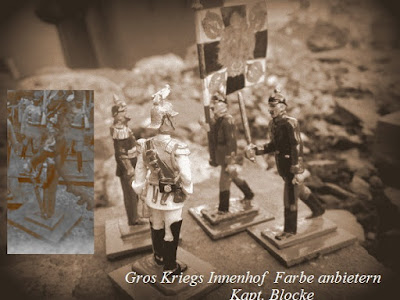 This photo see - Tin Soldiering On: Black Army On Parade. (tonystoysoldiers.blogspot.com) shows General Mouters on the left and a comparison the the new photo shows conclusively it is the same man , which I believe is hard evidence of the authenticity of these photos . Unfortunately Die grose deutsche Archiv   is STILL not available on the internet so further research is hampered . Mr Kipling is his book 'Dispatches from the Patio' does mention the use of these Colonial troops but sadly this hard to find publication has fallen from favour with serious students of the period . I must thank my wargaming colleague 'A' for trying to help with the deciphering of the German text on the back of the photo . I will report back on any further development to this very interesting mystery .
Posted by The Good Soldier Svjek at 06:52 11 comments: