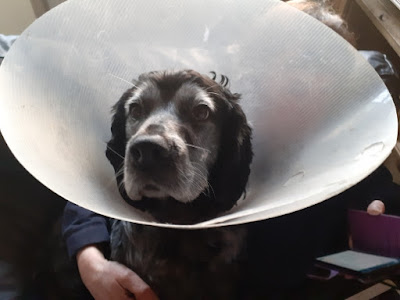 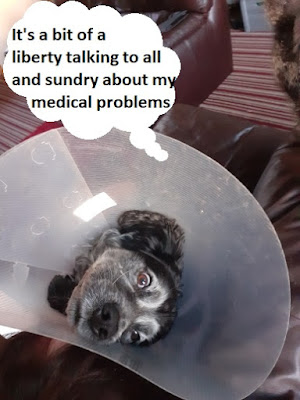 He has recovered remarkably swiftly (far faster than I would I think !) but is on antibiotics and some pain killers and has to wear this 'cone of shame' - which he is definitely NOT happy about - but needs it on to stop him licking his wound and pulling his stitches out . 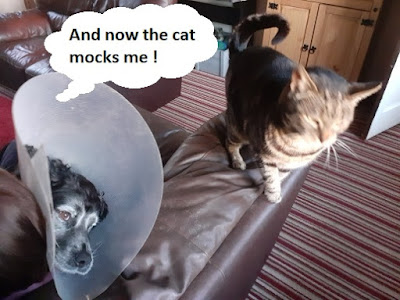 Our two cats are very intrigued by his neck wear . He has to remain on his lead when going for a walk and of course things like narrow stiles are definitely out of the question which has limited our walking routes . 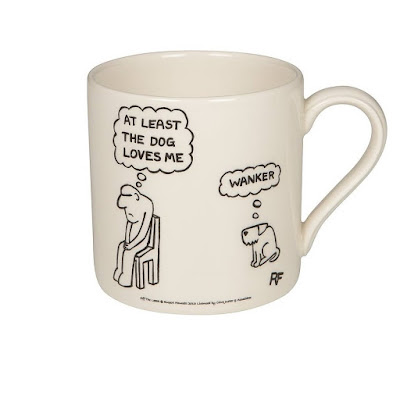 All in all he has managed very well so far and has to go back to the vets on Friday to have his stitches removed - so hopefully normal service will resume and we can get back to some serious walking .
Posted by The Good Soldier Svjek at 08:23 9 comments: 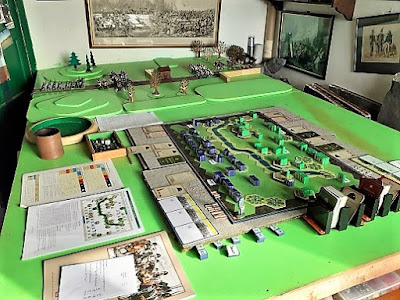 So I'm playing through the four scenarios from the Command and Colors Russian Napoleonic box and I got the yearning to have a miniature game as well , so having half the table to use I set up a AGW SYW-ish game on the other half.. 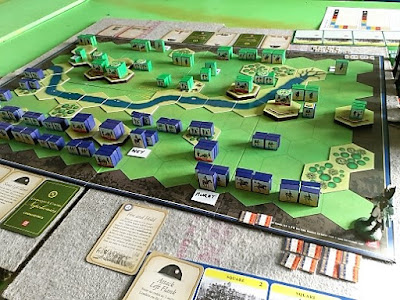 The fourth scenario - the French are attempting to storm the Raevski Redoubts, after three games  things are in the balance - so all to play for. 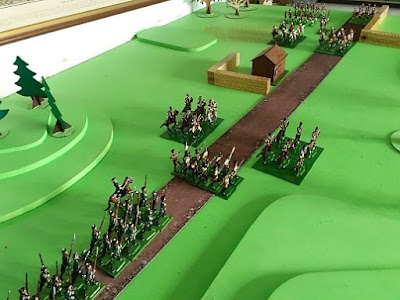 A  action with Allied Frei-Korps and Hussars versus  Uhlans and Swiss Infantry for the French, a small battle , but it should prove interesting .
Posted by The Good Soldier Svjek at 08:55 5 comments:

From YouTube, I was informed of this video by my wargaming colleagues 'A' and 'S' ..
Posted by The Good Soldier Svjek at 03:51 3 comments: 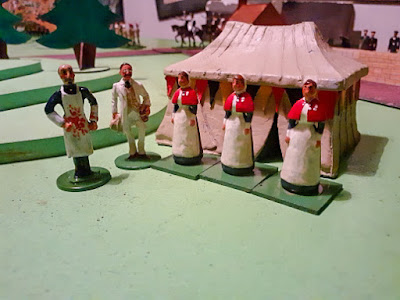 Just had my first Covid 'jab' today (very well organised as one might expect from our cracking NHS) and thought I should post a picture of my Medical services for my 54mm Toy Soldiers . Here we see Mr Kipling (War Corespondent)(in white) who is doing a piece for 'The Times' on our Field Hospitals  , three hollowcast Nurses I repainted quite a while ago and Surgeon Reynolds - a rather odd resin/plastic figure I'm not sure the origins of , think he could have changed his apron for the photo though  !
Posted by The Good Soldier Svjek at 13:19 15 comments: 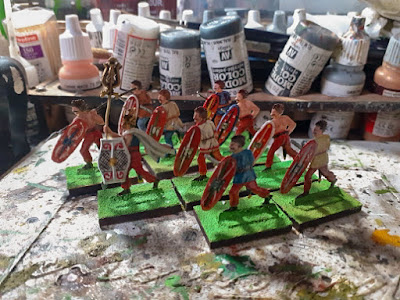 As a change from painting 54mm figures I've started repainting these 25mm flats , these are for my Hyboria project . They will be Cimmerian mercenary tribesmen and so will be able to fight for both Hyborea and Hyrkanian armies . It has taken a while to get back into painting flats , but I'm getting into the swing of things . 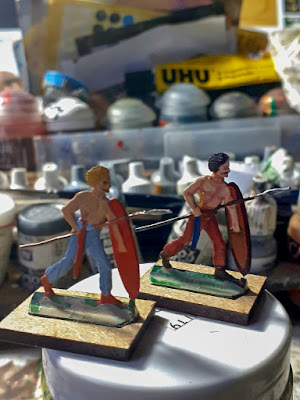 Nearest the camera the basic figure as purchased and to the rear the 'tarted up' figure ready for basing and a gloss varnish .
Posted by The Good Soldier Svjek at 10:17 8 comments:

Off at a slight tangent . 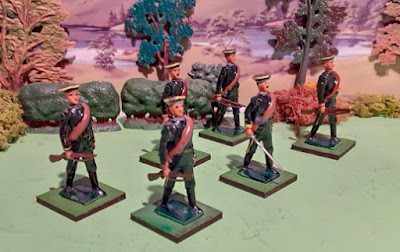 I bought four of these figures about 5 years ago and they have been busy marching across my bookshelves awaiting reinforcements  , I have managed to pick up another two, so building a small detachment for AGW. 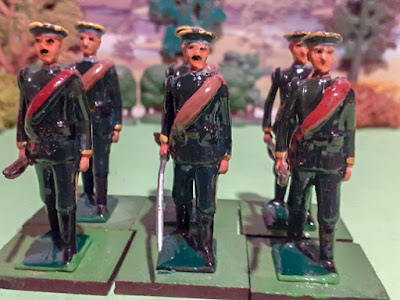 The two outer figures are the new ones - a slightly different paint job . They are Britains hollow cast Russian Infantry , initially brought out after the Russo/Japanese War and luckily I'm fairly lenient with my composition of 'ArmyBlue' so they will be joining their ranks as a small detachment of Jaegers . 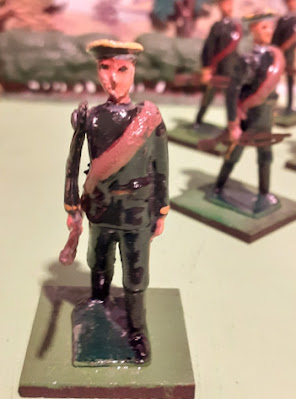 The face of a veteran , I've just based them and will not be touching their paint jobs or the bumps and scratches they have accumulated over their service .
Posted by The Good Soldier Svjek at 12:41 10 comments: 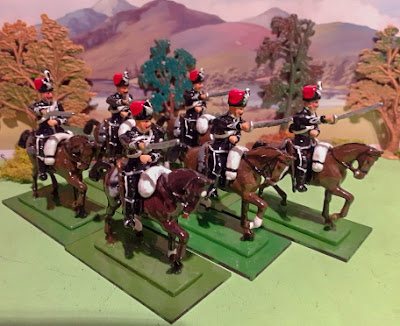 I've been busy casting the last couple of weeks and have managed to cast up and paint a unit of Hussars for my 'Blue Army' . The molds are of course by Prince August in 54mm 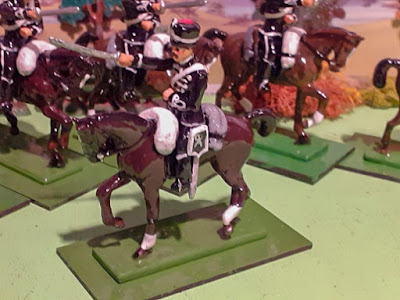 It has been a bit fiddly as each figure is made up of a two pieces horse , a base , two bits of saddlery , the riders body , arms , carbine , sabretache and scabbard . Times this by six figures and it has taken quite a while to get all the bits cast up correctly and glue then all together . 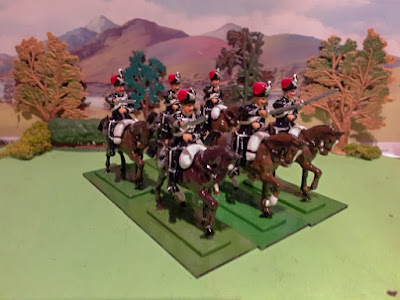 Luckily I had a lot of scrap figures (donated by 'B') as they have taken a lot of metal to get them cast - they weigh a ton - the horse being solid . I painted them using late 19th century Prussian Hussar uniforms as a guide and will join the Uhlans in the Cavalry arm of 'Blue Army' .
Posted by The Good Soldier Svjek at 12:28 20 comments: