A flight of fancy , The Adventures of the Walkers No.1 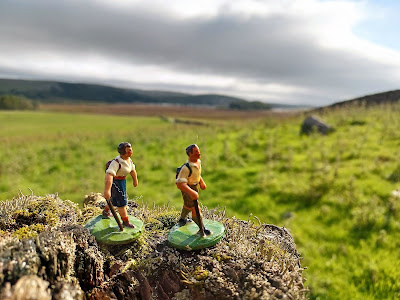 Not an original idea but with my own spin on it . On our various jaunts/walks I will be taking these two figures with me (if I remember to pack them and remember to photograph them) and taking suitable photos of them on the walk . 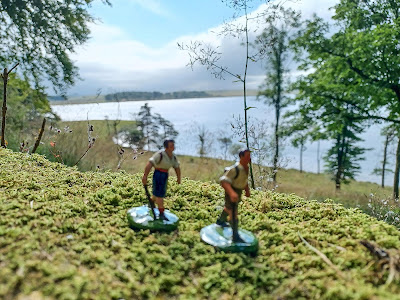 Here we see them circumnavigating Malham Tarn in N. Yorkshire - a bright but rather chilly Autumnal day . They have already made an appearance on this blog see - Tin Soldiering On: Mr and Mrs Walker get arrested . (tonystoysoldiers.blogspot.com) hopefully nothing as alarming will happen again .
Posted by The Good Soldier Svjek at 07:03 12 comments: 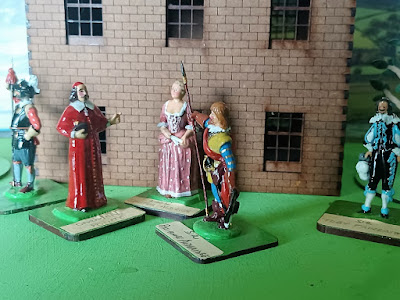 People have been wondering what Sir Brianne Alderidge has been up too ? . In the gardens of 'Greye Gables' a secrete meeting is taking place , the Spanish Ambassador  Cardinal Pointe has arrived to discuss the raising of funds for the Kinge's Cause by the sale of the Queene's jewelry and has chosen this secluded location to plan out the movement and sale of the jewelry . 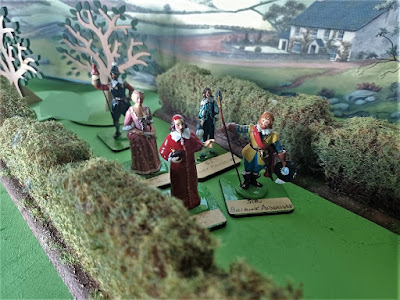 They wander through the ornemental gardens accompanied by Lady Gennifer Aldridge and Sir Toby Fairbrother . The plan is for Sir Brianne to transport the jewelry through Borsetshire to the Bristol Channel to take ship for Spain .. 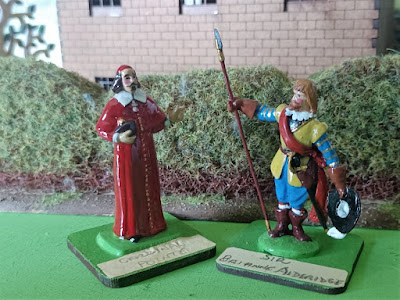 Sir Brianne and the Cardinal move aside so they are not overheard . 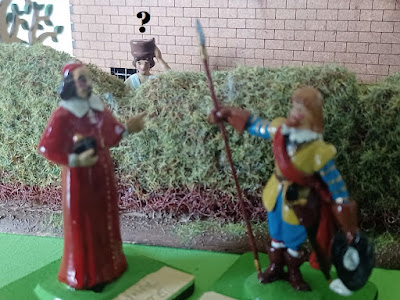 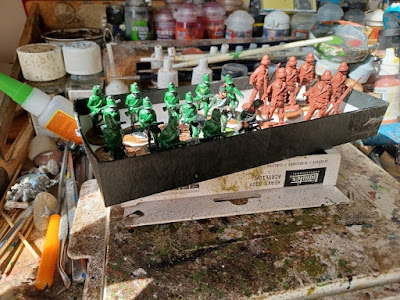 Just been having a tidy and came across these figures, bought about a year ago - based and undercoated and then forgotten ! . They are for my AGW 40mm Balkans Imaginations and are dismounted 'Green Hussars' for the Hellenyk Republic and some general irregular Mountaineers . They are of course Irregular Miniatures  - somewhat overcome with guilt I will be painting them up next .
Posted by The Good Soldier Svjek at 13:07 8 comments: 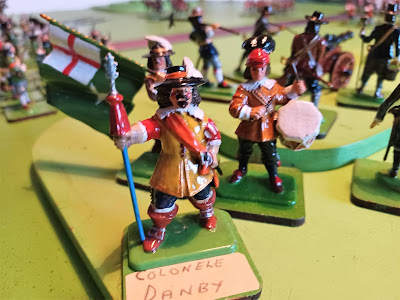 I was lucky enough to see some of Col. Danby's original correspondence when I visited The University of Felpersham and am indebted to Miss Goodbody in helping me decipher the text , his writing is at times almost illegible and  strangely spelt with very little punctuation... .

'I have the honore of reporting to my Lordes of the recent engagement on ye --------- we were marching to tare down ye Papist fortiphcations at Loxly Barret when our rightious waye was bloked by a suppirior force of the enemie We bravely engaged them our Dragoones causing their Horse to quit the field on the righte the enemie horse got amongs our shote on the righte but were bravely driven off the enemies pike rushed our lines but our shote played heavely upon them and casting downe there pike they flede the field abandonde thuse the rest of ther force lefte leaving the fielde of Honore to myselfe . One prisonere wetooke says the army was ccommanded by the malcontente ---- Pargetter Sire B---- Alderige being absente - whecence this devil is I now note - but up to GREATE mischefe I feare - I will continue my marche to tare downe the ediphices of popery ..

I have the Honore to serve youe furter

It is interesting to get a first hand account of the action although some what misleading as both forces were similar in size . It is assumed this letter (this being a copy) was sent to Parliament in London , I hope to find out what Sir Brianne Alderidge has been up to soon .....

(My thanks once again to the staff of  TUF records department) 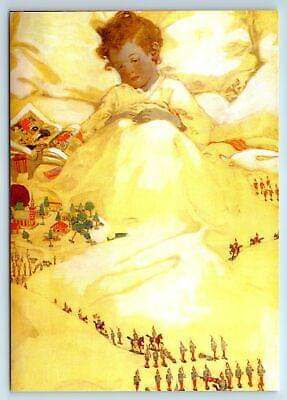 ...Hospital ! , hence my absence from these pages . Had a bad attack of Gall stones last Thursday and the following day my urine was the colour of a fine brandy , so my wife told me to ring the doctors - me thinking 'they will put me off till next week' and they said "you had better come in straight away for an examination" . The nurse took one look at my urine sample and said "you better go to Lancaster and get some blood tests - I'll phone ahead!" - so off to A&E at Lancaster - they were busy (they always are) so my wife left me there and would return when I knew what was happening . They kept me in - over the next three days I had a CT scan and an MRI scan, antibiotic drips, various and numerous blood tests and was released on Monday afternoon with take home antibiotics . Will need my Bile duct flushing out (outpatient job - down the throat thing - think 'Alien' ) (but without Sigourney Weaver) and probably my Gall Bladder removing at some point . Still feeling a bit ropey but it's nice to be out in the fresh air again . As always the NHS came up trumps - totally professional as always , cheerful at all times  the staff looked after everyone very well indeed - a 'National Treasure' that MUST be protected against the interference of slimy self serving  politicians !
Posted by The Good Soldier Svjek at 03:41 25 comments: 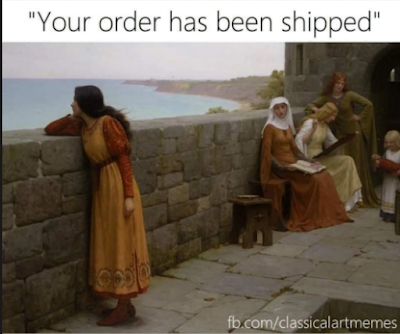 Awaiting an order of Toy Soldiers .... (gleamed from the Internet )
Posted by The Good Soldier Svjek at 22:45 14 comments:

Actione on the Roade to Loxley Barrett (parte the seconde) 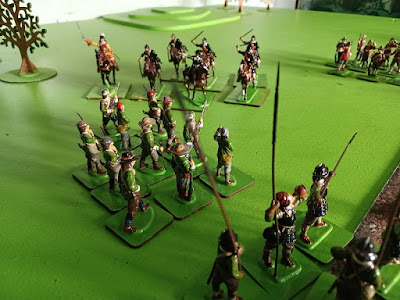 The action is growing hotte ! , Nigel Pargetter leads his Horse against the lefte sleeve of Shote . 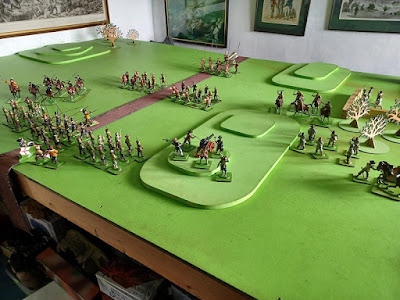 The situation as the battle unfolds , the Royalist Shote advances to support the Horse as the Parliamentary Dragoones open a destructive firre on the righte . 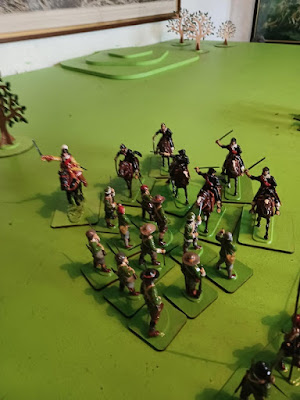 The Cavilier Horse charge in but unfortunately they roll very poorly and it's a draw and they are forced to retire . 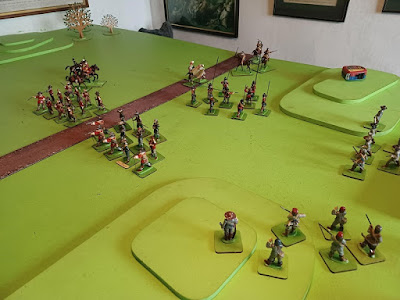 Things start going wrong all at once !  , the 'Oxford' Horse make a bad morale roll (if you roll a double 1 something bad happens ) and are ordered to return to Oxforde at once so leave the Cavilier lefte open. . The Pkemen move across to shore up that flank but are caught in a cross firre from the Dragoones , fail their morale and flee the fielde ! . 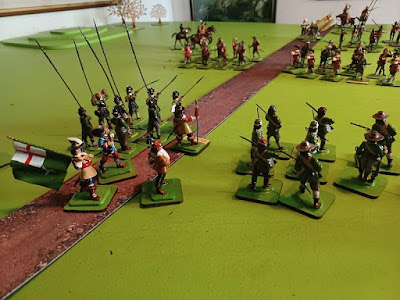 Pargetter's Horse are forced to retire due to firre from the lefte unit of Musketeers , the Royalist Shote exchange firre with the enemy causing some casualties but with their lefte open to the Dragoones Nigel Pargetter is forced to call a general retirement leaving the fielde to Col. Dandby's force . The roade to Loxley Barrett is open and Col. Danby marshals his force to continue his advance . A good game with periods of nothing much happening,  then a dramatic outcome in the end , easy to remember rules , quick and simple - just what you want ! .
Posted by The Good Soldier Svjek at 09:19 14 comments:

Actione on the Roade to Loxley Barrett . 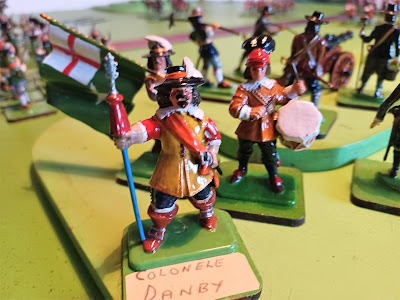 Smarting from his reverse at Roserran in the Vale (Tin Soldiering On: The Bloodye Affraye at Roserran in the Vale (Parte The Second 'the actione growes hotte') (tonystoysoldiers.blogspot.com) Colonele Danby has reformed his forces and set off to level the Royalist fortifications near Loxley Barrett (Tin Soldiering On: 'The Greate Sconce' of Loxley Barrett . (tonystoysoldiers.blogspot.com) , unfortunately the enemy have been warned by a spy and he is met by an opposing force sitting across his route of marche . 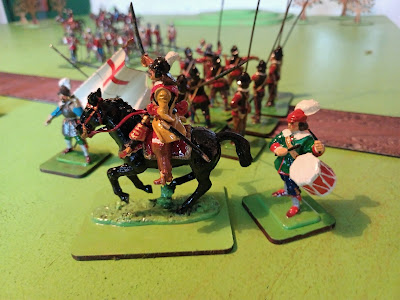 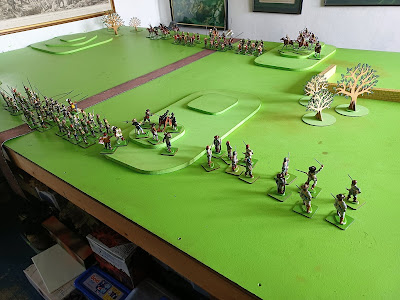 Colonele Danby deployes his force - the Musketeers and Pike in the centre , the Gunne and crew on the ridge and two units of Dragoones on the right . 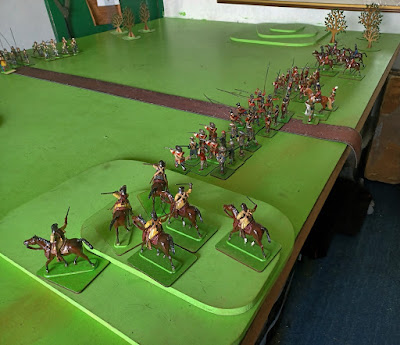 The Royalist force likewise has deployed the Pike and Shoote in the centre , Pargetters Troope of Horse on the right and on the left a Troope of Horse sent by the Kinge from Oxforde to reinforce his influence in Borsetshire . 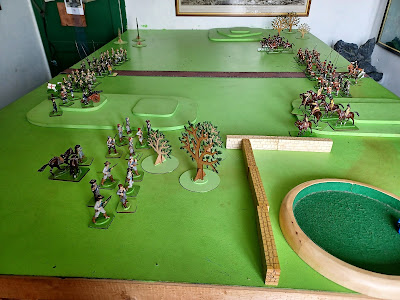 The Actione starts withe the Dragoones moving forward on the right as the Royalist Horse advances on both flanks .(please ignore the dice tray intruding on the scene ) 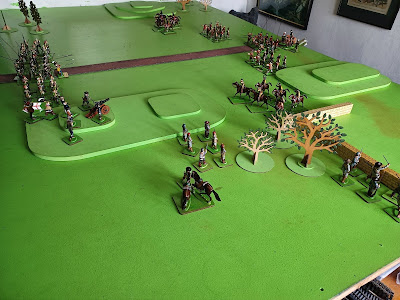 The Royalist Horse continues it's advance as the Dragoones continue their flank movement . The game is being played using 'Pikeman's Lament' rules and an update will follow soon .....
Posted by The Good Soldier Svjek at 13:18 19 comments: