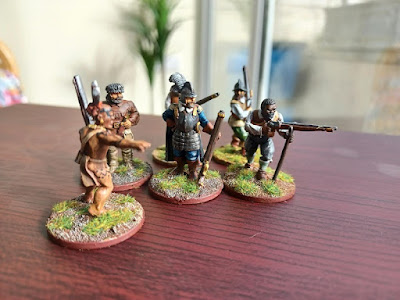 Getting bored with painting 15mm , so I'm off to explore the Great Lakes with Samuel de Champlain . (Crucible Crush 28mm figures)
Posted by The Good Soldier Svjek at 00:37 14 comments:

Other people's figures and decorating . 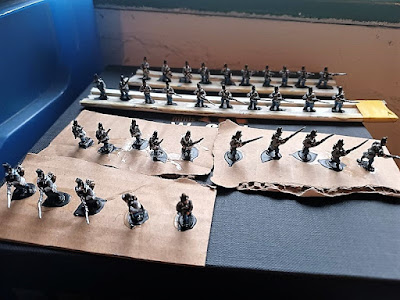 Not a lot of gaming going on here this week , the decorating bug has reared it's head again and we are re-decorating the living room - which is easier than the hall/stairway in someways but harder in others - you are constantly having to move furniture and having decided not to wallpaper again (Huzza !) I am now having to 'improve the wall plaster ready for painting (Boo - Hiss) . I then somewhat rashly took on a painting commission to do about 180 + 15mm Austrian figures for the war of 1866 to help refill my Wargaming Coffers . 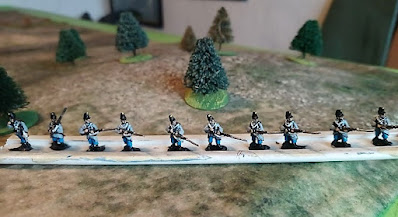 It's ages since I painted any 15mm as I find them to small for my tastes - and a pain to paint , I am using what used to be called (at least by me) the 'black technique' - when the figure is sprayed black and you go over it just painting the highlights and leaving about a third of the figure black to give accentuated shadows . I am progressing well with them as I want to get them done before our upcoming holidays . A combination of the two - decorating and figure painting is keeping me VERY busy at the moment .
Posted by The Good Soldier Svjek at 22:49 6 comments: 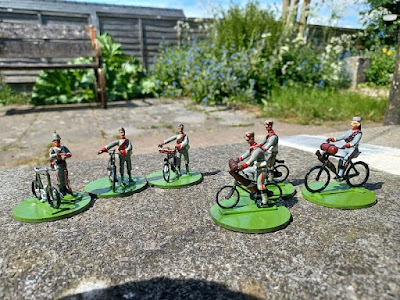 These are a  unit of cyclists from Cycle Volunteer Reserve (C.V.R.) who are to join 'Red Army'.  It has  taken me about five years to collect the suitable figures and give them a new paint job  . You don't see many for sale on EBay so I have had to pick figures up when I've seen them , I'm not sure who they are made by - I suspect at least a couple of manufactures as there are different figure styles . They will provide an essential scouting role for the 'Red Army' 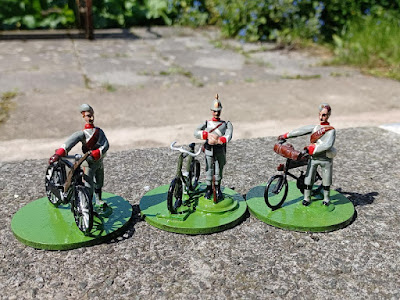 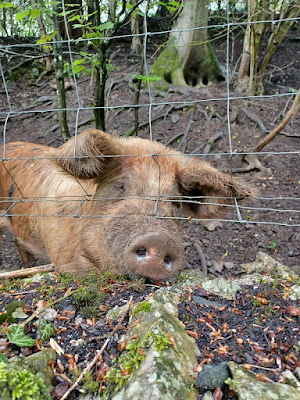 These photos have been on my phone for a while and seeing I'm having a bit of a clean out I thought I would put them on here before I delete them . My mother used to say "Cats are superior , Dogs are inferior and Pigs are our equals" . 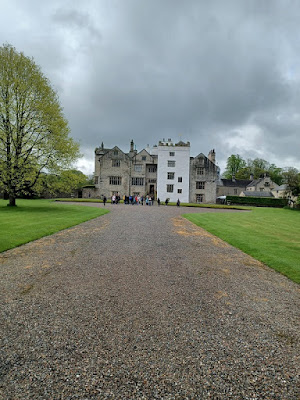 We took the dog for a walk around Levens Park , as we past the Hall my wife said " do you want to call in for a cup of tea at the cafe"  - seeing she volunteered to pay how could I refuse ! . 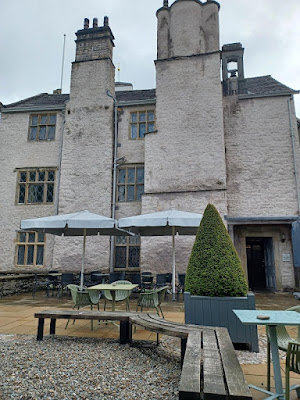 As we had the dog with us we had to sit in the courtyard . The Hall is old originally a medieval Pele tower with lots of Elizabethan (?) bits added . I have been round it many years ago - got round free as I was a Lake District Voluntary Warden at the time and it was a freebie day out , for some reason they have one of Napoleon's saddles (!?) . 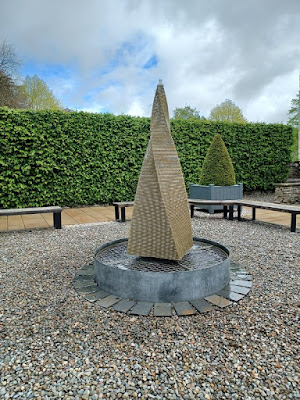 The fountain who's tinkling water had a detrimental effect on my bladder ! - trickling water and a man of a certain age - went to the loo twice ! . 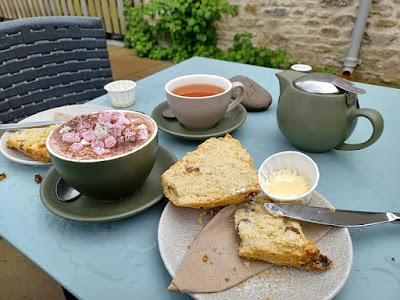 The spread ! (mine is the Earl Grey - the other hellish concoction my wife's) The scones - homemade a plus but NO jam - a big minus - I did enquire but the didn't have any - I was quite put out !!! and things got worse - the b****y dog sneaked up and scoffed the last bit of my scone - I could have cried (there there - chin up now !) 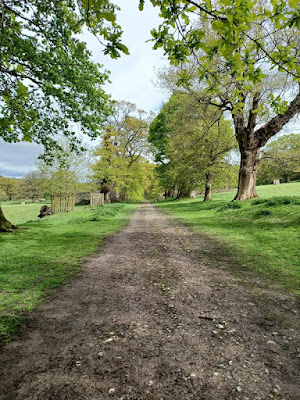 The magnificent avenue of trees which was once the carriage route to the Hall . 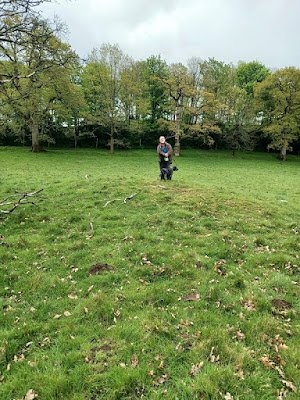 And things got better ! , I managed to locate (with help from Google) an elusive prehistoric Burial cairn I have been looking for , so I got my somewhat sceptical wife to take a photo of me and the dog standing proudly on it ! - being a gal she don't understand the importance of these - as she puts it 'mounds in the grass' . I must say it doesn't appear as impressive as I thought it . It was as 'Wallace' would say - A grand day out !
Posted by The Good Soldier Svjek at 12:57 14 comments: 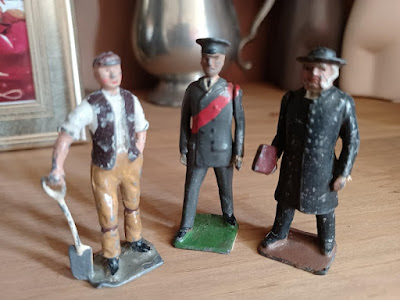 I can at times get a bit sentimental about some of the old figures I buy second hand off Ebay , I wonder who owned them what gaming history they have , where they precious and well played with or languished in a box and just sold on without thought ? . I bought these 3 figures mainly for the roadworker with the shovel who reminded me of an old chap I knew when I started work on Westmorland County Council Roads & Bridges Dept. in 1970 .The Priest will be appearing on the tabletop as Father Brown, an amateur sleuth . The middle chap I had no plans for - I think he's a Britains Zoo Keeper which somebody has painted a red sash over his shoulder . 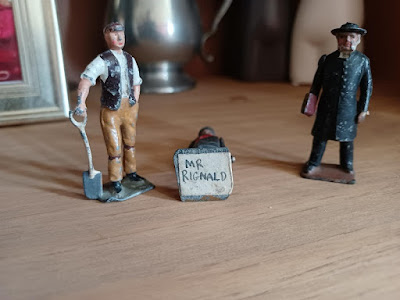 On further investigation I found he has a sticker applied to his base with 'Mr Rignald' written on it in  ink !? - I wonder who bothered to do this and what was the significance of it and why the added red sash  - who was Mr Rignald ????
Posted by The Good Soldier Svjek at 11:42 12 comments: 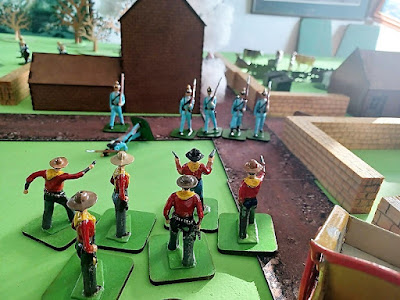 The 'Red  Army' Legion of Frontiersmen open fire on the Bavarians causing casualties whilst the Police Station smolders in background . 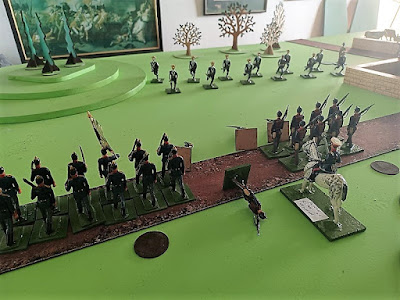 The 'Blue Army' reinforcements manage to rally, form up and open an inaccurate fire on the sailors of the Pinafore who their mission completed retire back towards the woods . 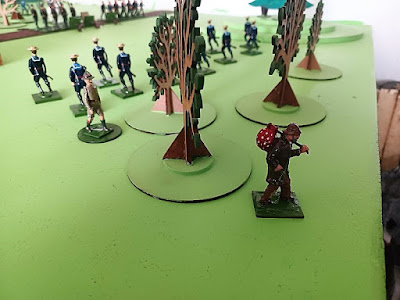 Baden Powell manages to scale the Police Station wall and heads for the woods and safety . Meanwhile the mysterious tramp quietly disappears amongst the trees - who is he ? - his identity remains a mystery . Well the game when very well for the 'Red Army' they had a run of cards which enabled swift movement and some excellent shooting , 'Blue Army' however never got started and failed some morale tests badly and what of Von Rottenburg ? is he still alive ? , time will tell. 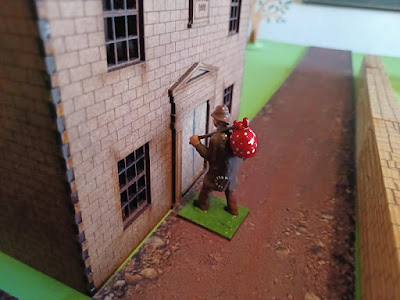 The old Tramp approaches the Police Station door and puts down his bundle - which is ticking ominously!! 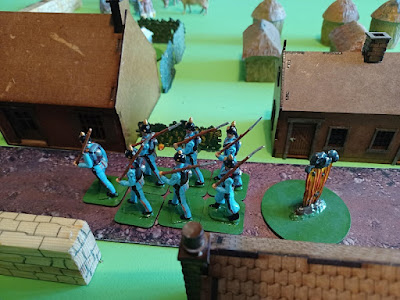 All of a sudden all hell breaks loose ! , a shell lands near Sergeant Shultz's patrol ! 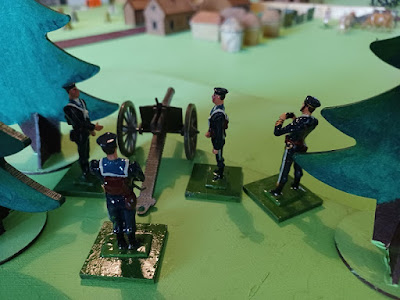 Hidden on the hillside a masked Naval gun from the 'Red Army' HMS Pinafore . 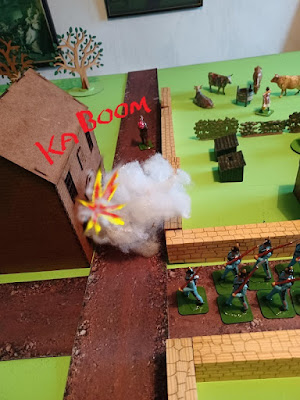 Suddenly there is another explosion which demolishes the front door of the Police Station ! - I rolled a dice for the ignition of the 'infernal device' - on a 1 it explodes prematurely , 2-3 on the next red card drawn. 4-5 on the following red card , on a 6 it doesn't explode at all . I rolled a 2 ! KABOOM ! 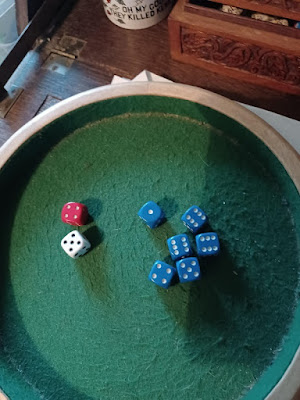 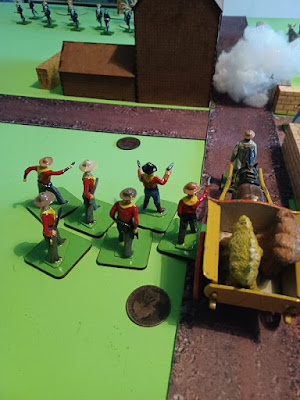 On cue a unit of the Legion of Frontiersmen debus from the haycart - 'Red Army' plan is going like clockwork - aided by a run of red cards . 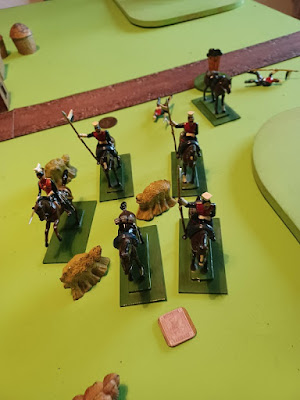 'Blue Army' gets a unit of Uhlans as reinforcements ! - but are immediately hit by a shell from the Naval gun and fail their moral test ! - Oh dear ! 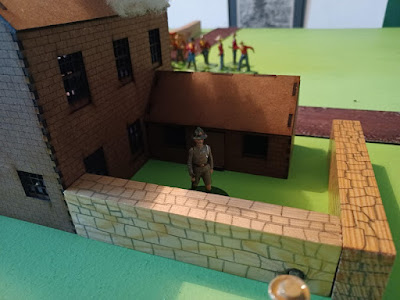