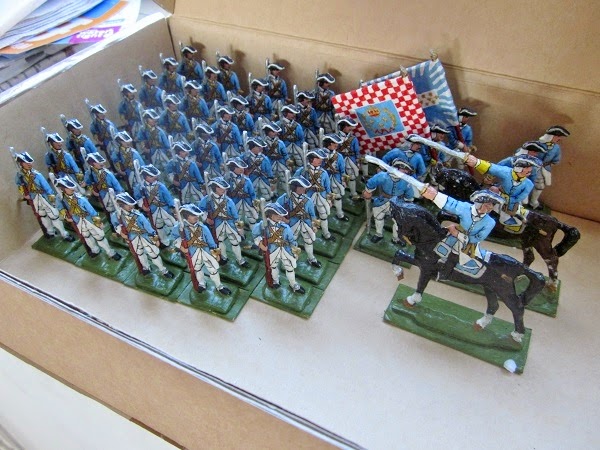 Sometimes you just get lucky ! - I noticed that there were some painted 42mm Prince August SYW-ish figures on EBay , I tend not to pursue painted figures on auction sites as they can go for silly money and you sometimes cannot tell from the photos how well they are painted anyway . However nobody seemed to be interested in them and placing one bid at 50p greater than the asking price - much to my surprise I won them at about 50p a figure !. 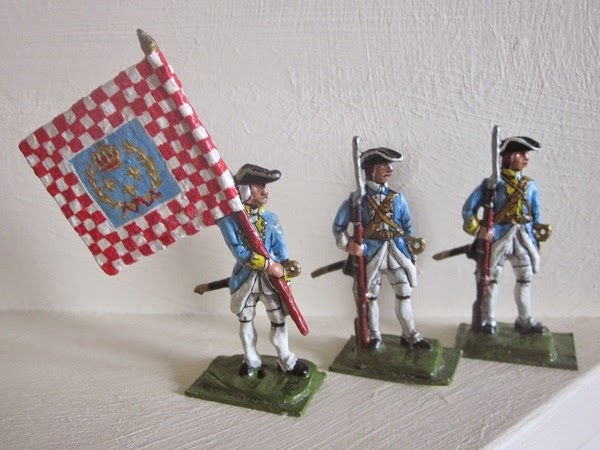 They arrived very promptly this morning and having taken the dog for a walk I opened them and was overwhelmed by the quality of the painting - somebody has taken great pains with these . The are Bavarian troops from the regiments 'Kurprinz' and 'Minucci' ( I think ?) I was originally going to repaint the facing colours to form one regiment , but the painting is so good that it would be sacrilege touching them . So I will be forming them into a single 'Battalion De Marche' my SYW armies being rather lax on true history and more SYW-ish. 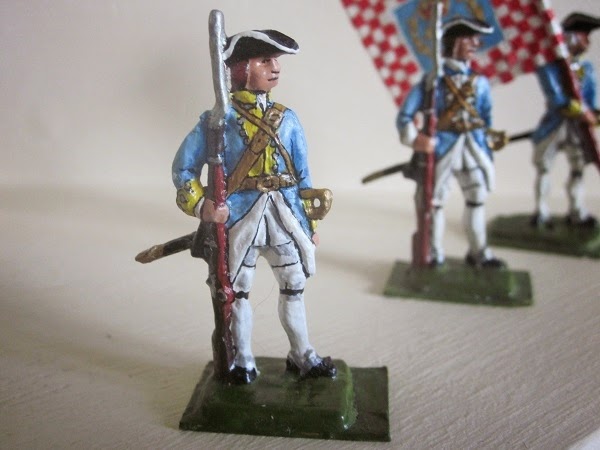 Somebody has used a fine graphic pen to out line the colours and the standard of painting is far higher than mine - beautiful ! . They will need re-basing to match my other figures , the odd touch up and a high gloss varnish . When you purchase figures like this I always wonder about their history and who painted them and hope I can do them justice on the gaming table . I will show more photos when they get re-based 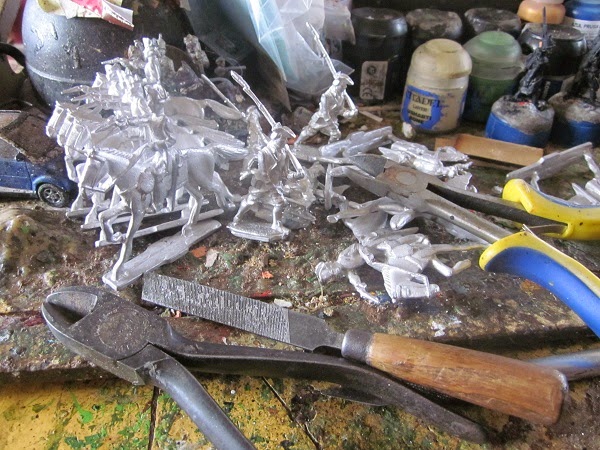 I've braved the cold weather to visit our outbuilding to do some casting - the first time this year and the Gods of casting smiled on me - things went well with hardly any miscasts . I have now retired to the fireside with a mug of tea and some biscuits to clean the castings up and glue them to bases ready for spraying . 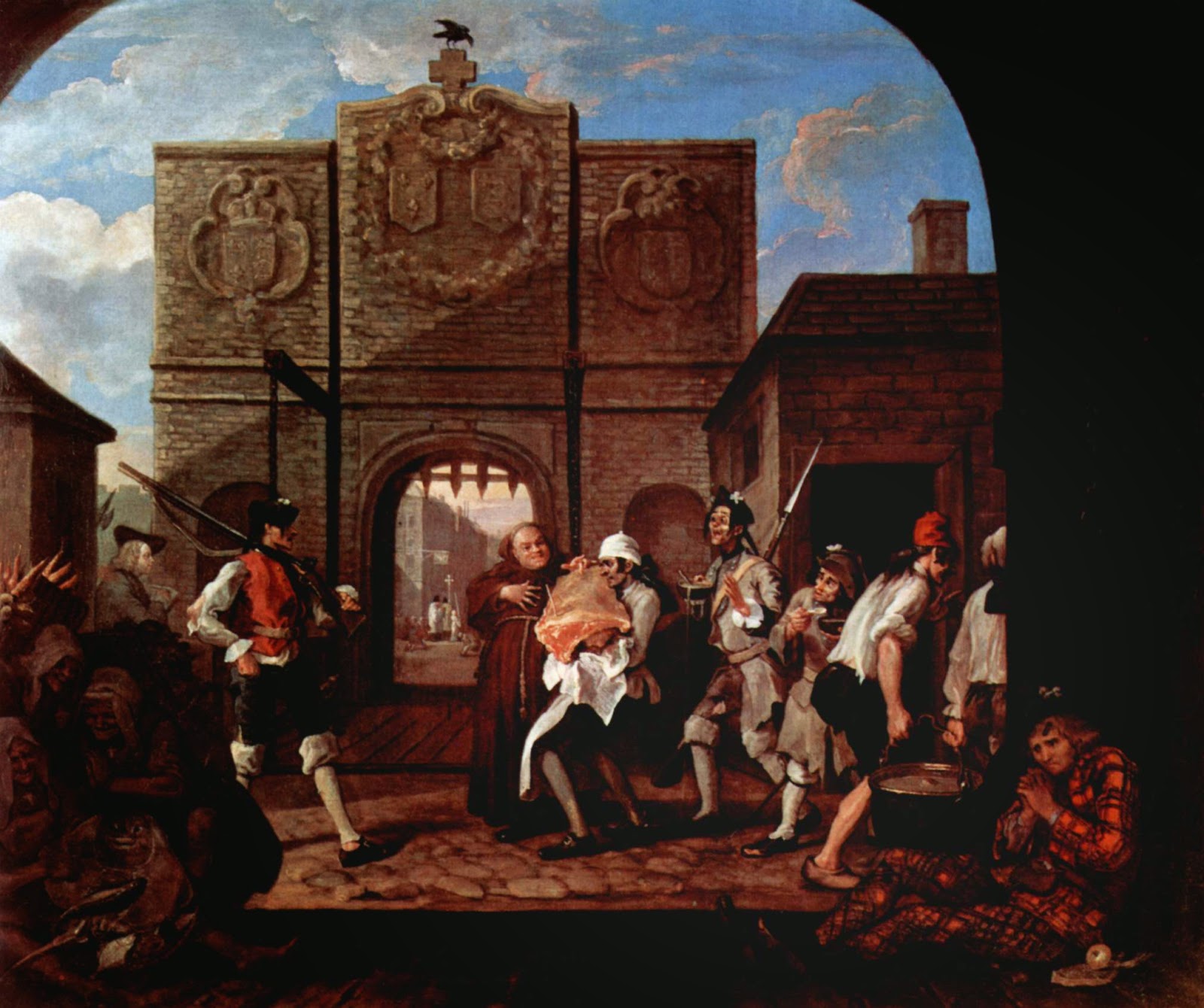 Been feeling a bit under the weather of late and almost unheard of- rather off my food !. This has also manifested itself in  an unproductive period  gaming wise. So when I awoke this morning feeling a bit better, we decided to go to our local pub for Sunday lunch . Above Hogarth's 'The Roast Beef of Old England' - a print I've always liked . 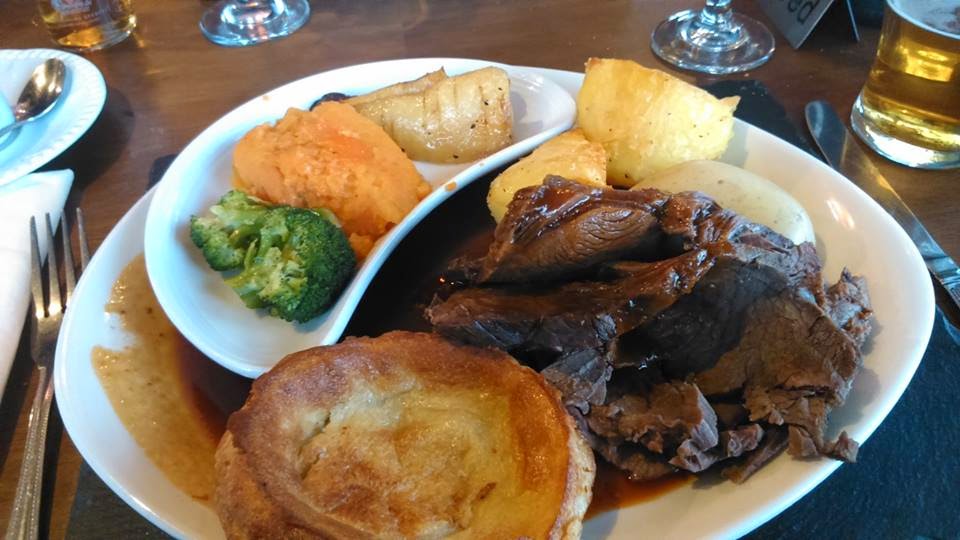 They do a VERY  good roast beef lunch ! 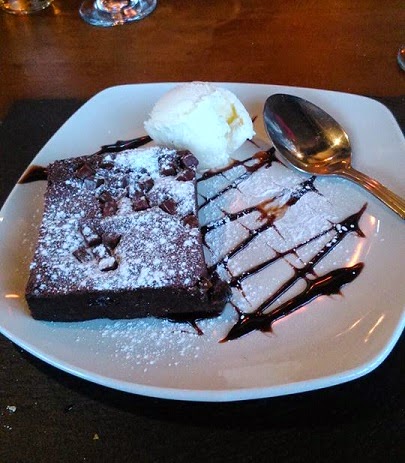 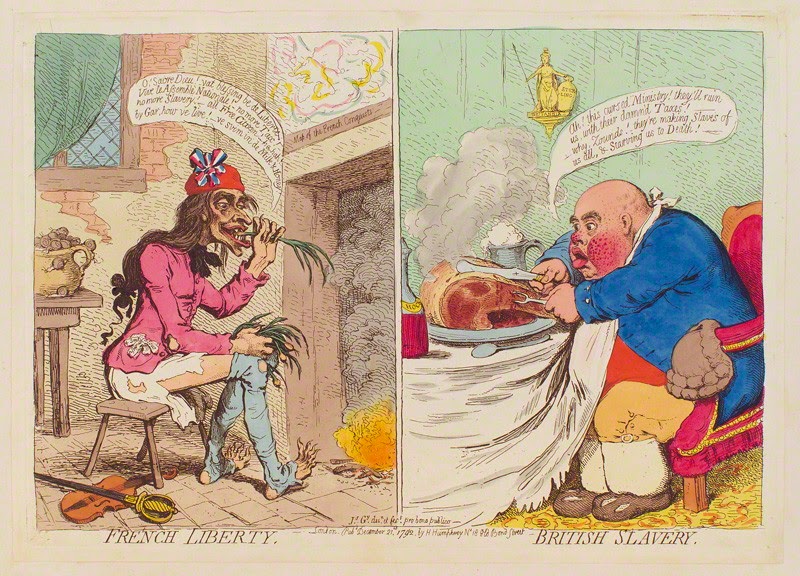 The author at his meal - the one on the right it goes without saying - only with slightly more hair ! . Having fed the inner man I've spray under coated the next unit of Papal Infantry and cleaned up some Indian Sepoy's ready for painting - so having taken the dog for a walk I've something to get on with - MUST be feeling better !.

Towards The End Of A Project. 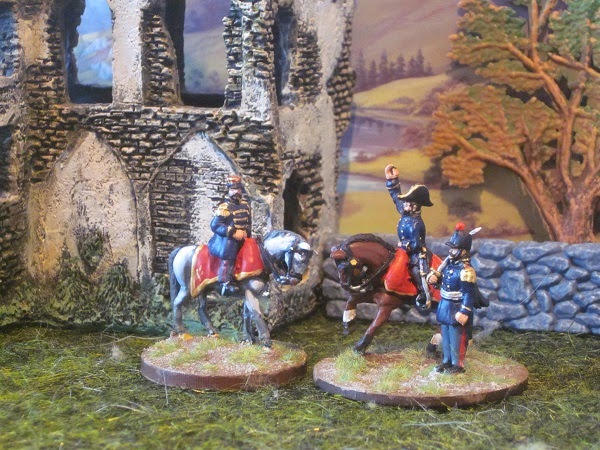 I can always tell when I'm coming to the end of an army ( does one ever truly finish off an army ? ) - I start painting Generals and Staff . Here we see the Papal C in C General De La Moriciere and his second in command General De Pimodan . My C in C are on a larger base with an accompanying figure to distinguish them from the ordinary sub - generals . 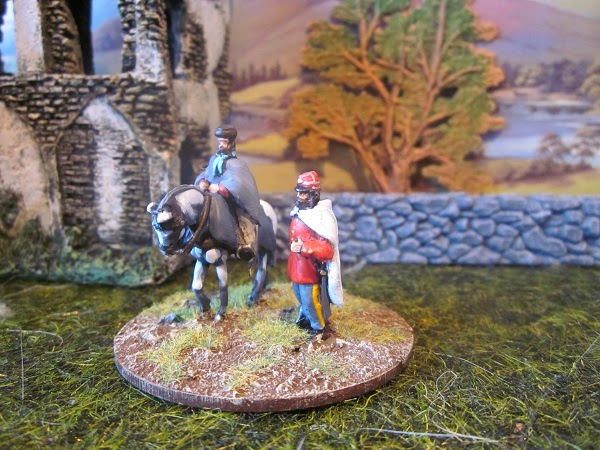 I have re-based Garibaldi to fit in with this system . 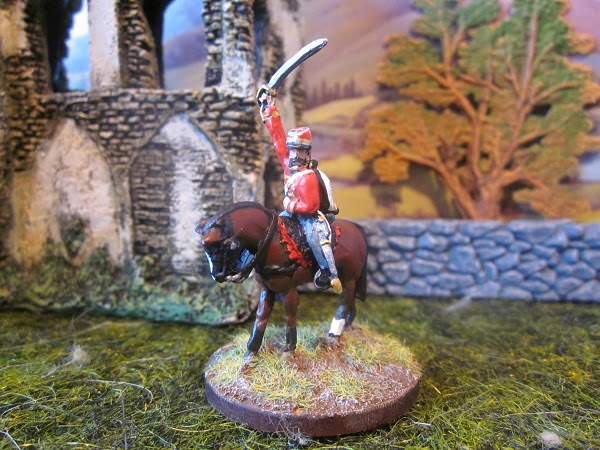 I've painted up another of Garibaldi's commanders - this one is Nino Bixio and is a converted Irregular Hussar figure with an added Pelisse from 'Greenstuff' . 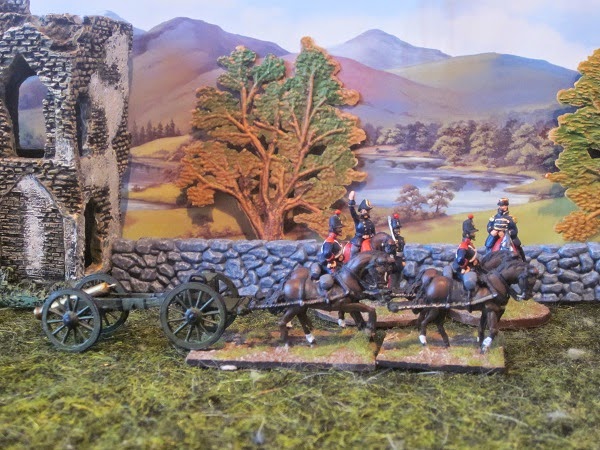 Another sign of a completed army is the painting of limbers for the artillery - I hate putting together and painting limbers ! - but when finished I do like having them and think they look good on the table top .

P.S just remembered that I've not quite finished my Papal Army as I've got another Line Infantry unit to do ! .

An Oldy But A Goody ! Found this in an a old photo file whilst tidying up my computer - I'm sure everyone's seen it before , but I think it's so good it will bear repeating !. 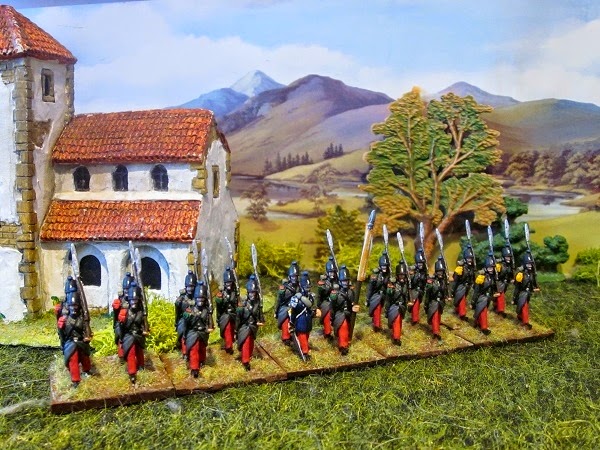 There has been a slight delay in posting this update due to having to change Internet provider , after about 8 years Virgin don't seem interested with us any more because we don't have access to fibre optic broad band ! - however normal service has resumed after a ( happily) pain free transfer to Plusnet. Above is my first of three Papal Infantry Line battalions . 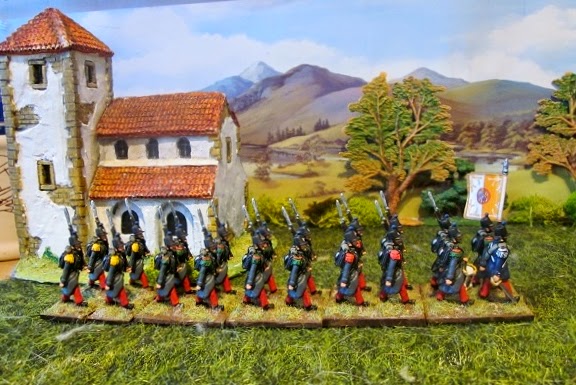 The flank companies had different coloured epaulets - red for the Grenadiers and yellow for the Voltigeurs . I've made a start on the second battalion and some Staff figures to complete the army . 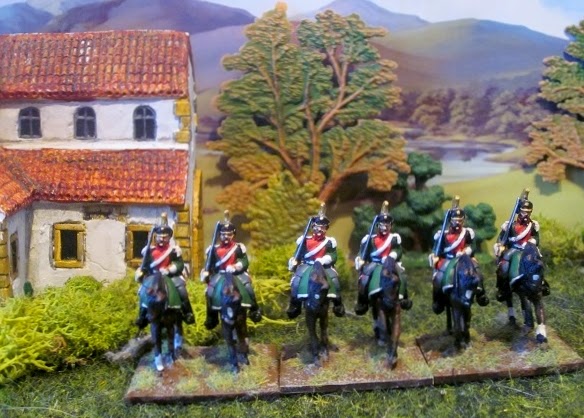 I've also got done a Squadron of Papal Dragoons , the great thing about this period is the general lack of cavalry deployed by the combatants and then mostly only in Squadrons attached to Infantry Brigades , so this means not much cavalry to paint up !. 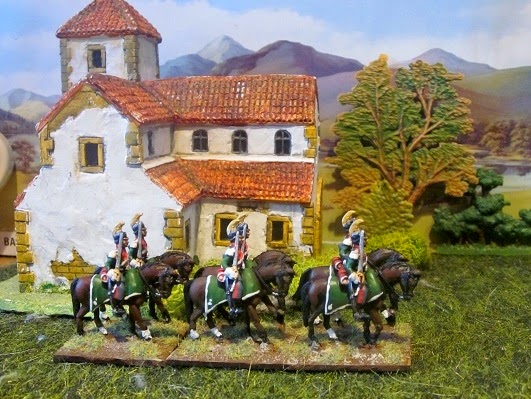 It's a bit sad really because they are very colourful . All the figures are Irregular 25mm . When I've finished this army I plan to build a Piedmontese army to fight them - but I have to finish off the mammoth re-basing of my Napoleonics first .

The Mother Of All Re-Basing. 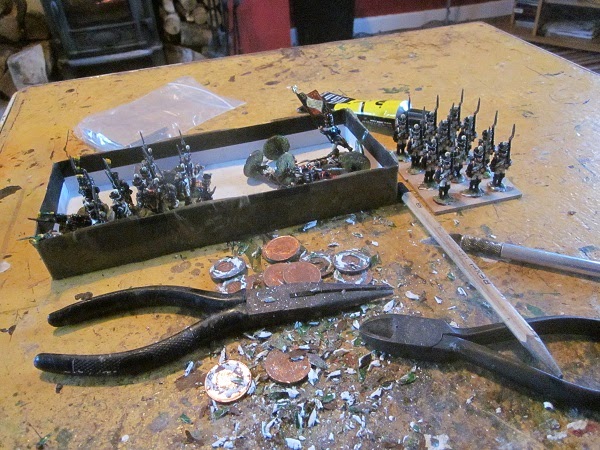 If I lived in Victorian times my wife could probably have me certified and locked away in a private asylum somewhere!. Flushed with the the success of the re basing of my Indian Mutiny figures I have decided to re base my entire Napoleonic collection ! - that's approximately 600 figures , each one based on a penny ( originally this period was going to be Old School ) . I've made a start and have got 5 Battalions done ( each of 36 figures) , more 'Basetex' and static grass have been ordered - but I have managed to stick the modelling knife into my thumb twice (with accompanying bad language and dance around the room) and think I'm getting repetitive strain injury in my right hand - I've said it before - 'I must be mad !'. 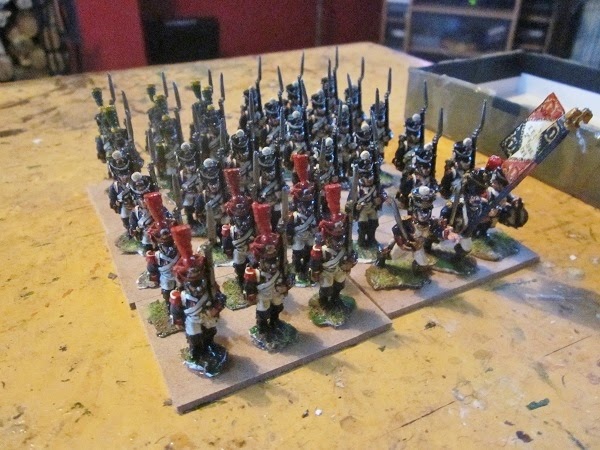 Necessity being the mother of invention ! - I've found that putting the penny which the figure is on  in the vice and tapping it sharply with a small hammer parts the figures with it quickly and easily - without the risk of bloodshed ! - above another regiment ready for 'Basetexing'.