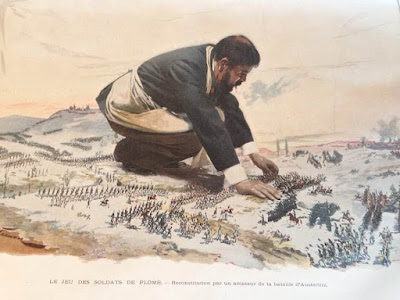 I came across this on 'Warfare in the Age of Steam' blog (Warfare in the Age of Steam: 1899 Illustration by Frederick de Haenen, called "Le Jeu Des Soldats De Plomb. - Reconstitution par un amateur de la bataille d'Austerlitz." (1815-1918.blogspot.com). Whilst looking at it my wife said "Is that a photo of you and your little men ?"- it does bear a resemblance to me - when my beard and hair were darker and less grey .
Posted by The Good Soldier Svjek at 05:57 6 comments:

- "and so I offer my game,for a particular as well as a general end ;and let us put this prancing monarch and that silly scare-monger, and these excitable 'patriots' and those adventurers,and all the practitioners of Welt Politik, into one vast Temple of War, with cork carpets everywhere, and plenty of little trees and little houses to knock down, and cities and fortresses, and unlimited soldiers-tons; cellars- full - and let them lead their own lives there away from us " H.G. Wells Little Wars 1913

There's always somebody that has to go one better ! 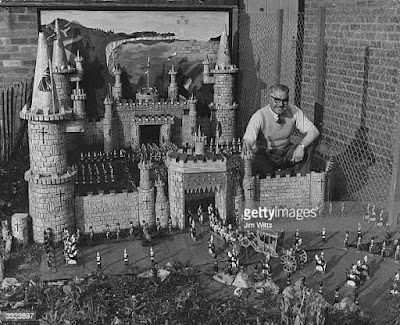 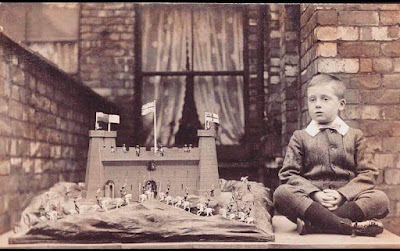 A rather smart Victorian/Edwardian boy with a  very nice fort and collection of Britains (?) figures , freshly reaped from Facebook . I must stress it's not a photo of my good self as a child, although I do come from when the world was in black and white .
Posted by The Good Soldier Svjek at 14:01 10 comments:

A gift from the New World . 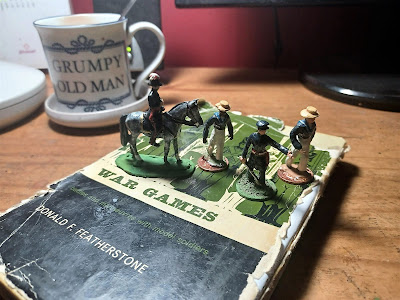 In a previous post I mentioned I have got a book with Donald Featherstones autograph (.: The signature of the great man himself . (tonystoysoldiers.blogspot.com) and Ros Macfarlane ( of Battle Game of the Month (gameofmonth.blogspot.com) fame) mentioned he had a signed copy of Featherstone's 'Wargames' which he was happy to pass on to me . Taking up this kind offer the book has arrived complete with a traveling escort of two Sailors and Officer and no lesser personage than Colonel MacDuff . 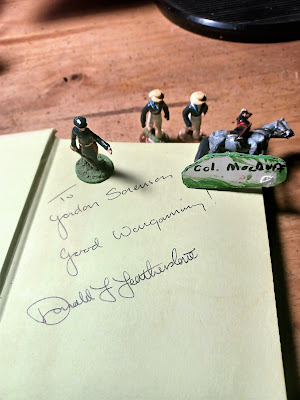 The great mans signature - 'To Gordon Saeuson(?) Good Wargaming!'. The famed Colonel MacDuff and his escort having passed their Covid tests are reputed to be seeking employment in the armies of the new Republic of Helenyka and may be appearing on the tabletop soon . Once more many thanks for the kind gift Ross .
Posted by The Good Soldier Svjek at 08:20 10 comments:

Well there is nothing much to report this week , we are having various renovations done in the house and although I'm not directly involved I'm busy lifting and carrying , tidying up and now doing a bit of decorating , so very little on the wargaming front . 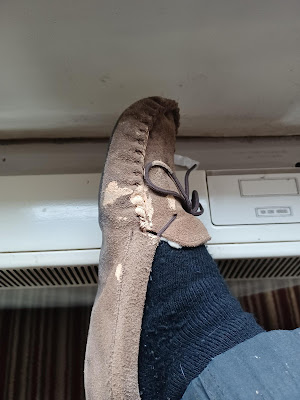 My decorating skills and methods have more to do with 'The Chuckle Brothers' or 'Laurel and Hardy' than Michelangelo - as illustrated here - paint all over my slippers and a pair of trousers (which have now been designated as 'my painting trousers') . My wife took over today so I took the dog out for a long walk , I arrived back to a burst of bad language from the decorating area as she managed to get gloss white paint in her hair (my wife maintains she didn't swear before meeting me !?) (I beg to differ) . 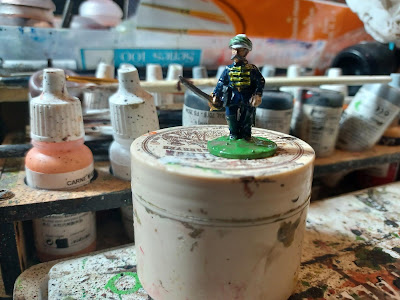 I was sorting out my O.S. FPW figures the other day (re-boxing them) and found I had only 19 Franc Tireurs - strange !? I could have sworn there where 20 ? , I hunted high and low , but I'll be damned if I can find the 20th one (if he ever existed?) - so I hunted through my bits box and found this figure , he's an officer of the Afghan regulars (a Foundry 25mm figure) , as the Franc-Tireurs seemed to wear a mixture of civilian and exotic military uniforms I painted him up as above and he will join the French ranks . I will now probably find the missing figure now !