Gazing at my Wargaming Navel.

It that time of year when I start thinking about were I'm going with my hobby in the forthcoming year -  then totally forget the pronouncements I've made and go off on a completely different tangent !. But I find it interesting to look back and smile wryly to myself . Last year I said "no new projects!" - well that lasted about five minutes ! but I did finish off my 28mm Napoleonic collection . As I get older I don't like learning new rule sets - so I plan to stick to the ones I like - and can remember (TSATF , Black Powder, SOBAH etc ). I play most of my games solo and the games have to 'flow' so to get them finished and not sputter to a halt when boredom sets in half way through . We are all familiar with the term 'page turners' when talking about books (and in my case these tend not to be 'high literature' category) and I find some wargames are 'page turners' - when you can't wait to start the next move and if there's a break in the play you can remember were you were and pick up the flow without a problem . Amongst my top 'Page Turner Wargaming Rules' are TSATF , SOBAH and anything Old School and because of this I find myself playing these rules more and more whilst others fall by the wayside .So I'll end my ramblings with a few photos of my latest 'Page Turner' - Featherstone WW2 . 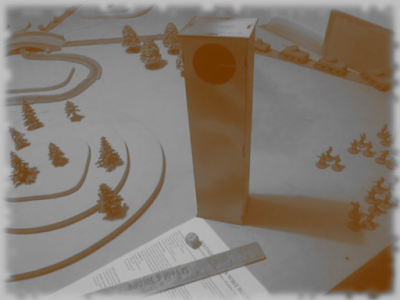 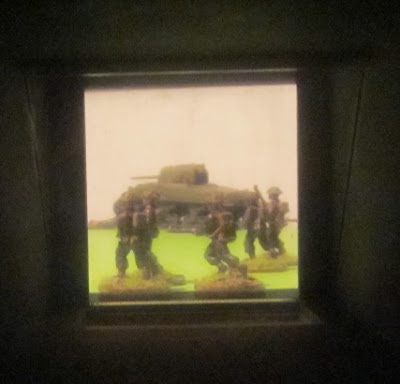 The view through it . 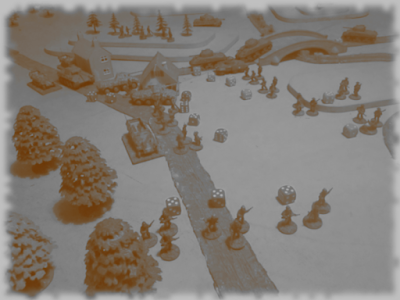 The action hots up - the dice with each unit denotes the order of activation . 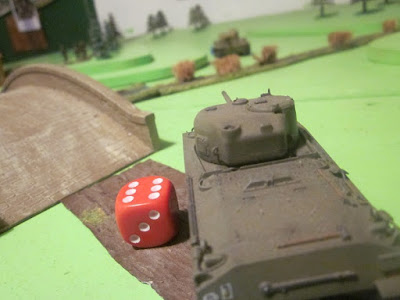 A Sherman gets the drop on a distant Tiger tank . Sadly my camera batteries died half way through the game . The rules were very entertaining and quick - 'Page Turners' ! 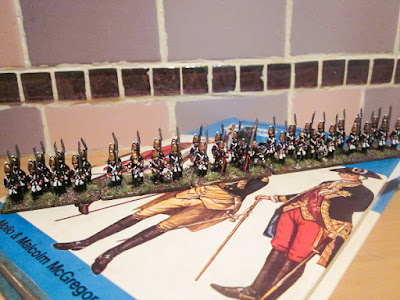 I've got my first two units of the Hessian contingent for my British AWI army finished , I always find it a bit daunting photographing small scale figures . Here are the Grenadier Regt. Von Rall. 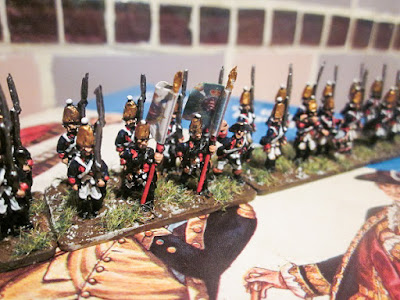 This unit was unique in that the entire unit wore Grenadier mitres , just the sort of thing that attracts wargamers to paint them . Unfortunately the historical regiment was captured at the disastrous  Battle of Trenton. 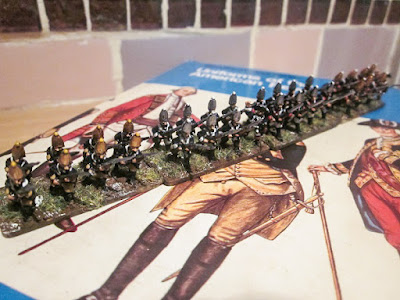 The next is a composite battalion comprising the grenadier companies of the Hessian Regts. Prince Carl, Von Donop, Von Trumbach and Wutginau . 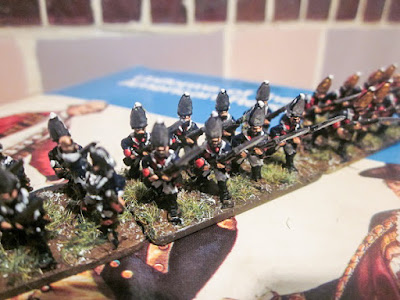 That's a total of seventy two figures , which once I got into a rhythm of painting them didn't take to long . I'm ready to go back to painting something a bit larger now though !.

Email ThisBlogThis!Share to TwitterShare to FacebookShare to Pinterest
Labels: AWI

I've been reading Donald Featherstones 'Tackle Model Soldiers This Way' which is about model soldiers and the painting ,casting and the research of them , but it does have three very basic sets of wargaming rules in it . The WW2 ones rather took my fancy so I've copied the rules down as a play sheet , VERY Old School in their starkness - but it does take me back to the days of plastic Airfix tanks and unpainted figures - I have some 1/72nd scale figures somewhere so I'm going to dig them out and give it a go !. 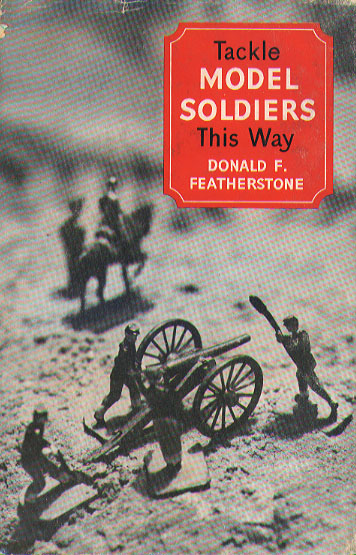 From One Extreme To The Other. 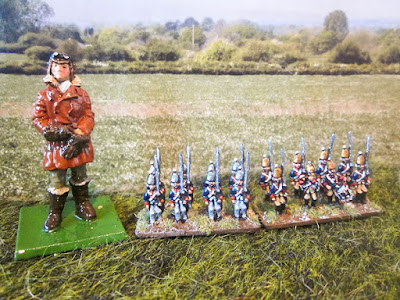 This weekend I ended up painting from both ends of the figure scales . On the left a 54mm figure for my collection of WW1 pilots purchased off EBay and painted  in the 'Toy Soldier' style and on the right 12mm Hessian Grenadiers from 'Kallistra' for my AWI project . 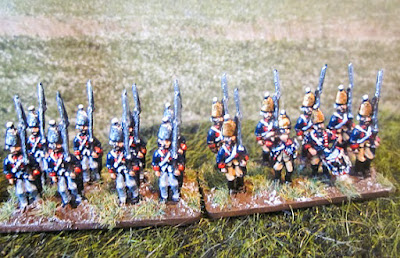 I haven't done much with my 12mm American War of Independence recently , but 'Kallistra' have just added Hessians to their range and I had been awaiting these to expand my British forces . You shouldn't really photograph these tiny figures so close as I think they are best viewed 'en masse ' and I will post more photos when I get a battalion finished .

Email ThisBlogThis!Share to TwitterShare to FacebookShare to Pinterest
Labels: AWI, Others

And Now For Something Completely Different (2) 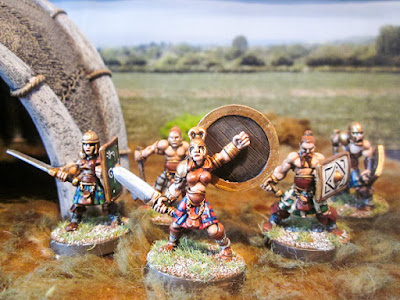 Still painting 28mm Fantasy figures and really enjoying the difference , here we have some Gael Warriors lead by a Shield Maiden (as with ALL female models she is very well endowed - in fact if she's not careful she'll have somebodies eye with them !) 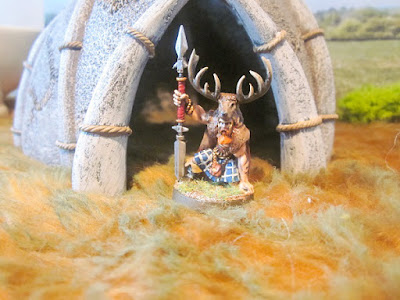 A heroic character Herne Lord of the Hunt . 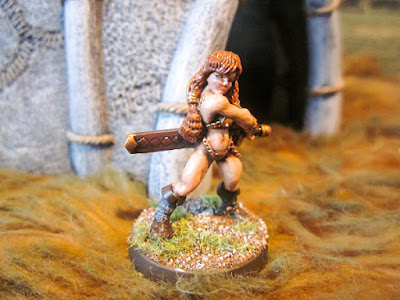 Galea a female Champion - yet another young lady who doesn't seem to feel the cold . 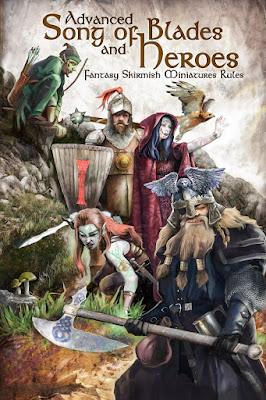 I have just received a copy of the new SOBAH rules , so I hope to get to use some of my newly painted figures on the tabletop.

And Now For Something Completely Different ! 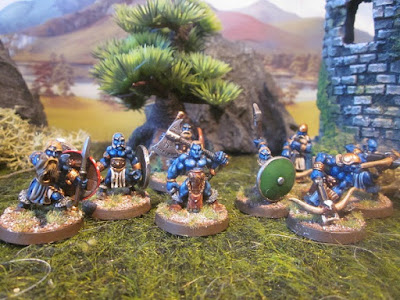 I've been painting historical 15mm for the last few weeks and having completed my assignment I thought I needed a complete change in painting challenge . Sorting through my 'boxes of shame' (my unpainted figures) I came across these figures - I had to sit down and think when and why I'd bought them ? .Years ago I used to help 'S' with his wargaming scenic stall at shows (S&A Scenics) and did about 10 a year , this exposed me to the temptation of buying a lot more figures than I do now . There was a fantasy wargame called 'Celtos' set in a mythical earth - the rules were a bit bland (?) and disappeared without really taking off , the figures however were rather nice in a sort of 'Conan' cartoony way and I picked up quite a few when they where being sold off cheap with the demise of the rules and they have lain in a box under my table till now !. 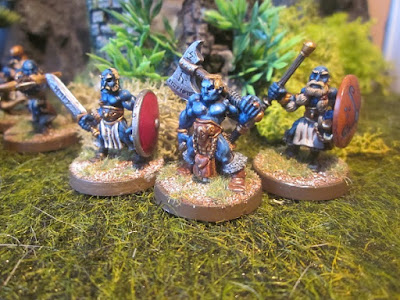 One of the races were Dwarves from the Far North who raided everybody else and were coloured blue (?!) (cos of the cold ?) , I started painting them a more natural colour - but wasn't happy with it - it is meant to be fantasy after all - so went with the original 'Celtos' colour scheme . Here is Kay-Finn the White Axe and his bodyguard . 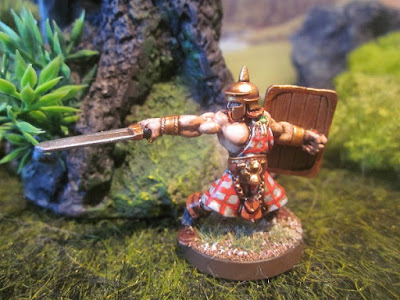 I also did a sample human figure - one of the Gael, a sort of Gallic/Scots/ Irish race , here is Culann a Gael Champion , a very dramatic figure indeed ! 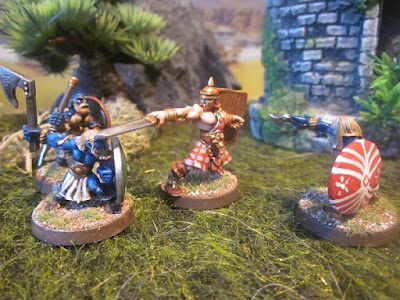 He is ambushed by Dwarves ! . I'm not sure which rules to use yet , but am considering 'Songs Of Blades And Heroes' . 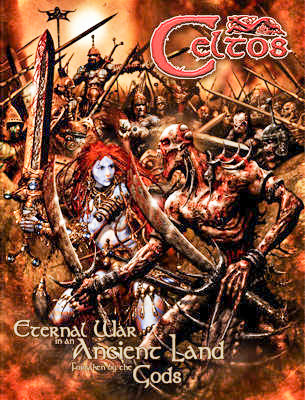 Since I started doing these figures I have found out that the rules and figures are available once again from http://www.brigademodels.co.uk/ , I'm enjoying painting these figures and will post more photos soon .

A Skulking Way of War 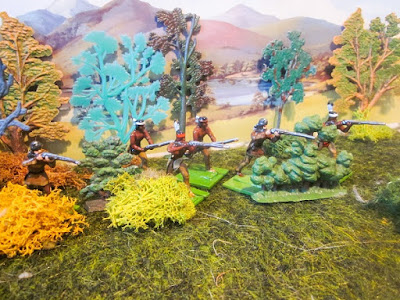 It seems to have taken forever to get these figures painted and I was planning to photograph them in the garden , but winter seems to have arrived damply so here they are indoors. 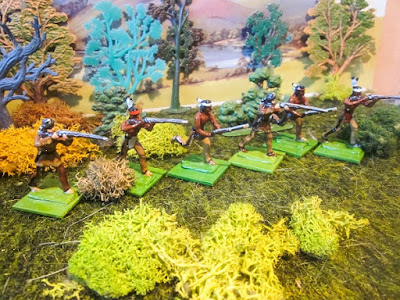 The Indians are maybe a little too 'red', but I tried a more moderate colour which didn't look right. 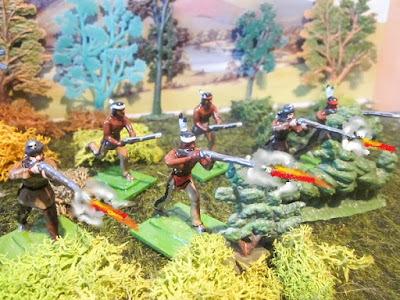 I'm going to cast up some more of these figures soon to get a usable force for the table top. Here they open fire (aided by 'photo shop') from ambush .