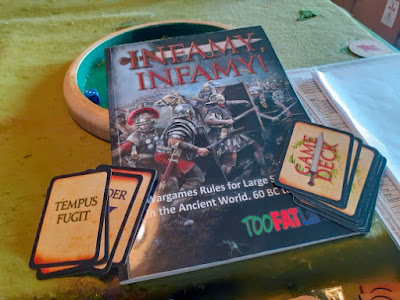 I'm a big fan of 'Sharp Practise'  which is a large skirmish set of rules , I've used these for several years for my Texan War of Independence and also for the ACW very successfully . So when I heard that they were bringing out an Ancient version of these I was intrigued and decided to get a copy . The rules are very well presented with a high production value and a nice set of cards to play the game . It's sort of 'Son of Sharp Practise' but of course with more emphasis on hand to hand combat . It helps to have already played SP as this helps you get your head around the rules which are not in themselves difficult but approach things from a different point of view unlike a lot of rules. The units are moved/fight using leaders that are activated with the card deck , your forces morale drops when bad things happen and this makes it harder to do things with your force . It is scenario driven and you win by accomplishing  the task allotted to you and your force , unusually the barbarians come onto the table from ambush points set out in terrain features on the tabletop rather than a table edge which can be very unnerving  for the Roman player . I've played a couple of test games to try out the rules and find them very entertaining , the 'Too Fat Lardies' do a series of videos on 'You Tube' to teach the rules  . I already have quite a number of figures painted up for SPQR so I can start playing full games with the addition of only a few figures . I will do a further report on the game next week . 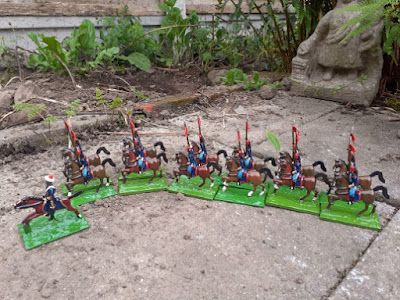 Having got the final 6 figures painted and glossed, I took advantage of the temporary  absence of cats and dog to photograph the completed force of cavalry in the back garden . 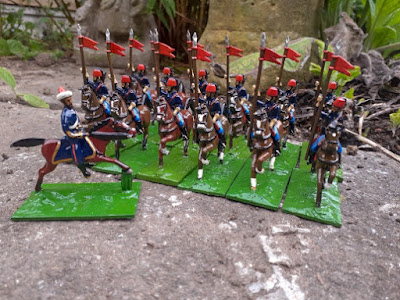 The Lancers of the Sublime Porte , the figures are of course Irregular 40mm and the mounted officer is from their Deutsch Homage range . This painting session has got me itching to get them on the table for a rousing game of 'A Gentleman's War' . 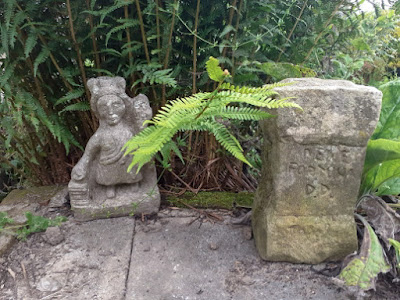 On a side note this corner of the back garden is referred to as the 'Roman Corner' (well only by me actually) . The statue is in fact a resin reproduction purchased many years ago from Carlisle museum and weathered up nicely outside , the alter is something I carved from a block of sandstone whilst at work when I should have probably been doing something more productive work wise for the (ungrateful) public .

A return to the shiny . 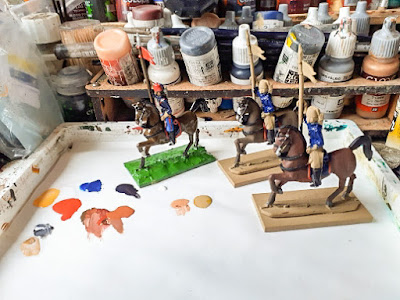 I just rescued the last six mounted Lancers for my 40mm Army of the Sublime Porte from the 'Draw of Shame' where they have lain undercoated but untouched since the start of the lock down , overcome with guilt I'm going to get these done this week as they are the final unit for this army (well for the time being) . Here are the first two on my wet palette with an already paint comrade from a previous batch as a painting guide . 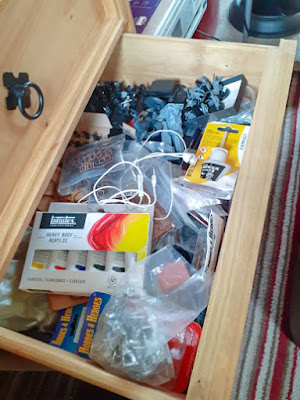 The 'Draw of Shame' , believe it or not I do know were things things are in here , but being next to the computer and my painting station it does accumulate things ! .

Another load of old Gauls 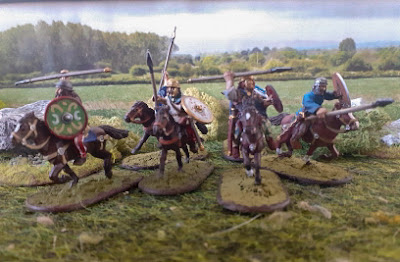 These are the next lot of units I've got done , again they are Warlord 28mm resin figures . These are Gallic cavalry . Evidently 'Blogger' now doesn't enlarge the photos when you click on them - guess that's progress ??? 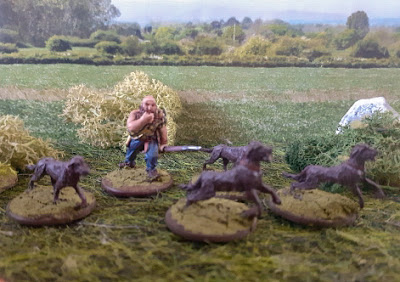 No barbarian horde would be complete without war dogs , he seems to be whistling of his hounds - but like mine they are taking no notice ! - we have a Spaniel rather than a war dog I hasten to add ! . 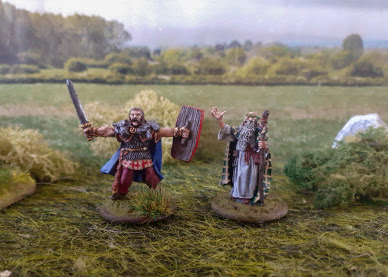 Here is my new force leader with his attendant Druid . 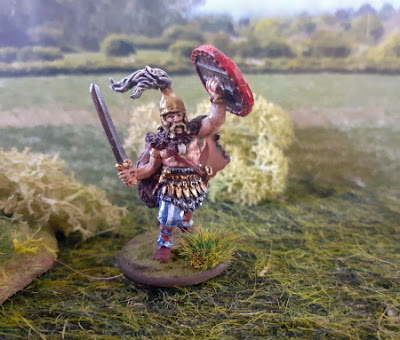 Another Gallic hero . This completes my barbarian force for the moment , I've got some more Romans done but being Legionaries they are a bit 'samey' 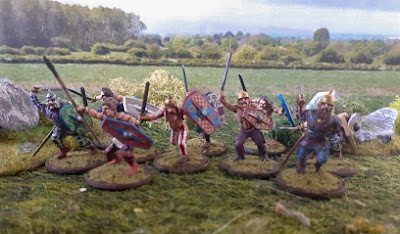 Been busy gluing up and painting more Gauls for my SPQR project , I must admit I like putting together plastic figures - not everyone's idea of fun but I used to make a lot of plastic kits in my childhood and so it's a form of regression perhaps . These are Warlord 28mm plastics , think I've cracked the shield transfers - trim them back to the actual design and cut out the shield boss using a scalpel . 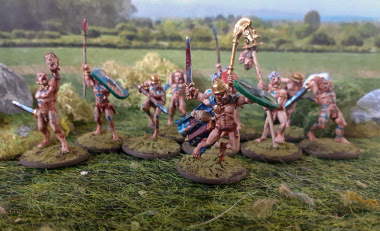 Men with no clothes on ! , as somebody who can't cross the landing in bear feet going to the loo without stubbing my toe this is not for me - then there's nettles and thistles . 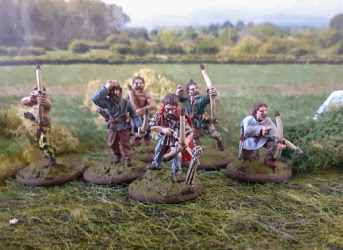 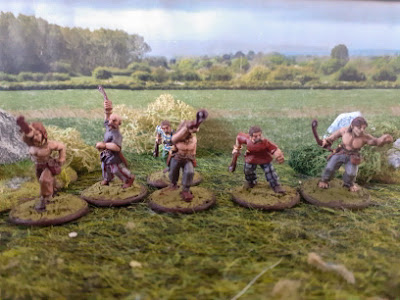 Tribal slingers , I always find slingers boring , don't think these are the best figures out there but I needed some . If you click on the photos this should enlarge them (new blogger permitting)

Clearing up the painting tray . 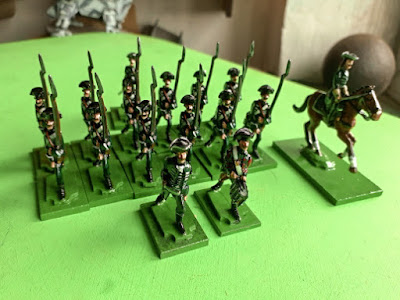 I've had these awaiting varnishing for a week or two as I ran out of yacht varnish , but with the easing of 'lock down' I've got a fresh one . They are the second unit for my Freikorps Von Kleist's 'Green Croats' with a mounted officer to command the two units . They are of course Prince August SYW molds which I've cast up myself . 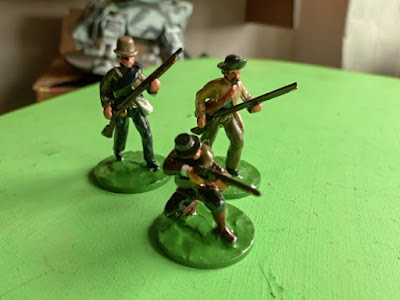 I also got these 3 Irregular 40mm figures done, they will be joining the ranks of the 'Black Hand' or the Hellenyk Republic irregulars - again 40mm Irregular figures . 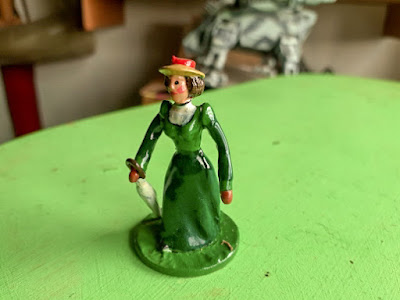 The final figure is this Irregular Deutsch Homage 40mm , haven't got a back story for her yet - Mary Poppins ? - Agatha Christie ? . These will be appearing on my tabletop soon . Having got these finished I can continue painting up my 28mm SPQR figures .

A bit of progress after a fraught week . 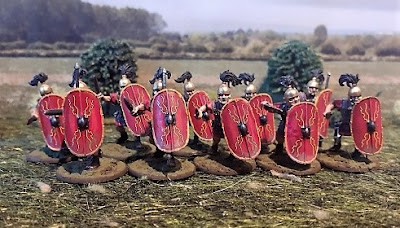 I've been having computer problems this week which is VERY annoying ! . It turned out I needed a new key board , I did think I had a spare one but couldn't find it so I had to get a new one at the supermarket - the following day I found the one I already had ! - 'blast' ! . On the painting front I've got quite a few ancient figures glued up and painted for my SPQR project . These 10 Romans are first up - they are 28mm Warlord plastics , I used he shield transfers that were provided - bit fiddly but look nice when done . 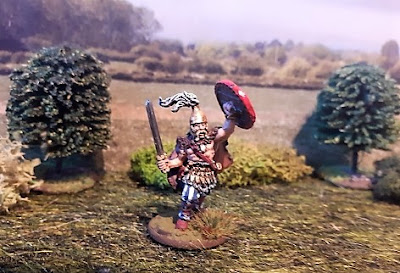 A Gallic hero , again Warlord and this one is a new resin model.  I quite like their new resin figures flexable but not bendy if you know what I mean . 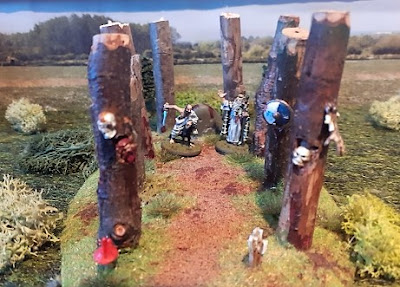 The Gauls needed somewhere for their Druids to hang out , so I revamped 'Woodhenge' , This was a model I made about 20 years ago which I found whilst looking for that b****y keyboard ! it was rather worse for wear but a bit of TLC has got it back in operation . 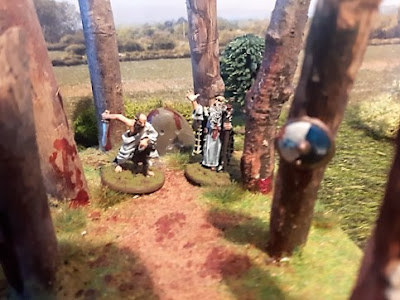 Here we see it being re-sanctified to the Old Gods with the sacrifice of a black ram - both figures again by Warlord - not sure the Romans will be happy about this - cue the next scenario .....