The Battle Of Mission Concepcion.(Part One) 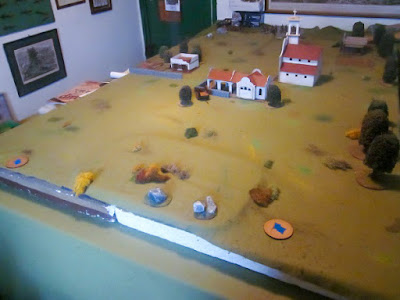 This is a game played using 'Sharp Practise'  , the Mexican army under Colonel Ugartechea has surprised a Texian force based at the Mission Concepcion and their task is to drive the rebels from the table and capture their deployment zone . Here we see the Mexican initial deployment markers (discs with blue flags) where they will appear on the table . 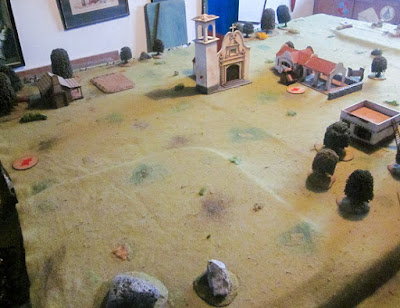 The Texian end of the table with their deployment markers , the one nearest the table edge on the left is the one the Mexicans must capture to win , the other in the centre is a secondary one where Texians can deploy but has no tactical significance . 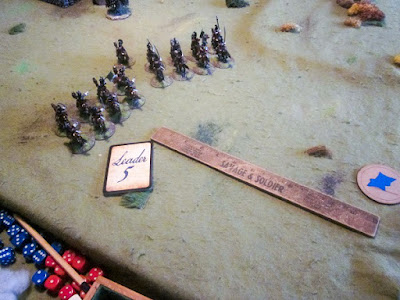 When a Leaders card is drawn he and the units under his command can deploy . Here they can deploy at 18" - 12" for being cavalry plus another 6" for being out of sight of the enemy deployment marker. 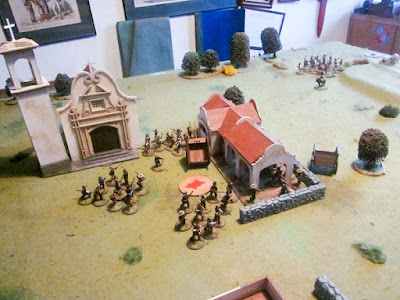 The Texians get lucky and draw two leader cards, each leader has two units of militia under them . I decided to deploy them on the secondary point to hold up the Mexican advance . Being infantry they  have to deploy within 6" of the marker. 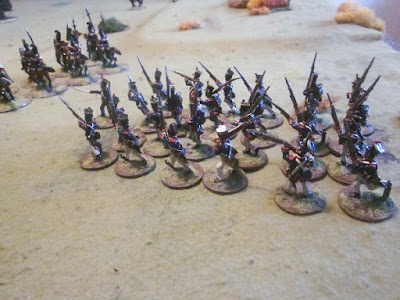 The Mexicans draw another leader card and three units of infantry appear . Then the 'Tiffin' card was drawn and the move ends,  the cards are re-shuffled ready for move two. 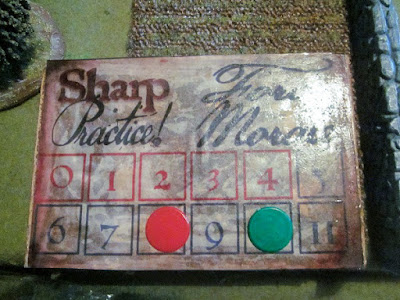 The two forces have an initial morale which diminishes as bad thing happen . The Texians are on 8 (militia) , the Mexicans 10 (regulars) . Too be continued …….

I Knew It Would Come In Handy Sometime. 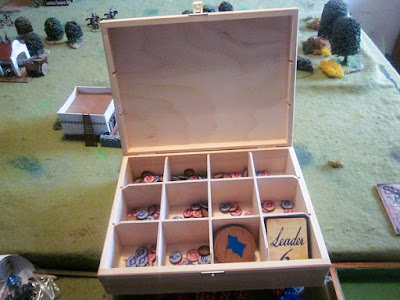 I found this box on a skip at work about ten years ago and thought 'that could be useful' , so I brought it home and put it in the spare bedroom (the depository for all useful things) and there it sat . It has been threatened with the dustbin several times but I've managed to save it . It originally housed teabags I think and had the faint smell of tea . For 'Sharp Practise' you need markers for disruption points which when accumulated prevents the units from functioning properly , I got some off EBay which are marked 1-10 and I have them in blue and red . However finding the relevant ones where a problem - then I remembered my 'useful box' - there are segments so that they can be sorted from 1 to 10 , a space for other markers and the cards fit in the last one ! - I KNEW it would come in handy ! (still probs with the Internet, an engineer has been dispatched and arrives on Tuesday - we await with anticipation !)

Email ThisBlogThis!Share to TwitterShare to FacebookShare to Pinterest
Labels: Others, Sharp practise

For some reason an announcement has started appearing when you come onto my blog about 'cookies' - I was momentarily interested in this - thinking of American biscuits - but I fear it isn't !? . I'm having problems with the Internet , BT have fixed the line in but my provider thinks it could be the modem  and has dispatched another one , hopefully this will fix it ! - I hate technology when it misbehaves , so there maybe interruptions in posts , I'll keep you posted .....
Posted by The Good Soldier Svjek at 09:53 2 comments: 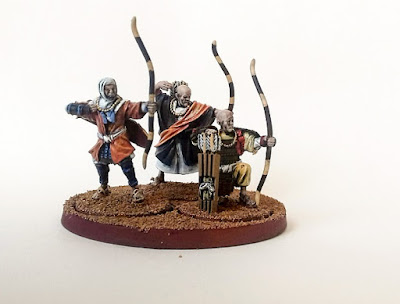 Back from the hols only to find problems with the Internet/phone system (oh ! the temptation to smash inanimate objects to smithereens !) and back to painting . I have lots to do but felt the need to dabble in a couple of periods which have been dormant for a while rather than something worthy . The above are Warrior Monks from 'Warlord' in 28mm for my 'Test Of Honour' project which scratched my itch for something fancy in 28mm .

The next is to start the Hessian Leib-Regiment in 10mm from 'Kallistra' for my AWI collection , this is more worthy as they have been undercoated and awaiting paint for over six month , ah ! the life of a 'wargaming butterfly' . Just noticed that both sets of figures need their bases finishing . Hopefully I will get back to a semblance of order in my painting schedule in a week or so. 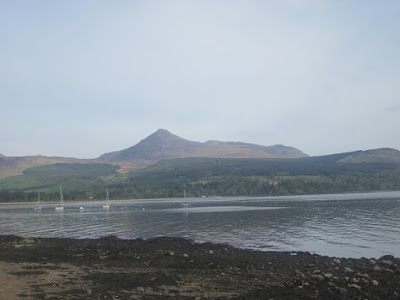 Whilst I'm on holiday to the Isle of Arran

Posted by The Good Soldier Svjek at 01:02 No comments: 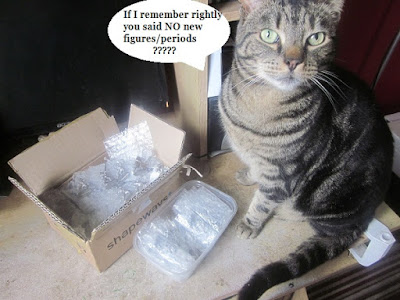 So I was surveying EBay and noticed somebody selling 40mm Prince August SYW figures , Now I have suitable moulds and could cast up figures myself , but these were their new SYW figures . I had admired these  but decided not to buy them as I already have lots of moulds  . I kept an eye on them and nobody seemed interested - two groups of 30 figures , one Austrian , one Prussian - Hmmm ! I could use the Prussians with my Allied army - then I noticed in the written information that he was selling the moulds as well  - that's 30 figures and two moulds for £30 !!!! - so I placed a bid ! 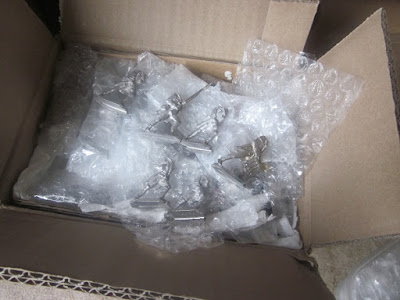 Nobody else bid for them ! (strange) and I won them - so I bid for the Austrians about four minutes before the time was up - and won them as well . Today two heavy boxes arrived, the figures with their heads and weapons etc individually wrapped - nicely cast as well ! 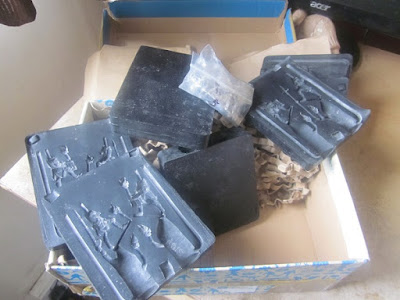 Here are the moulds , now I know at the beginning of the year I was hoping to keep the figure purchases down - BUT I think this was too good a deal to miss (desperately try to justify his buying more figures) . Got to unpack all these and start gluing equipment and heads to them - but I must get my Tex-Mex stuff finished first. 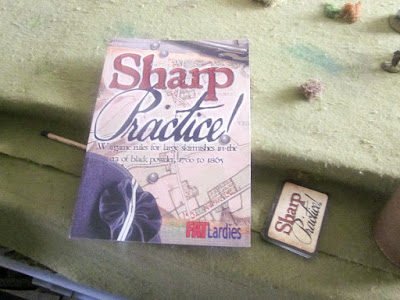 So having re-commissioned my Tex-Mex collection I cast about for a set of rules , I bought these off EBay breaking a rule I have that rules MUST have a play sheet , 'Sharp Practise' don't because the author says you don't need one - I beg to differ and found a fan published one on a forum and printed then out. . 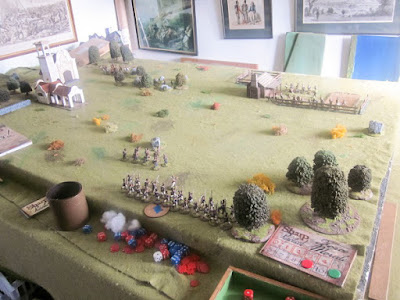 From this somewhat rocky start I set up a game and played a test game . It's not that the rules are complicated - the mechanisms in themselves are fairly simple based on D6's , it's just that there are quite a few rules and the complications start with the command and control . Cards are drawn to activate leaders of various qualities and these are enhanced by command cards . The turn can end at any turn of the cards when the 'Tiffin' card is drawn , this I find makes it easy for solo play . 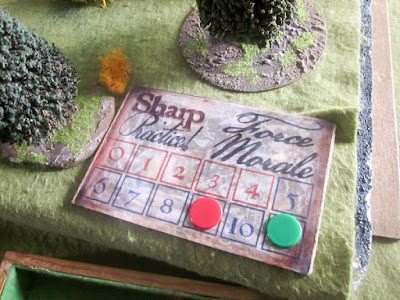 The forces morale is tracked and drops as nasty things happen . These rules seemed to be very popular with people who like them and I can see where they are coming from , it's just getting used to the rules and their various quirks . 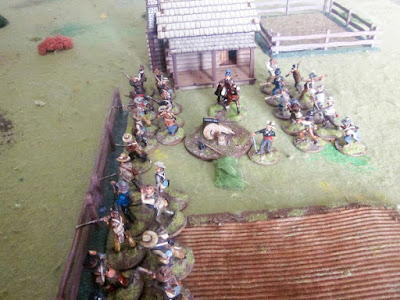 The objective of the game was for the Mexicans to capture the gun from the Texan 'rebels' , this was based on a early skirmish when the Mexicans tried to reclaim a gun that had been given to the settlers to protect them from raiding Indians. 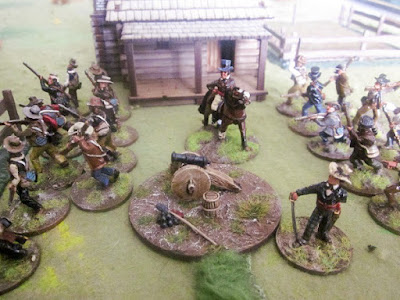 A closer look at the 'Gonzales Come And Take It Gun' (by Boot Hill Miniature) the figures are 'Old Glory' 28mm . 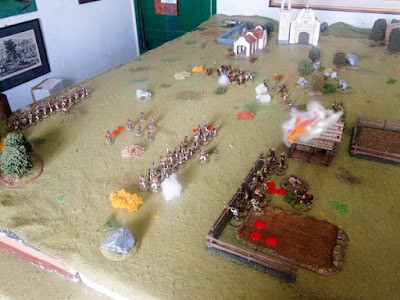 The games afoot ! The cabin has been set on fire by a random dice throw , the red markers are 'disruption points' (DP) , the cotton wool marks if units have reloaded or not . At first I was a little cool towards these rules as I don't like learning new systems - BUT I am coming around to them as they will handle I think the small skirmishes which made up the majority of actions in this war . With most wargaming rules you have to cause casualties and remove figures to win but with these the DP's start to make your forces unusable without loosing lots of figures which seems right with this conflict when casualties were not great (Alamo and Goliad excepted) . I'm going to set up another game and try again with a better grasp of the rules . I've also got most of the figure revamped which I'll illustrate next.