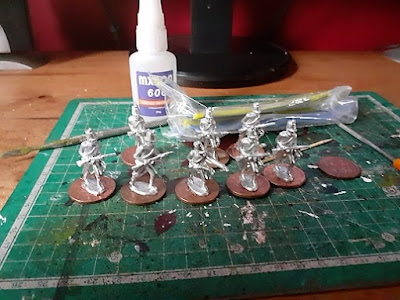 Think it's time to get back to 'proper' wargaming so I've started preparing these Irregular 42mm figures . Now next to artillery limbers and teams the one thing I hate painting is dismounted cavalry - that deja vu feeling as you paint the same figures again - minus the horse . But like limbers they really grace the tabletop and once done look the business . These are to be the Hellenyk Green Hussars , so they are next up on the painting tray . 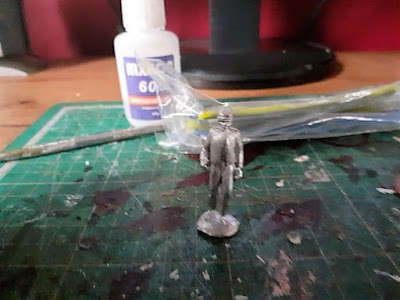 Irregular Miniatures are kind enough to sometimes send a sample figure with your order and I was lucky enough to receive this 42mm ACW artilleryman , nice but not immediately useful - however I have a plan to convert him - 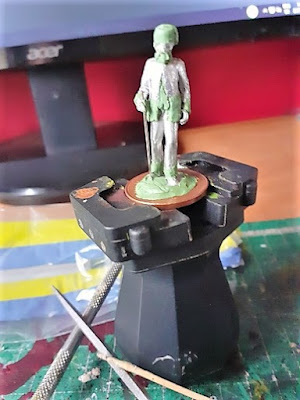 Enter Kamul Ataturke the head of the Sublime Porte Secret Service hot on the trail of the 'Black Hand' rebels . More of him later when he receives his coat of paint .
Posted by The Good Soldier Svjek at 12:09 4 comments:

A problem solved and a bit of whimsy . 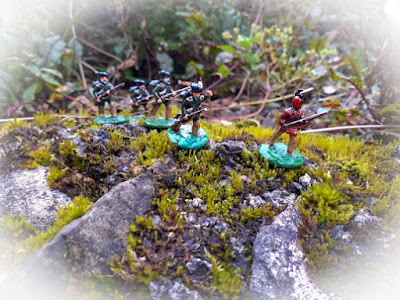 So my new screen for the computer arrived this morning very promptly and  we are back up and running . To celebrate this I've taken a few pictures of my 25mm Miniature Figurines which I use for my Featherstone 'Close Wars' rules . Newly varnished a patrol of Rogers Rangers set out lead by an Indian scout (who we hope is reliable) 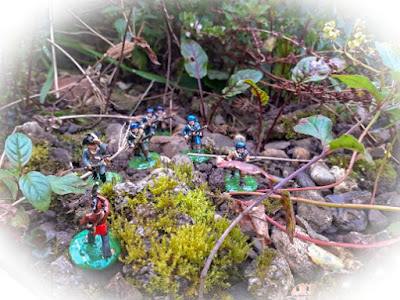 An Indian scout reports back to a French Officer and some Canadian Militia  , not the same Indian I must add so no treachery afoot !. 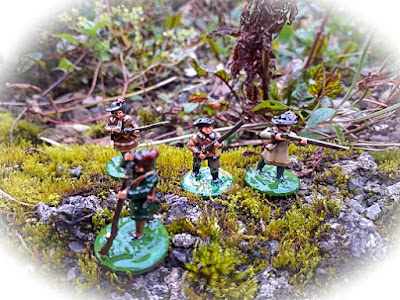 A group of Woodsmen / Settlers , these have been painted a while but their first photo shoot I think . I've got just a few more figures to paint in this project , so hopefully will get them done soon .
Posted by The Good Soldier Svjek at 06:48 8 comments:

I've been having problems with my computer screen which I've only had for a few months and it's finally died on me  , so until Amazon deliveries a replacement I'm having to use my tablet to post this which I find awkward in the extreme . This week I've been playing the socks off C&C Jacobite Rising which has been very enjoyable but not very photogenic so I'll leave you with this piece of humour reaped from the internet. 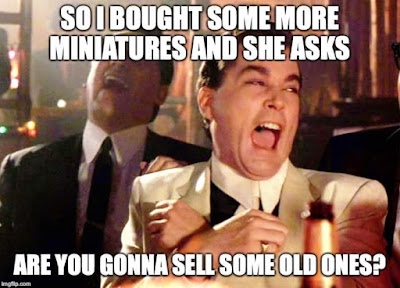 Posted by The Good Soldier Svjek at 13:34 No comments:

VERY early Christmas present to myself . 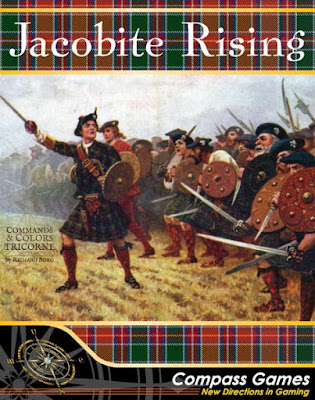 Having sold some surplus figures on eBay and the cash burning a hole in my pocket I decided to buy the new Command & Colors boxed game 'Jacobite Rising' and consider it an early Christmas present to myself (once again seeking to justify spending money on my hobby) . I'm a big fan of the C&C system so this was always going to be a must buy and I'm not disappointed with the game , it uses a similar system to the AWI Tricorne box by Compass Games which uses two sets of cards, the usual 'Command cards' and a deck for each rival army of 'Combat cards' which help to define the different tactics , strengths and weaknesses of the combatants . 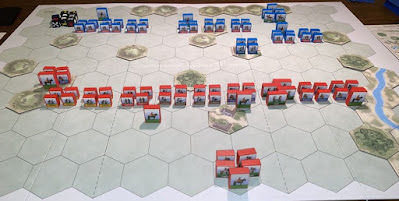 Above is the first scenario 'Killiecrankie , the Government army nearest the camera and the Highland army with blue blocks on the lower slopes of Creag Eallich and the River Garry on the Government right  . The game has 13 senarios spanning from Killiecrankie 1689 through to Culloden 1746 each has its own victory conditions and special rules where necessary . One of the rights of passage about block gaming is the fixing of the stickers to the blocks - a thing many players of C&C hate but which I find therapeutic ! Well with the first game set up I'm off to see if I can change history and beat the Jacobites .
P.S. I have just heard that my gaming colleague 'A' has succumbed to the lure of this box and has purchased it as well ! .
Posted by The Good Soldier Svjek at 06:31 14 comments:

Email ThisBlogThis!Share to TwitterShare to FacebookShare to Pinterest
Labels: C&C Others 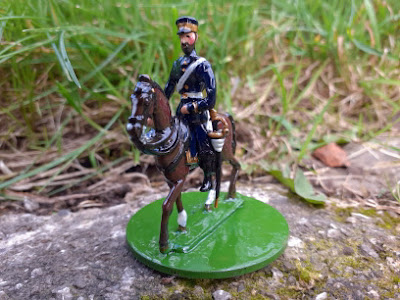 I've had a few figures awaiting a coat of gloss varnish after my last tin finally died on me , due to the present pandemic I've not been going into town much but I had to have a flu jab so whilst in there I called into my local DIY store and got a new can . Here is a Hellenyk Republican General , he's a Irregular 40mm Deutsche Homage , I also took the opportunity of the absence of the dog to photograph him outdoors . 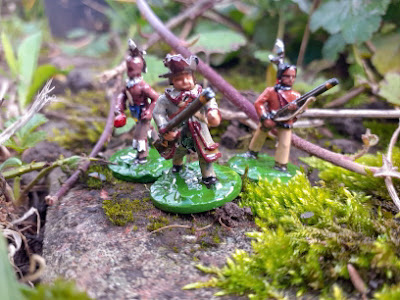 I also varnished some 25mm Minifigs for my Featherstone 'Close Wars' . Here we see (Left to Right) Chingachgook , Hawk-eye and Uncas on the lookout for Magua . 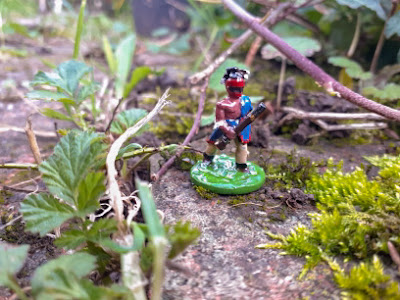 'He's behind you !' - Magua the villain from The Last of the Mohicans  , again a 25mm Miniature Figurine . I've got a few more of these to finish off and they are due a return to the gaming table soon .
Posted by The Good Soldier Svjek at 12:09 13 comments: 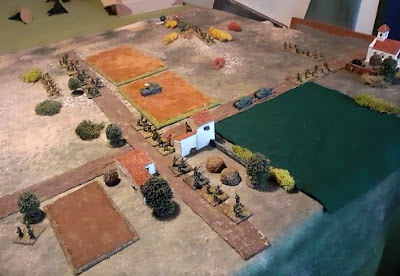 The first moves see the Nationalists seize the crossroads and their tank holds the center as the infantry prepare to assault the hill . The Republican tanks and infantry move down the road to try and capture the crossroads as their infantry take possession on the hill . 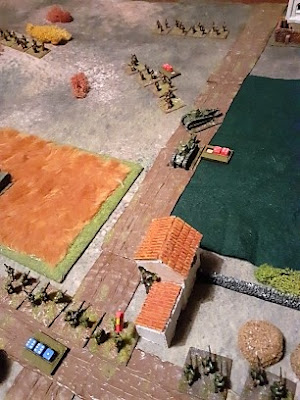 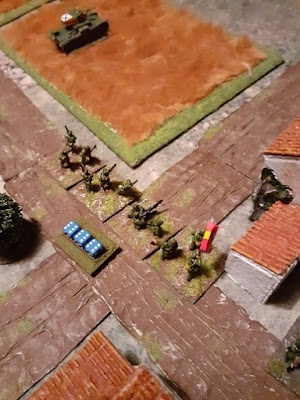 I've made some mini dice holders to keep score on the casualties unit suffer , here the poor Heavies have enough to take them off the table. 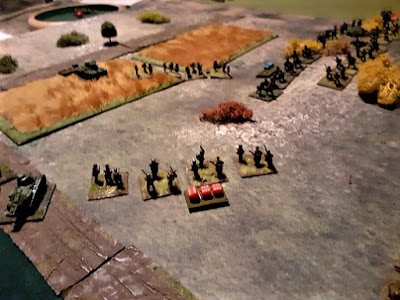 In the center the Republicans lost a unit to a combination of tank and infantry fire and a chance card that made them panic and get a D6 extra casualties . 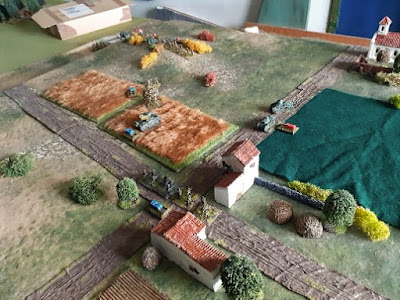 The Nationalist assault on the hill was driven off with heavy casualties , but the Republicans lost another Infantry unit in the center . The Nationalists still held the disputed crossroads but were suffering a lot of casualties from the enemy tanks . 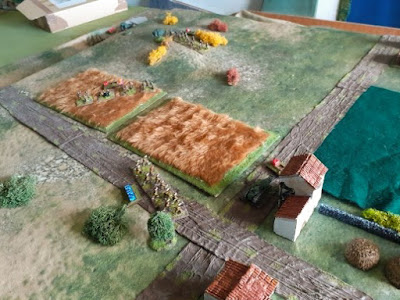 The Nationalists lost their tank unit and had to retire to the crossroads after the infantry there were eliminated . The Republicans were able to detach their Heavy Infantry from the hill and move up across the corn fields to pour fire into the retiring Nationalists . The Republican tanks moved up to take the crossroads and win the scenario. The Republicans lost 3 units and the Nationalists 5 , so a convincing win for General Benavente as he captured both objectives . The Nationalists have had to pull back to lick their wounds and I'm going to dice for the next scenario and for the forces which will take part in it . The game was very quick to play and the use of the chance cards added a new dimension to the game .
Posted by The Good Soldier Svjek at 12:49 8 comments: 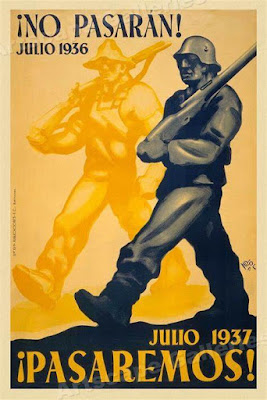 I've been looking through Neil Thomas's 'One Hour Wargames' book wondering how to use it and hit on the idea of using his 'Machine Age' rules from the book with my 15mm Peter Pig Spanish Civil War figures .  He mentions playing a campaign using 5 of the 30 scenarios in the book and linking them loosely together . The forces are decided by a dice roll and use a maximum of 6 units per side which is great as I can do this by the existing figures I have with minimal painting of figures . 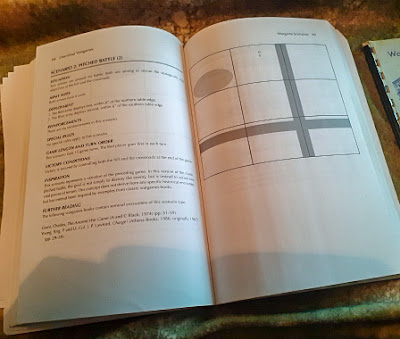 The first scenario - a pitch battle - you dice for a scenario from each group of 6 scenarios . The forces deploy 6" in from the top and bottom of the table and the victory goes to the whoever holds the hill and the crossroads . 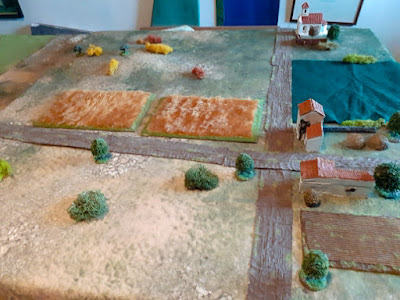 The table as set up , the buildings, walls etc are purely scene dressing and do not influence the game . The crossroads are nearest the camera and the hill top left . 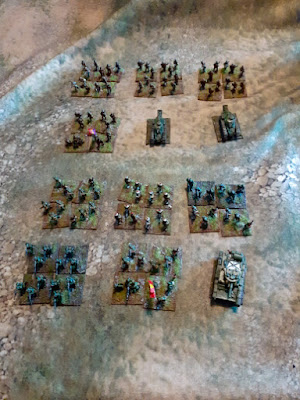 The forces , at the top the Republicans 3 infantry units , a heavy infantry unit and 2 tanks .Nearest the camera the Nationalists 4 infantry , a heavy infantry and a tank . He uses only 4 troop types in the rules but as I didn't have any cavalry painted I substituted tanks which are mentioned as an option . The Heavy infantry represent troops with heavier armament and better morale . 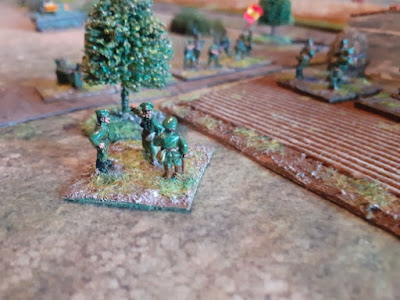 The Nationalist General Luis Rosales deploys his troops ., is he saying "I want that tree cut down for a start !" ? 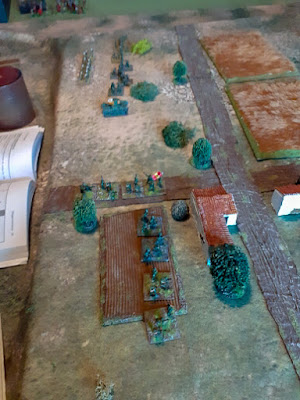 The Nationalist army, nearest the camera an infantry unit and a heavy infantry on the road to seize the crossroads and hold them , in the background 3 infantry and a tank unit which will attack the disputed hill . 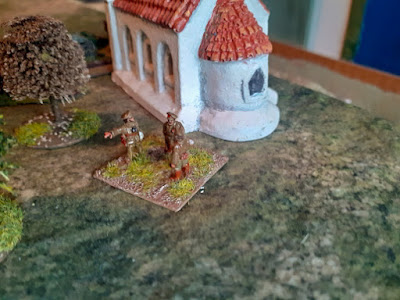 The Republican commander General Jancinto Benavente discusses his strategy with his staff . 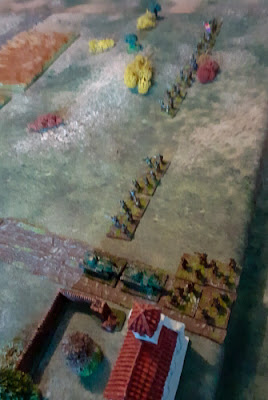 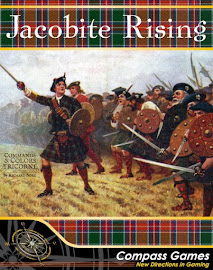 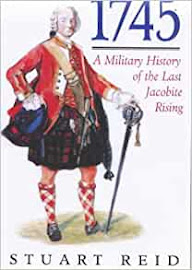